Andrew Leon : Wednesday #Books : The House on the Corner 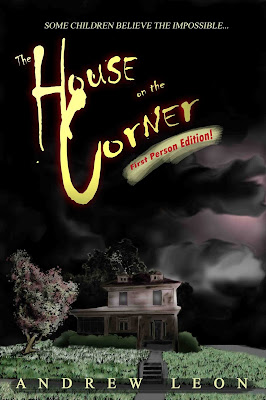 She frowned at me, “Where did you hear about imps, Sweetheart?”

“Elli said there would be imps outside tonight, and imps are mean because they’ve been constipated by demons from living too close to Hell.”
Everyone stared at me. I hate that. “What?” I said and made a frowny face.

“What did Elli say about the imps, Sweetie?”

Everyone started laughing. Everyone but me. “What’s contaminated?”

Tom said, “Contaminated is like when something is polluted. Pollution contaminates the Earth.”

“What does that mean? Imps aren’t the Earth.”

That made more mad than when they were laughing before. “What! What does it mean?”

“Constipated is being full of poop,” Sam said and kept laughing.

“Maybe imps are constipated! Maybe that’s what makes them so mean!” laughed Tom.

Sam fell on the floor laughing, “They’re contaminated with constipation!”

Mom rolled her eyes and shook her head, “Boys… Just ignore them.” She opened the door and walked out with me.

If you’re an author and would like your book excerpt featured,
drop me an introductory mail with a link to your book at  atozstories
at gmail dot com. I’m now accepting submissions for features in January.