B for Based on Principle Alone: #atozchallenge fiction 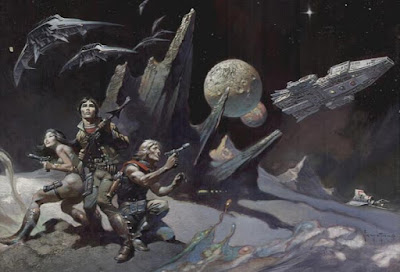 Today’s prompt (the beginning of the story in bold)  came from Nicole and the picture prompt was sent in by the Ninja Captain himself—very sci-fi, right up his alley! I chose them together because the scene looks like fight-or-flight—and principles are great things to fight for.
————-

Based on principle alone, Yani did not shoot up a flare.  His heart seemed to beat outside of him–it hammered in his veins, throbbed in his head, echoed by the thrum of the machines that zipped above them as they crouched under a crag at the deserted Tgren beach. These two are scum. Let the Tgrens have them.
Blocking the two out of his mind for a moment of respite, Yani gripped his weapon hard, because that seemed like the only way to keep a grip on himself—not shoot the other two, or get all three captured. He could not let them know he had seen them at it, that he wanted to punish them, and punish himself for trusting them. That is not the Cassan way.
She looked at him with that queer angle to her face, which meant she was curious. Of course, she is curious. She can’t reach me. I need to stop thinking about what I saw– here I am, standing between my wife and my best friend, the classic cuckold, and their lives depend on me. …..but, so does all of Cassa.
He relaxed his barriers. His senses reeled under the attack of her jocular staccato : Cassa calling Yani, how long are we going to be here?
Till the ships stop looking, he smiled at her. For now, they needed to work together. But only for now.
——-

Alex, if you’re reading this, I meant it only as a bit of harmless fun. I haven’t read much science fiction, or Cassafire, so this is just random silliness in playing with the names of Tgren and Cassa that I hope you’ll forgive in your usual hearty way.

If not, let me know and I shall duck for cover 🙂