Behind the Guns of Muschu

By Damyanti Biswas18/09/2013Uncategorized
8 Comments
Share
Share Tweet Share Pin
Love0
Today’s Wednesday feature book is one that led to a recent expedition to Muschu Island and the discovery of the remains of four of the
commandos lost in a Second World War raid: Guns of Muschu by Don Dennis. 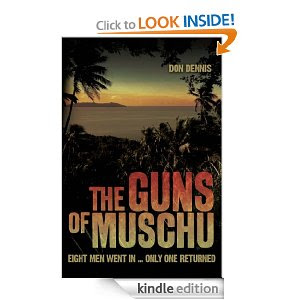 Nine days later, on the New Guinea mainland, the only survivor staggered back
through the Japanese lines to safety…

This is the remarkable, true story of that survivor.

Teaser Excerpt:
Attack
on Wewak
Beneath the aircraft the ground unravelled like a green conveyor,
the hills giving way to the neat squares of palm plantations near the coast.
Sighting a road, Smith checked his course, then saw the harbor ahead and lined
up on a row of warehouses. There was no sign of the freighter mentioned in the
briefing – it had probably left the harbor before dawn. The dock area was
stacked with cargo, a line of trucks suddenly breaking ranks as warning of the
approaching aircraft sounded.
Smith held the Beaufort steady and aimed at the cargo stacks.
Howling low over the dock, he heard the navigator call “bombs gone” and felt
the aircraft lurch as the load fell clear. Behind him the dorsal gunner’s twin
303s were hammering away and in the nose the navigator joined in with his .50
calibre, the stench of cordite filling the cockpit. Banking further right to
track along another line of warehouses, he sensed rather than heard the impact
of the bombs behind them. Flicking off the gun safety, he pressed the yoke fire
button and opened up with the two wing mounted fifty calibre machine guns.
Using tracer to aim he marched the rounds into the waterfront buildings before
banking left over the port and swinging into a wide turn that took them out to
sea.
It was then that they were hit…
——
Buy on Amazon.
—-
If you’re an author and would like your book excerpt featured,
drop me an introductory mail with a link to your book at  atozstories
at gmail dot com. I’m now accepting submissions for features in January.