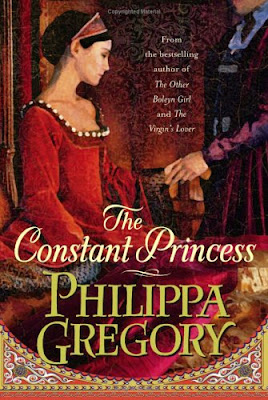 Thanks to the Guess that Character Blogfest run by Jennifer Dalker, or Jen, as she is known amongst her blog-friends, I got a whole load of visitors and comments and compliments, and about 20 new followers!

A big wave to everyone who came by and commented, or followed. Thank you very much indeed!
My weekend got a little crazy, so I could not visit everyone I’d have liked to, and I was travelling yesterday, so here I am today.

On the flight and at airports and in cabs, I managed to almost finish the historical novel “The Constant Princess” by Philippa Gregory, an author I’d never read before.

This is the the story of Katharine of Aragorn, and though the gist of the story has been known forever, I love the way Gregory has breathed life into this princess, whose later life as the wife of King Henry VIII is so familiar to those who have watched the series Tudors on TV. But in this book we see Katharine as the young princess Catalina, and we see the Spanish backdrop she comes from, and that is indeed a treat.

The writing is vibrant, and Gregory’s portrayal of England and the English through the eyes of the Spanish princess used to the luxuriant gardens, abundant sunshine and regular baths is a story in itself. I particularly like how Gregory has managed to bring each character to life, at how I saw Catalina’s powerful, ambitious and at times cruel parents (who are mostly off-stage throughout the novel), the King– her lecherous father-in-law, Arthur- the almost too perfect boy-husband, Harry-the precocious prince.

Gregory, in taking the viewpoint of a strong woman, has underlined how women in England, even powerful women, did not have much power at the time, their only recognition being the males to whom they were either wives, mothers, or daughters.

Finally, the lush setting, the painstaking depiction of all the various backdrops is nothing short of mesmerizing, because I usually tend to skip descriptions and I didn’t do that with this book.

My only (tiny) crib was the over-poetic romance between Arthur and Catalina, and though Gregory has worked hard to give it credibility by rich characterization and information on Catalina’s religious and moral upbringing, it rang a little false. A brief, tumultuous romance at 16 is hardly the sort of thing that would stay with a girl of Catalina’s character, and I’m a little disappointed that the otherwise “real” depiction of her does not include even a brief forgetting of the husband of her faraway youth, and no other relationship/ attraction/ flirtation even…..the scene of her first night with Harry seemed very unskilled for a woman who has gone through her experience of the world in the intervening years before her second marriage.

The reviews of “The Constant Princess” have been mostly positive, and given Gregory’s immense story-telling skills, I’m not surprised. I haven’t read too many historical novels before, and this novel published in 2005 is exactly the sort of easy reading I crave sometimes. I will look out for Philippa Gregory’s other books.