What Do You Know about Blood Spatter Evidence? 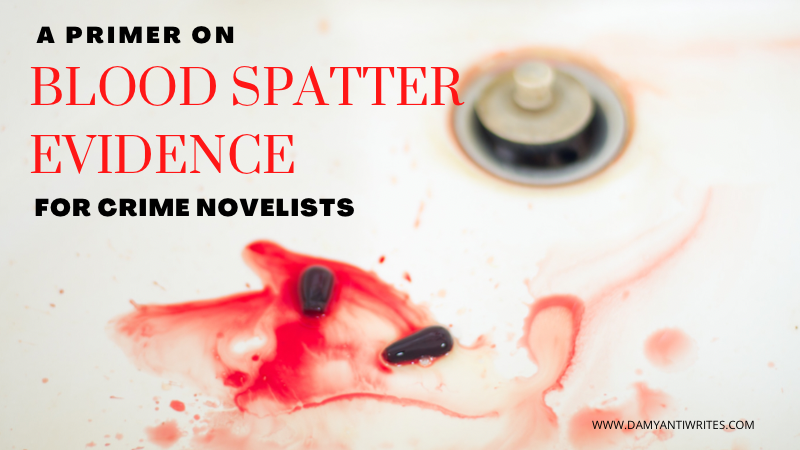 Blood spatter evidence is crucial in the sequel I’m writing to The Blue Bar, my literary crime novel being published by Thomas & Mercer. It is a subject I knew relatively little about, beyond the crime documentaries (and an occasional episode of Dexter) I’ve watched on television, which demonstrated how the study of blood spatter can lead to nabbing the culprit. Forensics is a complex science (some would even call it art), so I thought of hosting Melanie P. Smith, who certainly knows a lot more about it than I do.

Long before she delved into the world of fantasy and suspense, Melanie served nearly three decades in the Special Operations Division at her local sheriff’s office working with SWAT, Search & Rescue, K9, the Motor Unit, Investigations and the Child Abduction Response Team.  She now uses that training and knowledge to create stories that are action-packed, gripping and realistic.  When Melanie is not writing, she can be found riding her Harley, exploring the wilderness, or capturing that next great photo.

Take it away, Melanie!

The Importance of Blood Spatter Evidence in Crime Detection

Blood reacts differently according to certain scientific principles.  Trained professionals can examine blood spatter patterns and draw conclusions as to how that blood was shed.  Crime scene analysts gather information from these blood spatter patterns, transfer, and other marks to recreate the sequence of events and how those patterns were created.  They use the evidence gathered–size, shape, distribution, and location– to determine what did or did not happen.

The adult human body contains roughly 8 to 10 pints of blood, depending on body size. A human must lose approximately 40% of their total blood volume before they are at risk of death from blood loss.  When the human body suffers trauma, liquid blood will escape from the body. How much blood depends on the extent of the trauma and the type of wounds.

The Role of Blood Spatter Evidence in Crime Scene Analysis

When the trauma is the result of assault, the police typically become involved. Experts will analyze the scene to determine:

Police can learn a great deal from blood spatter evidence. Often when police first arrive on a crime scene, the only thing they know is someone is reporting a crime. If it is a crime of violence, there will almost always be blood. How much blood, how old the blood, and the bloodstain pattern(s) can tell the police a great deal about what happened, where it happened, when it happened, and what type of weapon was used.

Analysis of the blood can tell the police if it is animal or human. If human, it can tell them male or female,  if all the blood at a crime scene is from the same human, or more than one human. And DNA can tell the police whose blood it is. When investigating a crime, the police will photograph the patterns; and, once the initial walkthrough and analysis is complete, they will sample the blood for DNA testing.

If a crime scene involves a dead body, blood lividity (settling of blood in the body after the heart stops) can tell the police approximately how long the person has been deceased, and if the body was moved after death.  When writing a scene where you plan to use blood spatter evidence to drive the plot, keep in mind that the first officers on scene are not typically trained in analyzing blood spatter evidence.  Upon arrival, the uniformed officer will likely secure the site, ensure the crime is not still in progress, and then call in the professionals — usually detectives, to reconstruct what happened.

So, what will the detectives do once they arrive on a scene where blood has been shed?  They will focus on blood spatter, and the analysis of bloodstain patterns.

Blood is in a liquid state when inside the body, and when it exits the body, it does so as a liquid, but it doesn’t remain a liquid for long. Blood will begin to clot within a few minutes, forming a dark, shiny gel-like substance that grows more solid as time passes.  How, as authors, can we use this in our writing?  Well, the gel- like substance becomes more solid as time passes.  If you want the body to be discovered after several hours, your detective, with the help of forensic support, can analyze it to determine the approximate time the crime occurred.  Also, the presence of blood clots within the pool would indicate the attack was prolonged, or that the victim was bleeding for some time after the injury occurred.

Blood can leave the body in many different ways, depending on the type of injury inflicted. It can drip, flow, spurt, gush or just ooze from wounds. It can even spray when acted upon by outside forces. Bloodstains are classified into three basic types:

— Blood spatter: passive blood stains — This would include drops, flows and pools. These typically result simply from gravity acting on the blood as it leaves the body. When drops of blood hit the floor, they produce elliptical stains. Blood spatter analysis can trace the blood and determine where it originated, map the pattern across the floor to determine direction of travel, and using basic geometry can determine the impact angle from these elliptical stains.  These types of stains can fall from an open wound, or may drip off a piece of clothing or a weapon.  They can also determine the speed the person was traveling at the time of the drip.

— Blood spatter: transfer stains — Transfer stains result from objects coming into contact with existing bloodstains leaving behind wipes, swipes, or pattern transfers of blood such as a bloody shoe print or handprints on objects or surfaces, or smear from a body being dragged. They could indicate signs or a struggle, or an attempt to clean up the scene, or escape quickly.

— Projected or Impact Blood spatter — Impact stains result from blood projecting through the air and are usually seen as spatter, but may also include gushes, splashes, and arterial spurts. Impact blood spatter is created when a force is applied to the blood source such as cast-off from a slinging object, spatter from blunt force impact from a club or bat, or projected spray/mist from gunshot impact.

— Cast-off blood results when an object swung in an arc flings blood onto nearby surfaces. This occurs when an assailant swings the blood covered object back before inflicting another blow. Analysts can tell the direction of the impacting object by the shape of the spatter droplets (tails point in the direction of motion). Counting the arcs can show the number of blows delivered. Imagine dipping a paint brush into a can of red paint, then flicking that brush and letting the paint fly two to three feet and collide with a white canvas.  Medium velocity stains are generally caused by a blunt object, a fist, or a severed artery.

–Gunshot spray/mist will vary depending on caliber of the gun, where the victim is struck, distance between the victim and the gun and location of the victim relative to a wall or other surfaces. Gunshot spray/mist stains are distinct and leave little doubt a gun was involved.  It is impossible to reproduce the mist left from a gunshot wound, which is why they are easily identifiable to experts.  However, if you could introduce red dye into an aerosol can of hair spray and then spray the liquid onto a canvas approximately two feet away, the mist or specks on the canvas would resemble the blood mist or spray produced when struck with a bullet. High velocity blood spatter that creates tiny droplets or mist is likely from a gunshot wound.

From the standpoint of the perpetrator, blood spatter is problematic. It can’t easily  be removed from the crime scene like a bullet casing. Fine droplets of blood tend to go everywhere and get on everything, including the perpetrator himself. If time allows, much of the blood can be cleaned up and removed. At least what is visible to the human eye can be cleaned up. But some of the blood-staining will be latent, meaning they cannot be seen with the naked eye. Investigators can use chemical reagents such as Luminol to find and photograph latent bloodstains. When applied to an area where traces of blood are present, Luminol creates a bright blue luminescent glow under a black light, by reacting with the iron in the blood trace. 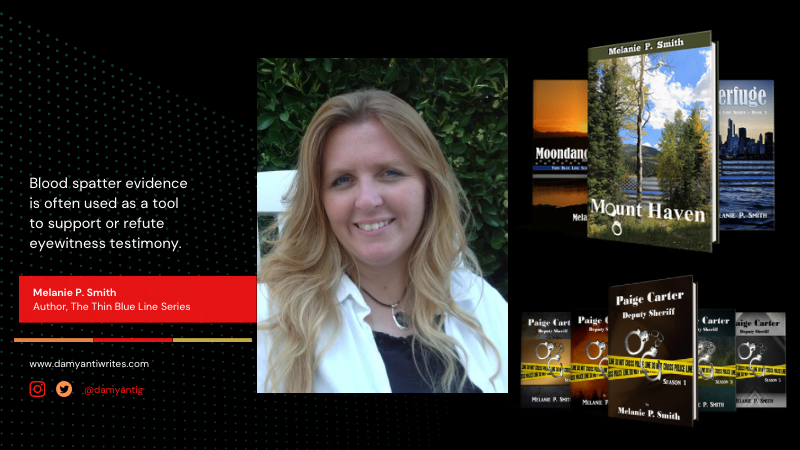 Blood spatter evidence is often used as a tool to support or refute eyewitness testimony.  For instance, a suspect may insist he acted in self-defense during the commission of a violent crime but maybe the spatter evidence shows the victim was sitting or laying down at the time of the attack, proving there was no threat and thus refuting the suspect’s statement.

In conclusion… in capital crimes like homicide, police often approach crime solving through Reconstruction. By reconstructing the crime, it will help answer the “Who? What? Where? Why? When? And as importantly How?

For the police it is not enough to know the answers to these basic questions. They must be able to prove it in a court room. This is accomplished through evidence. Eyewitness evidence, circumstantial evidence, and the most critical of all, physical evidence.

Blood Spatter evidence falls into the latter category. It is an important and valuable tool in the policeman’s toolbox, and accurately reading blood spatter patterns has become somewhat of an art form in forensic science.

Did you find this basic breakdown of blood spatter evidence interesting? Do you read or write crime fiction? Did you read my month of crime novel recommendations in April?

If you liked this post, you can receive posts in your inbox, or keep updated on my writing by clicking on any or all of the following buttons: