If you haven’t met Alex yet, I recommend you make up immediately for that lapse in your blog-visiting itinerary– not only is Alex an extraordinary blogger, but also an awesome Ninja Captain. I have the CassaFire and CassaStar and can’t wait to read CassaStorm! 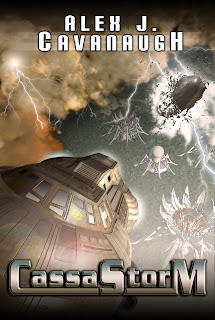 So, here’s unleashing the cover of CassaStorm by Alex J. Cavanaugh!

A storm gathers across the galaxy…

Byron thought he’d put the days of battle behind him. Commanding the
Cassan base on Tgren, his only struggles are occasional rogue pirate
raids and endless government bureaucracies. As a galaxy-wide war
encroaches upon the desert planet, Byron’s ideal life is threatened and
he’s caught between the Tgrens and the Cassans.

After enemy ships attack the desert planet, Byron discovers another
battle within his own family. The declaration of war between all ten
races triggers nightmares in his son, shaking Bassan to the core and
threatening to destroy the boy’s mind.

Meanwhile the ancient alien ship is transmitting a code that might
signal the end of all life in the galaxy. And the mysterious probe that
almost destroyed Tgren twenty years ago could be on its way back. As his
world begins to crumble, Byron suspects a connection. The storm is
about to break, and Byron is caught in the middle…

I know Annalisa through the A to Z April Blogging Challenge (have you signed up your blog on the list for this April yet??), and lurve her blog. Imho the cover for  That Sadie Thing looks creepy, in a Creepy Good kind of way! 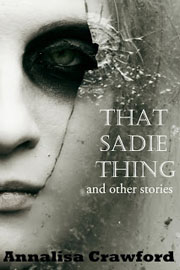 A couple
break up on a rainy night; a runaway longs to go home; a woman finds comfort
from eating lunch as her best friend lies in hospital; a teenager feels
oppressed by her father. All of the characters in these stories are trying to
find their place in the world, attempting to find connections that matter with
the people around them.

This
collection brings together prize-winning and published stories from the past
twenty years: the ‘greatest hits’.
That Sadie Thing and other stories will be available on
Kindle Monday 25th February 2013.

Annalisa Crawford lives and writes in Cornwall with a good supply
of beaches and moorland to keep her inspired. She finds endless
possibilities in the relationships between people. As this collection
testifies, she has been writing for twenty years – but doesn’t feel a
day over twenty-one.

Find her on her blog, Twitter, Facebook and Goodreads.
I’m looking forward to both these books and looking to add them to my tottering TBR pile! What books have you bought lately? What do you think of the two covers?