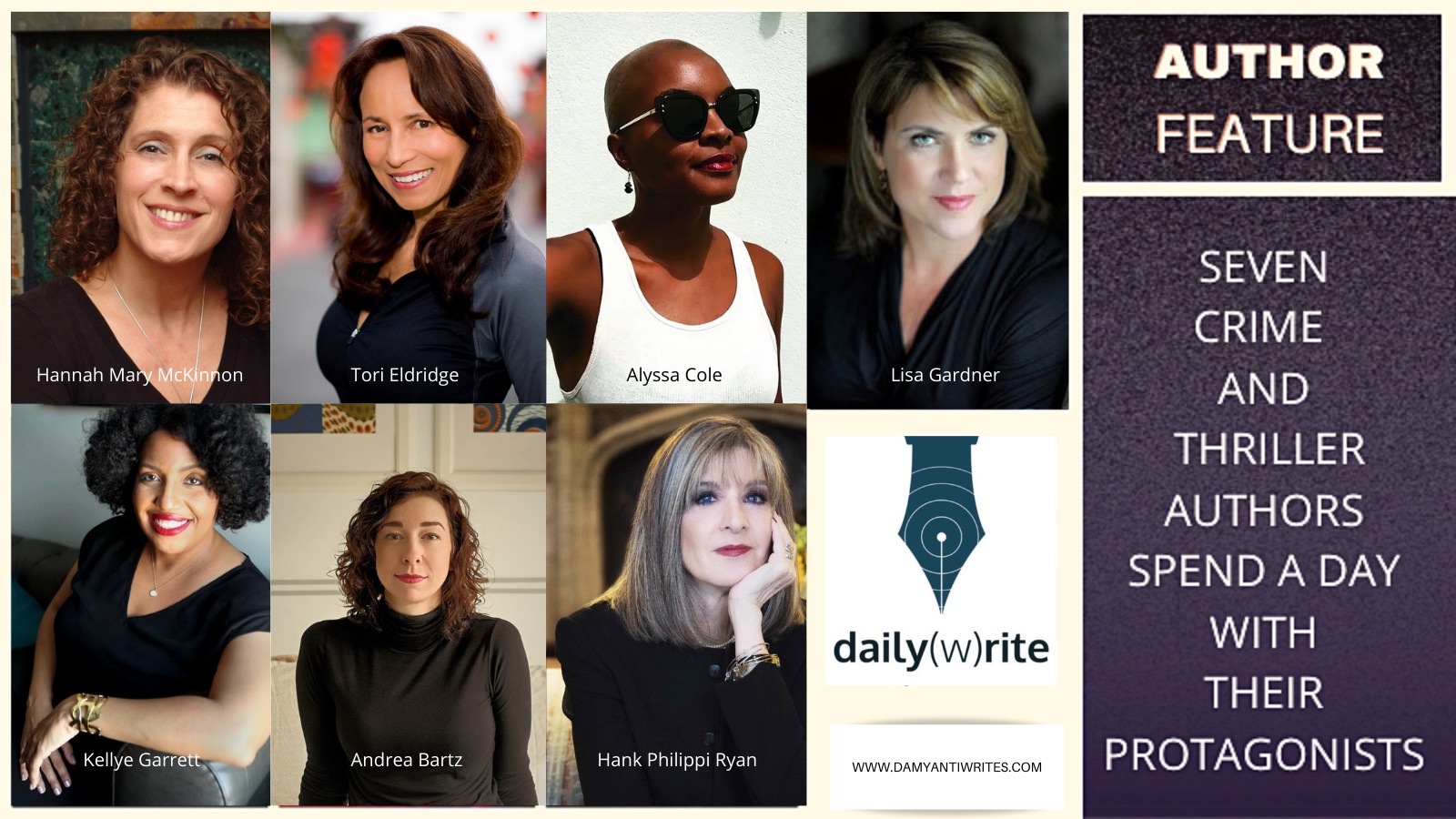 One of the joys of the writing life is reading in the genre you write in—and today I have the rare privilege to feature some of my favorite crime, mystery, and thriller authors as they tell us if they’d get along with the characters in their latest smash-hit books.

“Would you and your main character from your latest novel get along? If you spent a day together, what activity would it be on?“

These provide a tantalizing glimpse into the minds of powerhouse crime novelists and thriller authors as they think about their protagonists. I have read and enjoyed all these amazing authors, and absolutely recommend them! 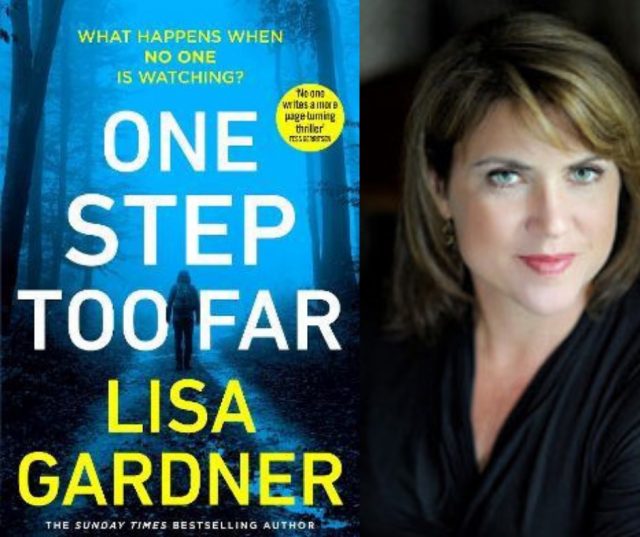 Given that Frankie Elkin works as a bartender, I can envision taking a seat before her one night.  I’ll order a glass a wine.  We’ll exchange basic pleasantries.  She’ll be curious about my career as a novelist.  I’ll be even more curious about her real job, which is to find missing people the rest of the world has forgotten.

Eventually, given that she’s a good listener, I might mention that I’m divorced but there’s no drama; it’s just one of those things.  And she’ll mention she never stays in one place long enough to form attachments, but every now and then, she remembers this one detective in Boston and wonders what might happen if she was the kind of woman who stayed.

By the second glass of wine, I’ll comment that my kid is now off to college and confess the house is quieter than I expected.  And she’ll comment that the towns are starting to blur in her mind and confess that for all the cases she’s solved and people she’s found, she’s still not sure what she’s really looking for.  Then it’ll be closing time.  I’ll pay my tab.  We’ll share a smile.  And neither of us will see each other again.

Lisa Gardner is a #1 New York Times bestselling crime novelist. A self-described research junkie, she has parlayed her interest in police procedure and twisted minds into a streak of twenty-plus thrillers. Her thrilling new novel One Step Too Far sends Frankie Elkin into the woods in search of a lost man–and the shocking truth about why he went missing in the first place. 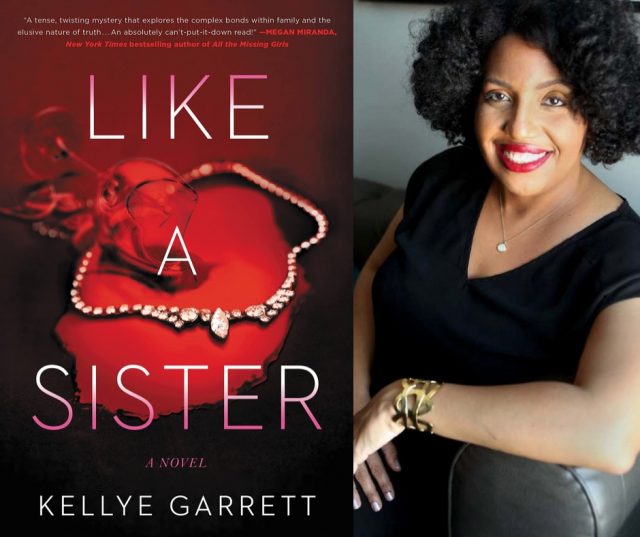 Yes, my main character Lena Scott and I are both really sarcastic black Jersey girls so we’d definitely get along very well. Lena can take a while to warm up to people so I’m sure she’d hold me at arm’s length at first but eventually she’d be like a little sister.

We’re both Grade A Instagram stalkers so we’d probably spend the day hanging out at her place in the Bronx sending each other funny Instagram memes and checking out Black Gossip accounts like The Neighborhood Talk and The Jasmine Brand while we mooched food from her Aunt E downstairs. I’d be hoping that Aunt E made mac n cheese.

If we did have an issue it’d be that I love to give my opinions on things and she doesn’t like to receive it. So I’d probably give her some advice on dealing with sisters based on my own experience with both of mine—mainly telling her that two years is way too long to not talk to someone you love—and she’d not want to take it. But overall, I think we’d have a lot of fun.

Kellye Garrett is the acclaimed author of the upcoming Like A Sister (Mulholland Books). She’s also authored the and the Detective by Day mysteries: the first, Hollywood Homicide, won the Agatha, Anthony, Lefty and Independent Publisher “IPPY” awards for best first novel and was named one of BookBub’s Top 100 Crime Novels of All Time. The second, Hollywood Ending, was featured on the TODAY show’s Best Summer Reads of 2019 and was nominated for both Anthony and Lefty awards. Prior to writing novels, Kellye spent eight years working in Hollywood, including a stint writing for Cold Case. She currently serves on the Board of Directors for Sisters in Crime and is a co-founder of Crime Writers of Color. Learn more at KellyeGarrett.com. 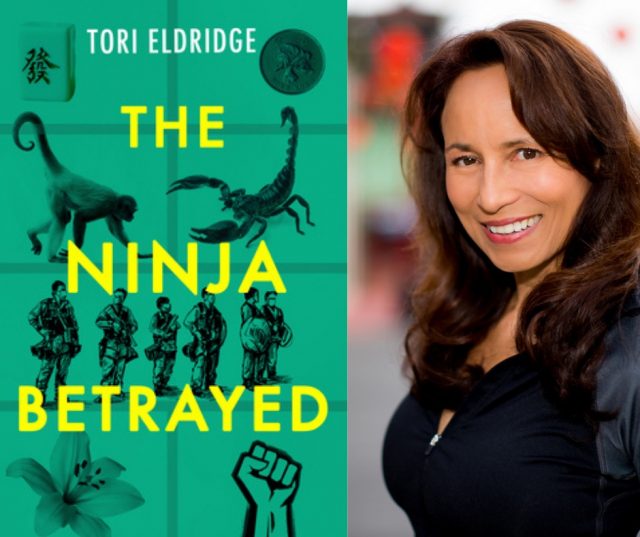 Lily Wong and I would be amazing friends! If we had a day together, we would begin with dim sum breakfast at her North Dakota Norwegian father’s authentic Hong Kong cuisine restaurant in Culver City, Los Angeles, followed by a heavenly Bird’s Nest Cheese Cream Osmanthus Oolong Tea with Gold Leaf from Lily’s favorite tea shop in Monterey Park. (She went there with her mother in The Ninja’s Blade. Trust me. It’s incredible.)

We would swing by Sensei’s home dojo in Los Feliz for insightful, and hopefully not too grueling, ninja training—I’m more than twice Lily’s age, after all! —a deep meditation, and quiet conversation with Sensei while gazing at his garden. After that, it would be off to Hong Kong for a family banquet with Ma, Gung-Gung, Po-Po, and the rest of Lily’s relatives. We might even cross paths with Lily’s new boyfriend, Daniel Kwok. (I’m stretching time here, but go with me, okay?)

Food, tea, ninja, and family. Yep. That would be my ideal day. Although, if I left it up to Lily, we’d be hip deep in triads, traffickers, and trouble.

Tori Eldridge is a national bestselling author, 2021 Crimson Scribe Award winner for the best book of the year, and Anthony, Lefty, and Macavity Awards finalist of the Lily Wong thrillers. Tori was born and raised in Hawaii, performed as an actor, singer, dancer on Broadway, television, and in film, and attained a fifth-degree black belt in To-Shin Do ninja martial arts. Tori introduces another empowered female protagonist May 24, 2022 in her dark Brazilian novel, DANCE AMONG THE FLAMES. 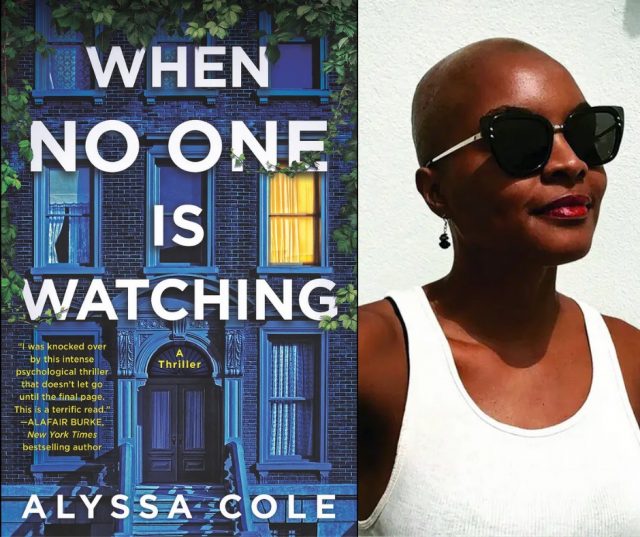 WHEN NO ONE IS WATCHING: ALYSSA COLE

I think I’d get along with Sydney, the main character of my thriller When No One Is Watching, though there’s a good chance she’d make an offhand remark that would hurt my feelings lol.

She’s a burnt out Black woman who loves history (which we have in common), so if  we had to spend the day together, I think we’d have a good time checking out a fun museum, then doing something relaxing like hanging out at a day spa, where we could unwind and talk about all the interesting things we’d seen at the museum and how they relate to modern life. 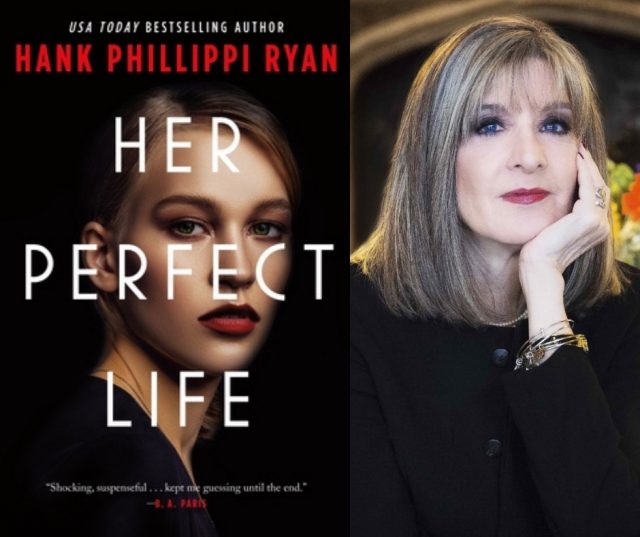 Would Lily Atwood and I get along?  That is the most difficult question I’ve ever been asked. And the reason it’s so provocative is that I have known some Lily Atwood types–driven, devoted, perfectionist television journalists who are also trapped by the intensity and pressure of the constant spotlight. And writing this book made me realize how much work colleagues don’t know about each other. And, most tantalizingly, how part of striving for perfection can involve intense psychological coverups. And, like single-mom Lily, the darkest of secrets.

So if we spent a day together (and I can actually kind of imagine that), it would begin with lattes, and tentative comparing of experiences, and then, depending, evolve into a more open-hearted conversation. Would we go on some great adventure? Would we get called away to breaking news?

Would we decide to collaborate on a fabulous story? Would we click, and become best friends—or would we be competitors? I’d love to meet the famous Lily Atwood, now that I know her secrets, and now that I know she’s a loving and compassionate person. But I wonder if I would have liked her before she revealed them to me.

Hank is also an award-winning investigative reporter at Boston’s WHDH-TV. In addition to 37 EMMYs and 14 Edward R. Murrow awards, Hank’s won dozens of other honors for her ground-breaking journalism. Hank is a founding teacher at Mystery Writers of America University and served as 2013 president of national Sisters in Crime. She blogs at Jungle Red Writers and Career Authors. She is a co-host at FIRST CHAPTER FUN and a founder and co-host of THE BACK ROOM, and the host of Crime Time on A Mighty Blaze. Learn more about Hank at www.HankPhillippiRyan.com. 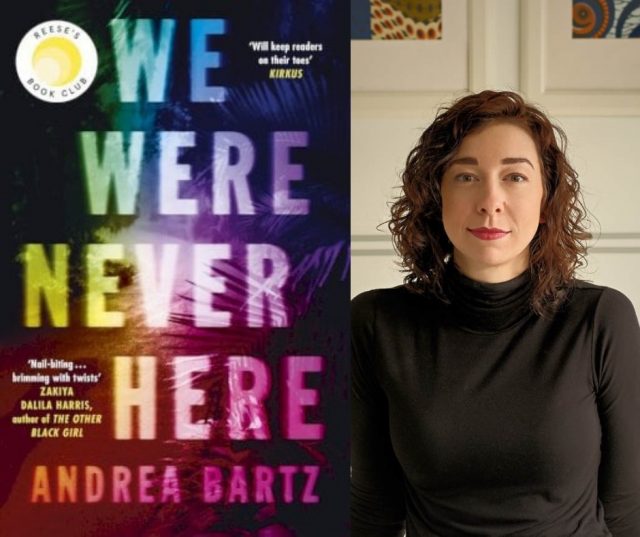 WE WERE NEVER HERE : ANDREA BARTZ

Emily and I would definitely get along! She’s funny and bright and fiercely loyal to her friends. She’s a bit more laid-back than I am (I’m a total Type-A friend), so I worry I’d kind of act like Kristen, the more decision-making (okay, controlling) friend.

Emily loves to travel, so whether we were on vacation somewhere or in her hometown of Milwaukee, I like to think we’d see the sights—maybe we’d go to Bradford Beach, Discovery World, and the Milwaukee Art Museum with lunch at the Milwaukee Public Market.

Neither of us is as risk-taking as her best friend, Kristen, so fingers crossed, we wouldn’t find ourselves in a blood-spattered situation like the two of them in WE WERE NEVER HERE.

Andrea Bartz is a Brooklyn-based writer and the author of THE LOST NIGHT, THE HERD, and WE WERE NEVER HERE, a Reese’s Book Club pick and instant New York Times bestseller. She’s also a journalist whose work has appeared in The Wall Street Journal, Marie Claire, Vogue, and many other outlets. 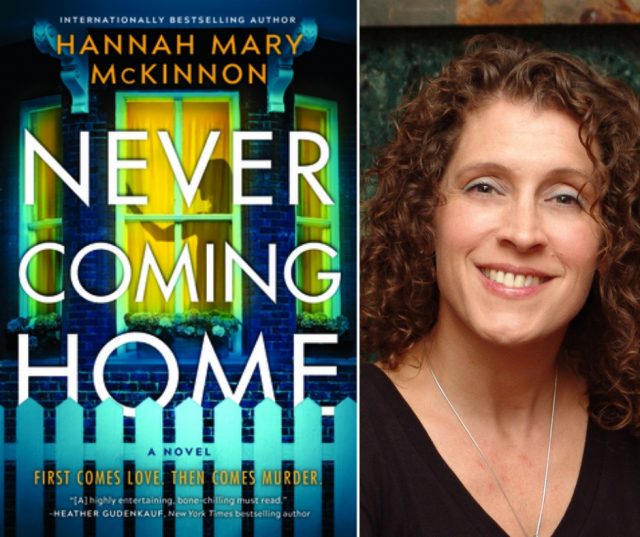 Will it sound bad if I say yes? After all, Lucas hired a hitman on the dark web to get rid of his exceedingly rich (and equally annoying) wife. In my defense, he’s charming, witty, and great company so if I didn’t know he was a psychopathic murderer, he’d be fun to hang out with.

As he wants to move his father to a care home in Switzerland, where I grew up, and he loves skiing, we could spend the day on the slopes in the Jungfrau region. Lucas works in IT recruitment, which I did too, so we’d compare notes over an alpine lunch. Then again, he might want to make me an apprentice in his nefarious deeds, so while I might want to spend the day with him, it’s probably best if I don’t.

Hannah Mary McKinnon was born in the UK, grew up in Switzerland and moved to Canada. Her suspense novels include THE NEIGHBORS, and bestsellers HER SECRET SON, SISTER DEAR, YOU WILL REMEMBER ME. Her sixth book is scheduled for spring 2022.

As readers, what aspects of a character keep you hooked to your book? Do you enjoy crime thrillers? If you’re a writer, would you like to tell us about a day spent with one of your characters? Which of the above books or authors have you read?