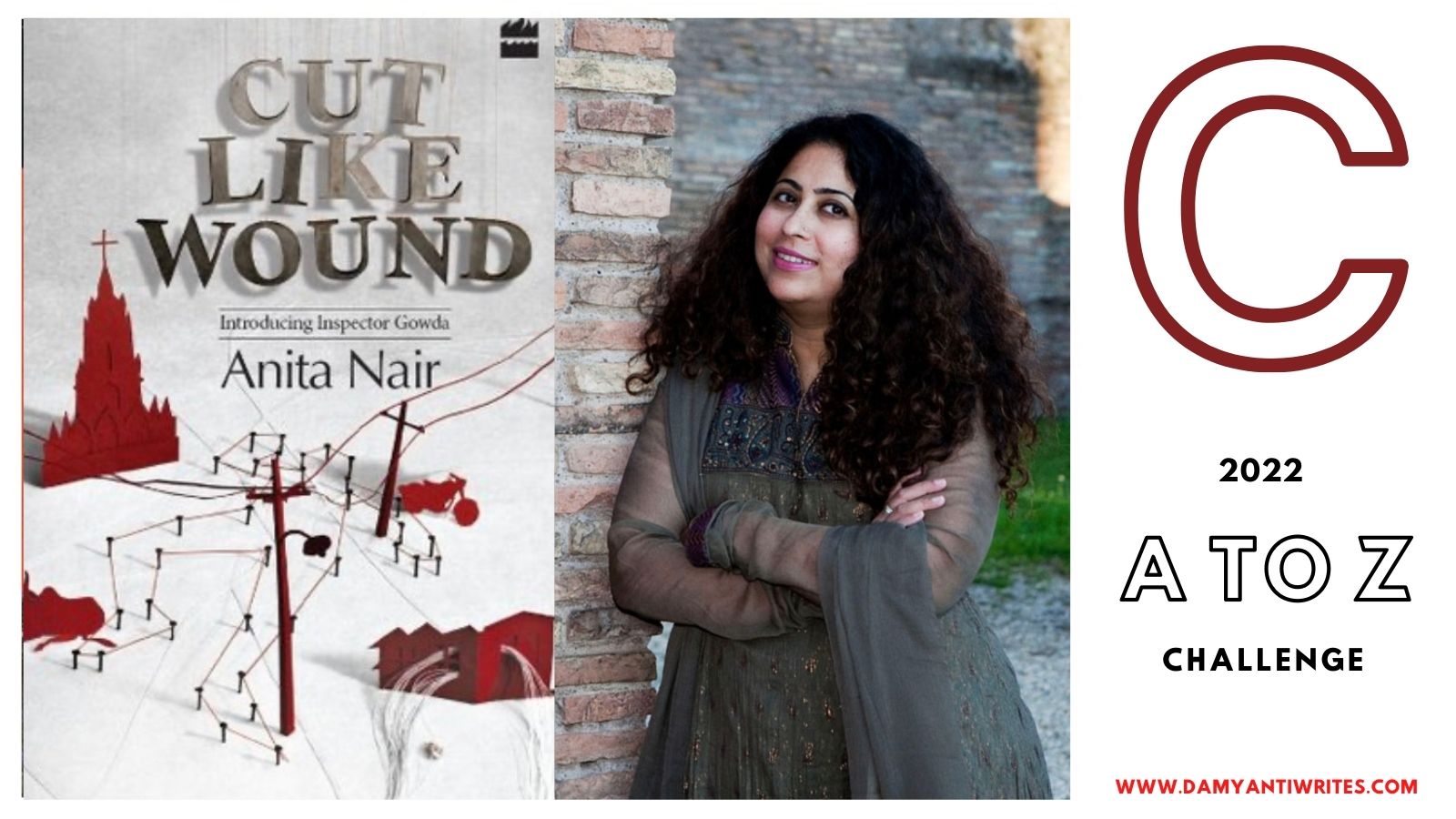 After Behind Closed Doors by B. A. Paris, for the letter C, I bring you Cut Like Wound by Anita Nair, a wonderfully atmospheric police procedural, the first in a series, set in Bangalore.

It is the first night of Ramadan. At Shivaji Nagar in the heart of Bangalore, a young male prostitute is killed and burnt alive. It would have stayed as yet another unsolved murder, but for Inspector Borei Gowda, the investigating officer. As bodies begin to pile up one after the other, and it becomes clear that a serial killer is on the prowl, Gowda recognizes a pattern in the killings which no one else does. Even as he negotiates serious mid-life blues, problems with his wife and son, an affair with an ex-girlfriend, and official apathy and ridicule, the killer moves in for the next victim…

Steeped in the lanes and atmosphere of the city of Bangalore, Cut Like Wound introduces to the reader a host of unforgettable characters unlike any in Indian fiction.

It wasn’t the ﬁrst time. But it always felt like the ﬁrst time as he stood in front of the mirror, uncertain, undecided, on the brink of something monumental. On the bare marble counter was a make-up kit. He ran his ﬁnger along the marble to check for dust. Only when he was satisﬁed that it was clean did he touch the quilted cover of the lid. The satin shirred under his ﬁngers. Something leapt in him, a wave of pure delight that was enough to set him off.

He switched on the series of light bulbs that circled the mirror. The electrician had stared when he had asked for the light bulbs to be placed so. The electrician’s assistant had sniggered and asked his boss, ‘Why does he want so many lights? Who does he think he is? Rajinikant? Is he going to put make-up on?’

But he had set his heart on it after seeing it in a ﬁlm. And so he had frowned and said in his coldest voice, ‘If you don’t know how to, I can always ﬁnd someone else.’ That had settled it.

In the mirror, he gazed at himself just once. Fleetingly. Then it was time. He opened the kit and started working quickly with a practised hand. The concealer to cover the shadows on his chin and around his mouth. The foundation, the ﬁne creamy talc to smoothen the complexion, eyes enhanced with the kohl pencil, and a twirl of the mascara brush on the eyelashes for the wide-eyed look. He wet the tip of his ﬁnger with Vaseline and traced his eyebrows. A pat of blush and then carefully he outlined his lips with a lip pencil and ﬁlled it with a deep pink lipstick. He pressed his lips together and applied a coat of gloss. Glistening lips smiled shyly at the reﬂection in the mirror.

About the author Anita Nair

Anita Nair is an Indian novelist  best known for her novels A Better Man, Mistress, and Lessons in Forgetting. She has also written poetry, essays, short stories, and novels in various genre.

Indian crime fiction has yet to find the popularity of crime novels set in other geographic locations. When I read Cut Like Wound for the first time, I was blown away by the wonderful characterization, the social commentary and the setting.

Inspector Gowda, the protagonist, is like many others–with marital problems, brilliant investigative skills but not much in the interpersonal department. I liked that the antagonist has a voice throughout, and that the novel is more than simple suspense–it uses crime as a scalpel to examine society: both positive and negative characters are fleshed out well enough that you come to care about what happens to them.

The serial killer’s back story is as much a part of the narrative as the efforts to catch them, and having been to some of the locations, it was a delight to be able to read the scenes set in various locales.

Cut Like Wound doesn’t have breakneck pace, but having been written by a very talented literary writer, more than makes up for it with its luscious descriptions and insightful observations of society. Pick it up if, like me, you read crime fiction to get to know more about a place and its people, and you’ll be rewarded with an excellent story. Definitely recommended.

Have you read the book, Cut Like Wound?  If yes, what did you think? What thrillers have you read lately ?