Want to Hear the Magical Tale of Two Puppies? #WATWB 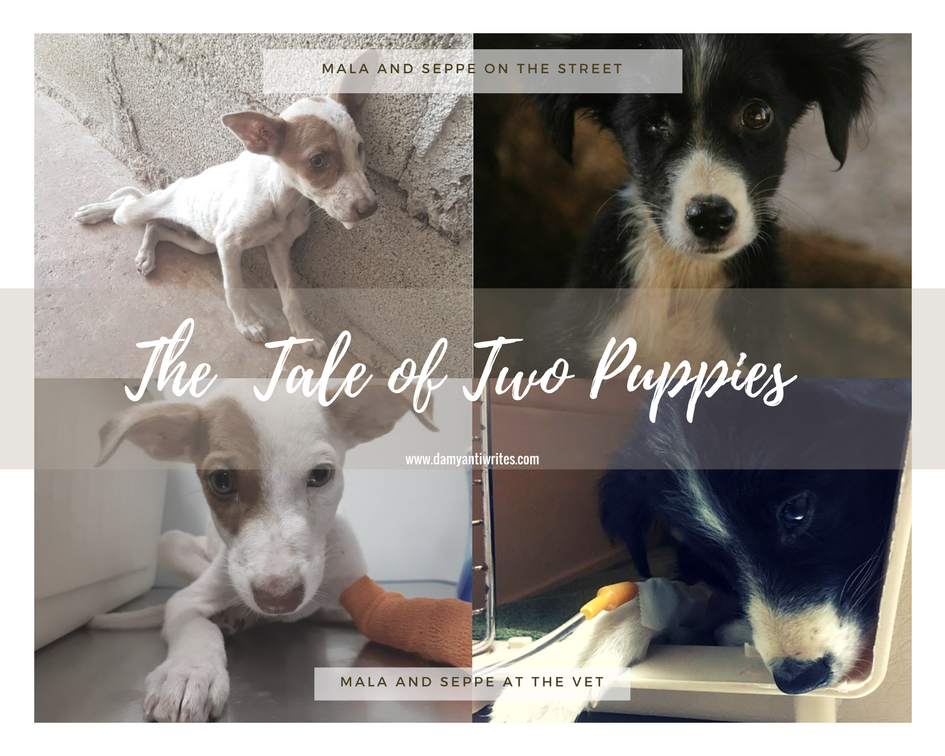 To spread peace and humanity on social media, a few of us have worked together to create the We are the World Blogfest. In a world where news and social media are awash with negativity, we aim to turn the focus on to small but significant stories that renew our faith in humanity.

We are the World Blogfest is here with its thirteenth edition.

The cohosts for the APRIL 2018 WATWB are: Shilpa Garg, Dan Antion, Simon Falk, Michelle Wallace , Mary Giese. Go visit them please and thank them for their hard work behind the scenes.
——- My friend Guilie Castillo is a passionate advocate for dog rescue, whose book It’s About the Dog has hit the stands recently.

For today’s We are the World blogfest, I want to share how Guilie and her friends have become the light in the darkness. Thank you so much for having me here, Damyanti—especially for the We Are the World ‘fest! In the spirit of spreading light and hope, I thought I’d share a dog rescue story of not just hope but Magic. Many of us at #WATWB are involved with projects to help others, whether it’s children or the elderly or animals or the environment.

The challenge is enormous and it’s all too easy to feel discouraged, depressed even. (In It’s About the Dog, aimed at people new to rescue, I even included a section on how to deal with the inevitable despair and dejection; it’s that prevalent.) So I’m sharing this with the hope you’ll find in it the encouragement to keep you making the world a better place, one action at a time.

Back at the beginning of April, a volunteer from Rescue Paws Curaçao (one of the island’s foremost rescue organizations) spotted an emaciated female dog wandering on a side street. She followed her into ever smaller and smaller streets, until the dog ducked under a fence and into a shabby, neglected yard. Other dogs were there, also emaciated, including some puppies that looked to be three or four weeks old. No sign of food, or even water. Two of the organization’s directors, Mirjan and Karin, armed with diplomatic smiles and more fluent Papiamentu (the island’s language) than the Dutch volunteer’s, came to talk to the property owner and see what they

could do for the dogs. The owner, an elderly preacher who they found out lived on barely 300 guilders a month (about USD 150), was welcoming enough, but seemed more interested in talking God than dogs. Eventually he agreed to let them put kibble out, which allowed them to get a closer look at the dogs.

The puppies they thought were around a month old, once they were brought to the vet, turned to be four months old. They were so scrawny, so malnourished even from the womb (judging by the shape their mom was in), that they weighed in at less than a third of the minimum recommended weight for their age. Their little bodies, tiny bones sticking out everywhere, felt as lithe as a bird’s. Their ‘owner’, the preacher, didn’t seem to understand he had to provide for the dogs; his reasoning, born not of cruelty but ignorance, was that God provided for the trees and nature in general, and dogs, being a part of nature, also fell into this ‘providence’. Rescue Paws explained, as gently—but effectively—as they could, that this was not the case and, due to the man’s limited income, they are now providing food and medicine to ensure the dogs’ wellbeing.

But two of the puppies—a black-and-white furry babe missing an eye, whom Karin named Seppe, and a white-and-brown lovely that Mirjan named Mala— weren’t eating, didn’t even want water. The day they found them out in the mondi, the wild brush around the house, lying as if dead, they decided more desperate measures would be needed to save these puppies.

The vet determined it wasn’t parvo, fortunately (parvovirus is a death sentence for dogs this young); most likely it was some kind of intestinal infection, but they were so weak, so underfed, and the infection so advanced and entrenched in their little bodies, that they’d need round-the-clock care. Literally 24/7.

Clearly far beyond what the preacher could provide, even if he had been willing.

All of which meant that they needed a foster.

Fosters, as anyone involved with rescue knows, do not grow on trees. A good foster—someone with experience (or with the willingness to learn), with the dedication to follow instructions, with enough flexibility in their schedule to fit in late nights and early mornings and emergency trips to the vet—is impossible to find.

But I promised you magic, and Magic delivered. The impossible foster was found: a wonderful woman who met all the requirements and added a few more just for kicks. She took Seppe, and Mirjan—despite already having a houseful of dogs—stayed with little Mala.

Every morning both women brought the puppies to the vet, to be hooked up to an IV for fluids (and antibiotics and vitamins), and stayed on it all day. At night, neither got much sleep, trying to give them water and broth on an eyedropper, trying to feed them bits of chicken and rice. They kept them clean and comfortable, looked after their every need, showering them with love; maybe, just maybe, that would give them a reason to fight, and live.

For Seppe, the improvement started within the week. Still weak, and far from out of the woods, but he was getting better. Mala, however, wasn’t. He still refused to eat more than a mouthful or two, wasn’t drinking nearly enough liquids, seemed tired and listless. Hope, small as it had been, was now dwindling down to nothing.

And then—yes, Magic. Maybe the meds finally kicked in. Maybe the bits of broth Mirjan managed to get into him finally added up into some nourishment. Maybe it was all that love surrounding him, as if he’d decided he couldn’t let down these people who’d become so invested in his recovery. So it came to pass that, one fine day, Mala began to wag his tail. And to walk. And to eat. And then, at last, to play.

Now that Mala is so much better, Mirjan brought him over for a visit with his brother Seppe last week, and the reunion was so extraordinary—they climbed all over each other, licking and play-barking and generally acting absolutely ecstatic to see each other—that the foster offered to take Mala in, too, so that the two brothers could walk—well, more like chase and race—the last steps of their recovery together.

Their story isn’t finished yet. Rescue Paws is trying to find them a forever family together. It’s incredibly difficult to find homes for rescue dogs, not just in Curaçao but anywhere, really, so it’s far-fetched, but… well, maybe there’s still a little bit of Magic left for these two. We hope so. After all, hope is what dog rescuers are made of.

(Would you like to help Rescue Paws save more dogs? Find out more about them on Facebook and at their website. You can donate via PayPal, too—every bit helps!)

Thank you so much, Damyanti, for giving space to little Mala and Seppe, and to everyone for visiting! I hope you found a bit of light in this story, and I look forward to chatting with you in the comments. Do you have dogs, or other animals at home yourself? Have you ever rescued a street dog? Do you think you could? Do you volunteer at any shelters or animal sanctuaries? Just for kicks, care to guess how many dogs Mirjan, the Rescue Paws director, lives with? Hint: it’s more than my eight.

If you’d like to take part in this blogfest, sign up in the WE ARE THE WORLD Blogfest Linky List below and please help spread the word on social media via the hashtag #WATWB.

The We are The World Blogfest Community Page on Facebook will continue to show links to the various blog posts. So you don’t have to hurry through. You can always enjoy one a day. Like the page and share your posts on the thread for the purpose. I’m going to pick up Guilie’s book today, and I hope you do, too. It is the perfect gift for the dog lover in your family, and for you, if you are interested in helping animals in dire straits. I’m also sending off a small donation to Rescue Paws, so more Malas and Seppes are given a second chance at life.

ABOUT GUILIE: A Mexican writer and dog rescuer who moved to Curaçao “for six months”—and, twelve years later, has yet to find a reason to leave. Her work has been published online and in print anthologies. THE MIRACLE OF SMALL THINGS is her first book. Find Guilie on Facebook and Twitter, at Quiet Laughter where she blogs about life and writing, and at Life in Dogs where she blogs about life and… well, dogs.