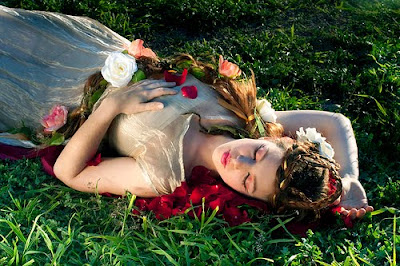 This is best described in the Emily’s words:

It was a little dense on the part of the Whites to name their daughter Lily, but they could not help it, it seemed quite a lark at the time. She was born after trying naturally for five years, artificially for another five, and they felt themselves justified in acting silly over her. Lily White grew, as girls do, from infant, to toddler, to a young woman.

The Whites were doting parents, at least Mr. White was. In the face of his daughter, he saw the blossoming of all his hopes and ambitions. He worked as the director of a Cosmetic Research Institute, and the drug he had given Mrs. White during her pregnancy inside her Folic acid capsules seemed to have worked as expected.

Lily grew more radiant everyday, and Mr. White took pictures of her each weekend, and if he managed to find an excuse, a few days of the week as well. Lily hated having her pictures taken, and hid from her father, who always found her out.

In the album he kept locked up in his study, he scribbled notes beside each picture, drawing arrows to various points in his daughter’s face. Documentation was everything for an experiment.

Mrs. White, on the other hand, was not so enthusiastic about her daughter. For one, her daughter did not smile or make faces. Babies differ, from one to the other, but Lily was absolutely different: her face remained frozen, no matter the provocation or pleasure. No trace of expression crossed it even when Mrs. White annoyed Lily by putting her toys just out of her reach, or put a sweet near Lily’s mouth only to pop it into her own at the very last second.

She pointed their daughter’s lack of facial expression out to her husband.

“We have a princess of a daughter, look how beautiful she is,” he replied, watching their daughter as she put her doll’s house in order.

He did not want Mrs. White upsetting his plans. In fact, she was part of the plan, and had been recruited into his experiment due to the genes that gave her exemplary bone structure and robust health. Good skin would not work if it did not hang on a suitable frame.

Years passed. Mrs. White faded and wrinkled in the aftermath of the various miscarriages preceding Lily’s birth, and the strain of bringing her up afterwards, while Lily bloomed fair and white like her name.

She reached her fifteenth year, and Mr. White watched his daughter with increasing excitement and trepidation. He would present her to the world on her sixteenth birthday, as a triumph of scientific research, because according to his calculations that would be the year she reached her acme, and stay there the rest of her life.

On her sixteenth birthday, Mr.White stole into his daughter’s room, to put her birthday gift next to her, a surprise. Mrs. White watched him tiptoe out of their bedroom, a slim wrapped package in his hand. In the years after Lily was born, all Mr. White’s gifts were for his daughter. Mrs. White had received none. Not for Christmas, nor her birthdays.

Mr. White came back from his daughter’s room, got ready, and went to office after polishing off the breakfast Mrs. White had prepared for him.

“See you at the party tonight,” he said to Mrs. White with a dry peck on her wrinkled cheek.

After her breakfast, Mrs. White began preparing for the party, festooned their home, baked the cake, waited for Mr. White’s Princess to come awake. When it was past mid-day, and Lily had not emerged from her room yet, Mrs. White walked upstairs to look for her daughter, and found her in bed, asleep.

She called and shook Lily, and prodded Lily, but to no effect. She checked her daughter’s pulse and breathing, and they were normal. But Lily couldn’t feel Mrs. White’s pinches, and from experience Mrs. White knew she found them painful. She had pinched her daughter often enough and brought her to tears– Lily shed tears, her eyes watering up, her face like a statue.

She ran downstairs and called Mr.White, to tell him his Princess had taken up a strange new way to upset her mother.

“I’ll come with a doctor rightaway,” said Mr. White, without asking any questions. He did not seem surprised.

“She will sleep, Mr. White, for a long time,” said the pale-faced specialist, and Mrs. White Heard them through the keyhole.

“This is Kleine-Levin Syndrome, whose victims worldwide may number no more than 1,000. The victims live normally for weeks or months at a time, with normal sleep patterns and normal energy levels. Then, with little warning, they’ll go to sleep for days or weeks at a time,” he pronounced in a monotone.

“No. The patients come out of it naturally in 12-15 years. Though in your daughter’s case, I detect a degree of muscular paralysis, which seems to be spreading. She may not be able to eat or expel waste, as other patients of this disease do. Maybe we should hospitalise her for observation.”

“Sure, doctor. But today is her birthday and it would break her mother’s heart if she were taken away. Maybe tomorrow?”

As he led the doctor out Mr. White began thinking of various solutions to the problem; the specialist would not be fooled for long. That his experiment to create ageless beauty had failed was clear, it was a marvel Lily had lasted as long as she had.

Mrs. White, who was wiping the glasses in a nearby shelf, had heard the entire conversation. A tiny smile played on her face. When Mr. White was out of the door, she began humming.

Lily White lay on her white sheets, her lips red as coral and her dark hair fanned about her face, sleeping, dreaming of a life without her parents.
—————————————