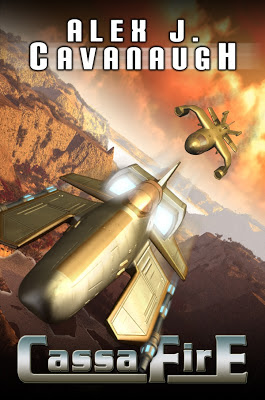 Every Wednesday from today onwards, I would feature a book by a fellow author here on Amlokiblogs.

I begin with Alex J. Cavanaugh, my co-host for the A to Z Challenge, and an author-hero in blogland,with his Amazon best-selling science fiction – space opera/adventure, Cassafire.

Part of a series, the Library Journal finds that Cassafire “delivers on the promise of its
predecessor, combining military action sequences and political intrigue with
strong, memorable characters.”  I’ve read the series, and I agree.

Elevator Pitch:
Byron
is content with life on the exploration vessel. When the ship investigates alien
ruins, he is saddled with training a talented, feisty female pilot. Add the
adoration of a young scientist, and a threat from space, and Byron feels invaded
on every level. All he wanted was his privacy…

Aware he needed to assist Athee with her
harness, Byron stepped away from the door. Unable to locate her, he frowned. The
other two passengers were secure in their seats and gave no indication as to her
whereabouts. Alarmed, Byron peered into the cockpit. Athee now sat in the
co-pilot’s seat, her harness in place and eyes scanning the control panel.
Concerned, he entered the cockpit. She looked up and smiled.
“Your controls still amaze me,” she said,
her eyes reflecting childish wonder. “So much information to
process.”
Hesitating, Byron grasped the back of her
seat. “You’ve been in a shuttle before?”
“Of course. The previous shuttle pilot
even gave me a ride over the valley.”
I bet he did! Byron thought, staring at
the attractive young woman. “Well, you need to go take a seat with the other
passengers.”
Athee tossed her hair aside and eyed him
expectantly. “I thought I’d ride in the cockpit with you.”
“That’s probably not a good
idea.”
“Why not?”
“That’s the co-pilot’s
seat.”
“Do you have a
co-pilot?”
“Well, no…”
“Then this seat is
open.”
Byron sighed in exasperation. Releasing
her seat, he ran his fingers through his hair. This woman is too stubborn for
her own good, he thought.

I urge you to go buy the entire series and tell me how you liked it in the comments!
—–
P.S.: Email me at atozstories at gmail dot com in case you want Your Book featured.