I’ve recently been reading more novels than short stories, but this anthology was a gift: Love, in Theory, by E.J. Levy.

From the book’s blurb: 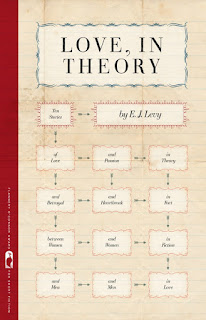 In ten captivating and tender stories, E.J. Levy takes readers through
the surprisingly erotic terrain of the intellect, offering a smart and
modern take on the age-old theme of love—whether between a man and
woman, a man and a man, a woman and a woman, or a mother and a
child—drawing readers into tales of passion, adultery, and heartbreak. A
disheartened English professor’s life changes when she goes rock
climbing and falls for an outdoorsman. A gay oncologist attending his
sister’s second wedding ponders dark matter in the universe and the ties
that bind us. Three psychiatric patients, each convinced that he is
Christ, give rise to a love affair in a small Minnesota town. A Brooklyn
woman is thrown out of an ashram for choosing earthly love over
enlightenment. A lesbian student of film learns theories of dramatic
action the hard way—by falling for a married male professor.
Incorporating theories from physics to film to philosophy, from Rational
Choice to Thorstein Veblen’s Theory of the Leisure Class, these stories
movingly explore the heart and mind—shooting cupid’s arrow towards a
target that may never be reached.

She felt the immensity of the spinning world beneath her, all its poignant possibility, and felt again the tremendous sense of promise she had known in her youth. Irrational, misplaced, the hope grew in her like the child she was carrying, and by the time Renee realized what was happening it was too late. Only later would she understand that her hope had been like her father’s erstwhile faith in the Party, like her mother’s belief in the man she’d married: fragile and fallible and misplaced.

What books have you been reading lately? Would you pick up a collection of short stories with a fairly literary, even academic bent?