The Singapore Literary Festival is here.

I was thrilled to have my books signed today by Michael Cunningham (one of my writing heroes) and Jeet Thayil (this year’s much-touted surprise Booker shortlister, for Narcopolis)! 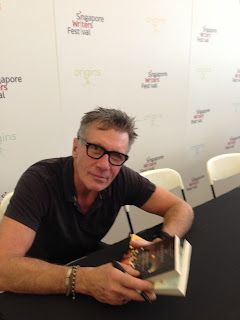 Felt sorry for Michael when the lady at the queue in front of me asked him, pointing at ‘The Hours‘ which he was signing for her, “So did you write this all at once, or did it take more sittings?”

I burst a nerve or artery somewhere, but Michael smiled, informed her that it varied, really, some pages took more time than others. After which I didn’t have the heart to ask him another question.

He was kind and smiling though, valiantly fighting jet-lag, trying to get my long Indian name right. No wonder I saw him lighting up one cigarette after the other once the book signing was over. 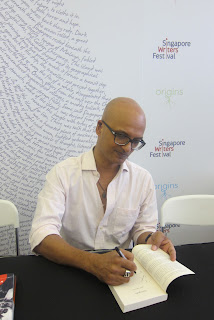 Jeet Thayil lives in New Delhi and hates it, said so right after he signed my book, and that made me like him already. I lived in the city for 10 years, never developed any special affection for it.

He has one of the most elaborate signatures I’ve seen from any author (and I’ve seen a fair number). I’m wondering what happens at book signings where the queue is somewhat longer than here.

He was on one of the discussion panels, and seemed to have a dry humor and a sort of forthrightness I like in a writer.
———- 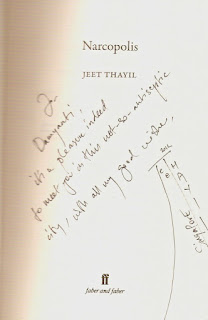 Overall, a good day with discussion panels on various topics, and even a book-swapping do.

Why are the writing workshops so few, and of such basic levels? The talk I went to this morning made me sigh. The writer, though very qualified, had obviously not been given an audience profile, and served up a very general hour of writing advice with emphasis on re-writing, carrying an idea journal and so on.

Why is it impossible to get good writing teachers, give them a specific, strong brief, for proper day-long workshops for a dozen people at a time in a country that obviously needs it and has the resources to pay for it and then some?

Singapore puzzles me at times.