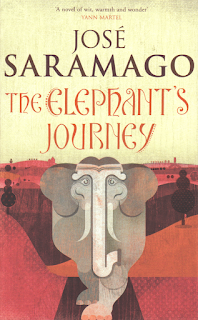 I picked up The Elephant’s Journey by José Saramago last month, and picked it up last night to read.

Strange though it may seem to anyone unaware of the importance of the marital bed in the efficient workings of public administration, regardless of whether that bed has been blessed by church or state or no one at all, the first step of an elephant’s extraordinary journey to austria, which we propose to describe hereafter, took place in the royal apartments of the portuguese court, more or less at bedtime.

Diving into the book was somewhat like visiting a city without any street signs or any sort of signs at all, because Saramago uses long sentences, very little punctuation, no inverted commas or even spaces for dialogues, no paragraphs either, just page after of page of dense writing.
My inner editor/proofreader wanted to shorten the sentences, use capitalizations for proper nouns and so on. Can’t do that to a Nobel laureate, so I decided to just give it a go, no judgements. *sarcastic grin*
Once I learned to let go however, Saramago’s writing became like a river, carrying me forward with utter disregard for any convention. The story of the elephant’s journey has me hooked, and I’m not only floored by the narrator’s wit, but also happy that the Elephant’s mahout is an Indian, and a very intelligent Indian at that 🙂
Ursula K Le Guin has an excellent review of the book in the Guardian, and I’ll steal her summary here:

History attests that in 1551, an elephant made the journey from Lisbon to Vienna, escorted first by officers of King João III of Portugal, then by officers of the Archduke Maximilian of Austria. Solomon the elephant and his mahout had already made a long sea voyage from Goa and spent a couple of years standing about in a pen in Lisbon, before setting off for Valladolid as a present from the king to the archduke, who travelled with him to Italy by ship and across the Alps to Vienna. In the novel, Solomon and his mahout Subhro (whom the archduke renames, with true Habsburg infelicity, Fritz) proceed through various landscapes at an unhurried pace, attended by various functionaries and military men, and meeting along the way with villagers and townsfolk who variously interpret the sudden enigma of an elephant entering their lives. And that’s the story.

This book needs some getting into, but once you’ve made friends with its structure and style, it is all that you wish a novel to be: thought-provoking, sensitive, witty, humorous, enriching, and oddly enough, entertaining. Wish I could read it in Portuguese, because I can imagine the cadences of the language and feel that it must be more musical in the original.
Read Le Guin’s review, and if it peaks your interest, get your hands on this book. After an initial hurdle, you’ll enjoy yourself, I promise!