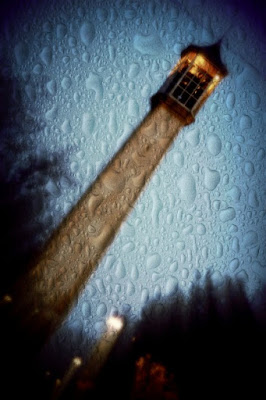 Today’s story starter (in bold at the beginning of the story below) comes from Boysmum2 and the picture prompt is another, my favorite, snapshot by Joseph. W Richardson.
——–

Perched up high in a church bell tower waiting for the rain to pass, he cowered as he watched things fall apart. Would he be spared to later tell the tale of the times when the earth quaked, the wind sang, when outside there was a storm, as much in his heart inside?
His eyes fogged with tears, he curled himself in a corner of the conjuratory, a preacher who’d forgotten his prayers against the rain. The bell rang through his body, sending ripples through his being, incessant, like the howling of the wind through the broken glass panes.
As afternoon became evening and evening rolled into night, he clung on, trying to remember the holy words he had learned for years at the seminary, but none came. The bell tolled through him, till he and the bell became one. It purged him of all thought, and only the breath and the vibration remained through the night, wordless, but no longer agonized.
They found him in the morning lying in a silent heap under a quiescent bell.
Your prayers saved us from the worst of it Father. A few were hurt, but none died, they said as they lifted him on their shoulders and down the dark stairs and into the sunlit church courtyard.
He opened his eyes and looked at them, You were the saved by the bell, my children, he said, and fell quiet, listening to the tolling of the bell within.
Those were his last words. Another took his mantle in the church, because from that day onwards till the hour he died, the good preacher never uttered a word again. 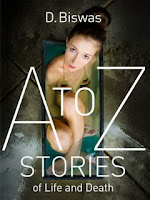 As a co-host, I end with A to Z Challenge  reminders:
1. Turn off your word verification. It helps no one. You may moderate comments for a while if you’re unsure.