Dear Writer, Are You a Good Scavenger? #WritingLife 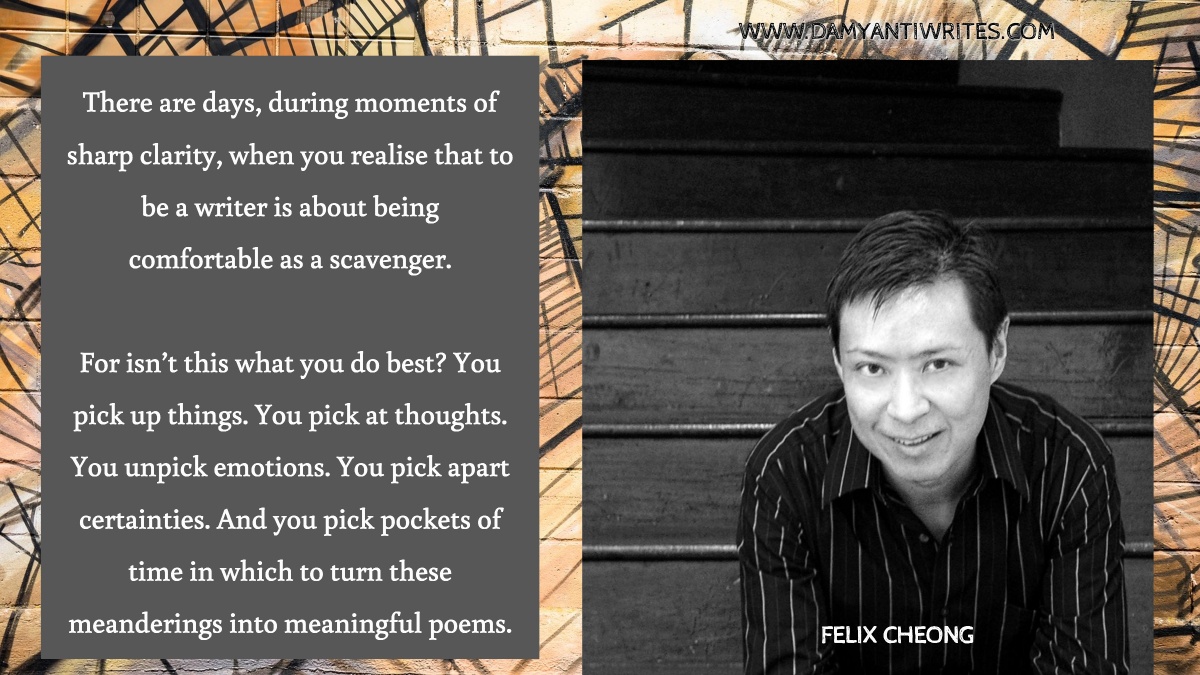 Here on Daily (w)rite, as part of the guest post series, it is my pleasure today to welcome one of the luminaries of the  Singapore literary scene, Felix Cheong, He writes about his process of writing poems. Personally I think his advice holds for storytelling as well.

Feel free to ask questions after you’ve read his post. To two of the commenters chosen by Felix, I’ll be giving away signed copies of his poetry collection B-Sides and Backslides: 1986-2018 !

Waste not, want not. Want not, write not. Write not, waste not.

There are days, during moments of sharp clarity, when you realise that to be a writer is about being comfortable as a scavenger.

For isn’t this what you do best? You pick up things. You pick at thoughts. You unpick emotions. You pick apart certainties. And you pick pockets of time in which to turn these meanderings into meaningful poems.

And you don’t stop – you can’t and you shouldn’t – because you wear this habit like a second skin. This is you, as you’ve always known yourself, living hand-to-paper in what Yeats calls “the foul rag and bone shop of the heart”. 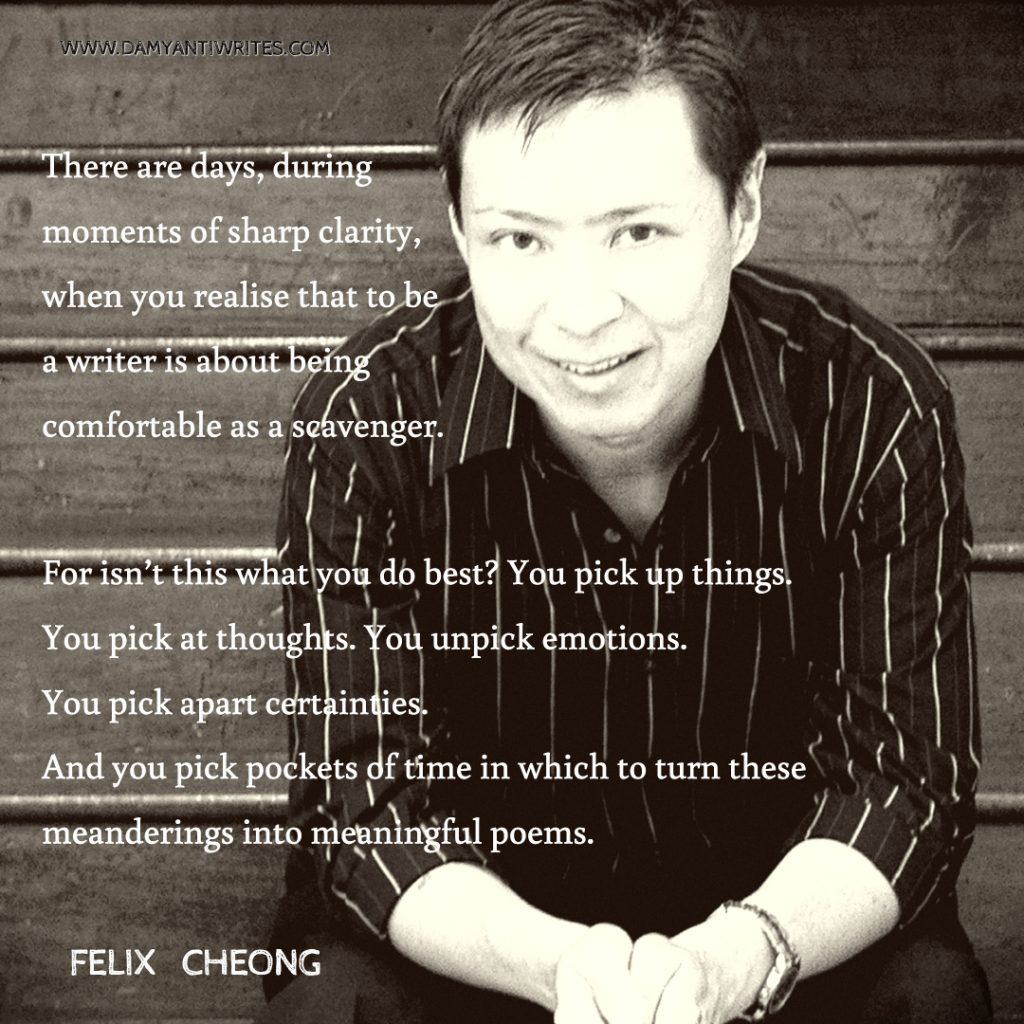 This is why your journal is always within an itch reach. The medium may have changed – a notepad on your phone or a random post on Facebook – but you’re always observing, recording, putting your mind to the business of not minding your own business.

Conversations overheard and snatched. Tying down the balloons of scattered thoughts. Finding a wry insight into an unusual sight. Turning over an image for a pun. Decoupling couplets. Allowing a rhythm to run rings round your head.

They’re the poetic equivalent of doodling, writing exercises you do to limber up.

Recognise that this is your creativity at its most listless. It wants to play, it needs to roam, time and place be damned. 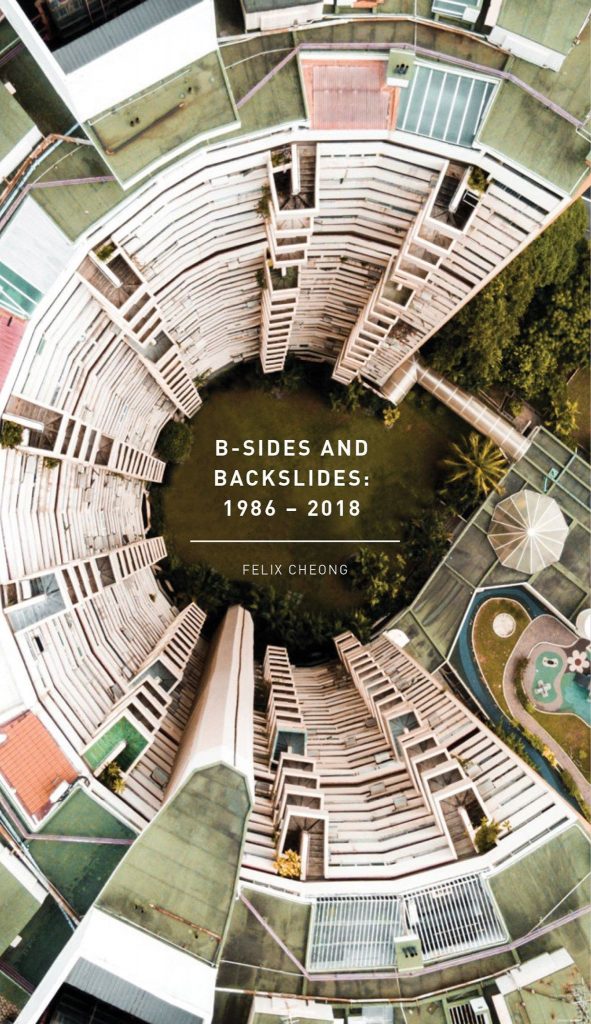 But don’t think ill or small of these bits and pieces. They may be unpolished, incomplete or imperfect (usually a combination of all three) but it doesn’t mean they are done for or you’re done with them.

Given the right time, they could be salvaged, given a makeover and presented as shiny and new.

This was how my fifth collection of poetry, B-Sides and Backslides: 1986-2018 (Math Paper Press) came about.

Published in August, it comprises what I call B-sides, outtakes from previous collections and previously unpublished material.

In a nutshell: a retrospective that provides a helicopter perspective of my poetic output over 32 years.

It’s also something of an unexpected child, one which had come about by accident (I’m very Catholic about birth control).

Looking through my thick folder of discarded poems for drafts to show my creative writing students earlier this year, I came across many scribbles that were my ticket to ride across decades, from the 1980s to the 2010s.

It helps that I’m a diligent hoarder, and not ashamed to admit it. I keep all hardcopy drafts the same way some people keep albums of fading Polaroids and photographs.

As I dusted off these pieces, some of which I have not re-read in over 20 years, they began to develop into sepia snapshots of me as I was, a faraway sentiment that has long settled into sediment somewhere in my mind.

For instance, a few love poems, written circa 1996, remind me why an infatuation is aptly also called a crush, especially when it’s not reciprocated.

A couple of one-sided arguments with God, written circa 1998, reveal a confused writer, at the doorstep of middle age, still figuring out his place in the grand scheme of His plan.

A handful of poems, written between 1990 and 1999, testify to the albatross that reading Eliot’s “The Love Song of J Alfred Prufrock” as an undergrad had hung on my writing. In various voices and versions, I noticed how these poems have tried to rewrite Eliot’s masterpiece. 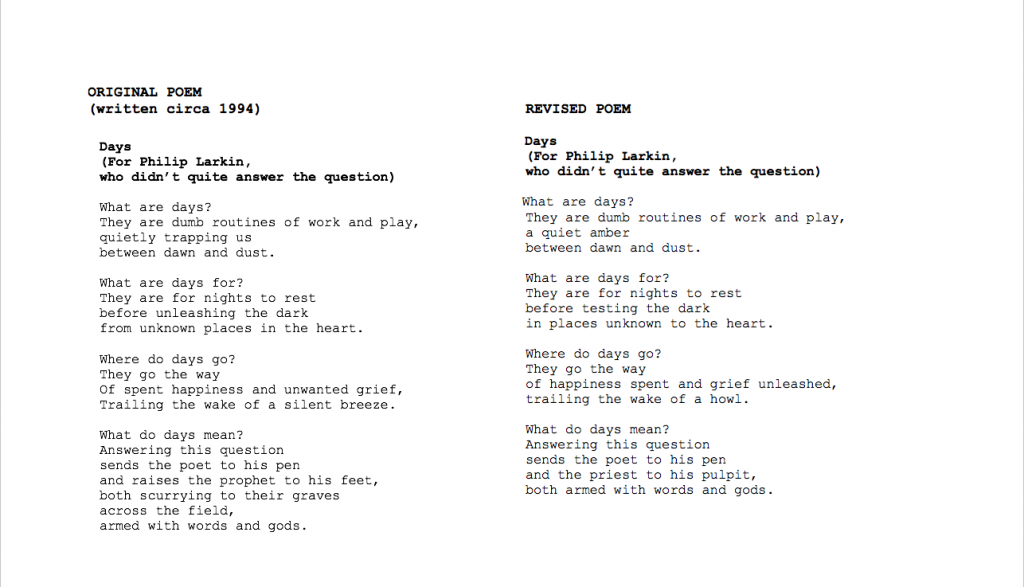 Many of these poems, I soon rediscovered, reveal an apprentice learning the ropes, trying out the nuts and bolts of his craft.

Experiments with wordplay and puns; the way to do line-breaks and let run-on lines free; the restriction of form and the friction in formlessness; keeping rhythm running like a tap while keeping rhyme in check.

Some of them were underwritten while others were insufferably overwritten. I noted, with a smile, how the 30something me had even graded each piece out of 10 (I’m very Singaporean in that way) to see if they could make the final cut for my collections.

But now, with hindsight and just the right amount of invasive surgery, I could give them new life, correct faults that inexperience had once opened up, and make them stand up to be counted. It was as if I could finally mine what I didn’t know was mine to begin with.

At the same time, I could also chart in these poems the stages of my growth as a writer and how my insights have shifted their centre of gravity over the years. It was a valuable exercise in perspective, like being handed a periscope so you could see out of the depths of your own writing.

So, to cut a short story shorter: It pays to keep drafts, even if they never see the light of day beyond a sliver of sun in your drawer. For these drafts are letters that you write today for the future you.

Dear Writer, are you a good scavenger? Do you chart your growth as a writer or poet over the years? Do you have questions for Felix Cheong? (To two of the commenters chosen by Felix, I’ll be giving away signed copies of his poetry collection B-Sides and Backslides: 1986-2018 !)

Felix Cheong is the author of 15 books, including five volumes of poetry, two young adult novels, a trilogy of flash fiction and three children’s picture books. His works have been nominated for the prestigious Frank O’Connor Award and the Singapore Literature Prize.

Conferred the Young Artist of the Year for Literature in 2000 by the National Arts Council, he was named by Readers Digest as the 29th Most Trusted Singaporean in 2010. Cheong has been invited to read at writers’ festivals all over the world: Edinburgh, West Cork, Austin, Sydney, Brisbane, Christchurch, Kuala Lumpur, Ubud and Hong Kong.

Over the past two years, Cheong has been deeply involved in collaborations with musicians. As part of the art collective Osmosis (together with Mervyn Wong and Natalie Ng), he has performed at the Lit Up Festival, Singapore Writers Festival and Textures Festival. He has also formed another group, Pathfinder, with musician-and-DJ Jasmin Patel and opera singer Michelle Tan. Together, they have performed at Books Actually and the READ Festival.

Cheong, who holds a master’s in creative writing from the University of Queensland, is currently an adjunct lecturer with Murdoch University, University of Newcastle and LASALLE College of the Arts.

the last Friday of each month snippets of positive news that shows our essential, beautiful humanity.

This monthly event has brought smiles on the faces of a lot of participants and their audiences, and somewhat restored their faith in humanity. Here’s a sampler. Click here to know more.

Sign up here and add your bit of cheer to the world for the next installment on the 26th July.