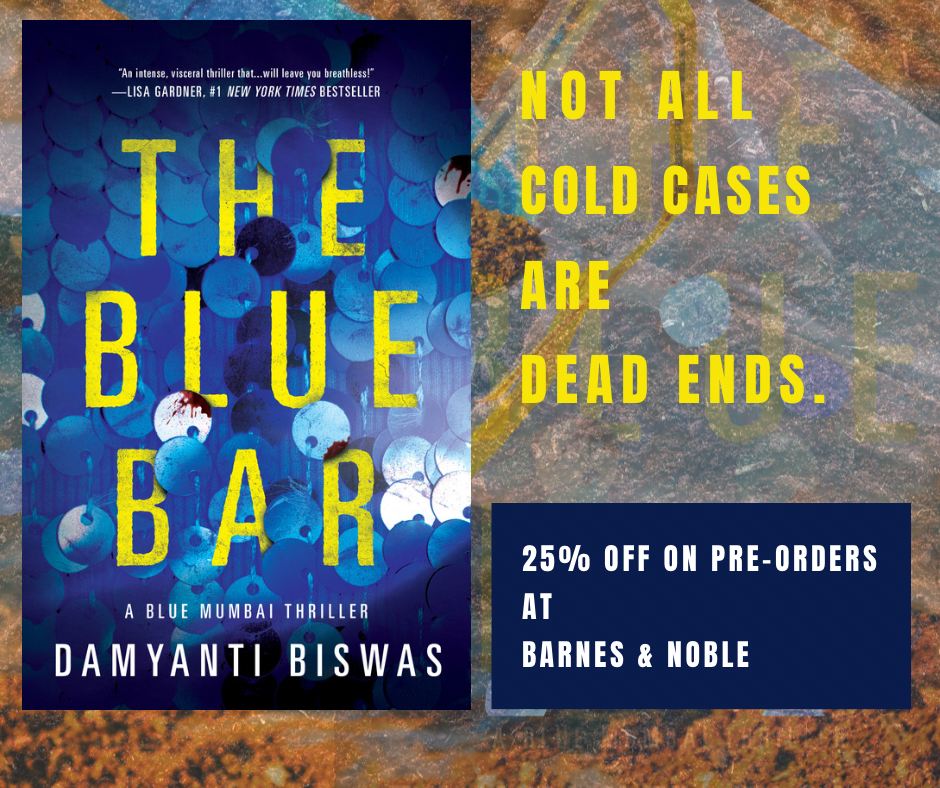 Dead is dead. I write tales of death and violence in my novels, with a sprinkling of hope (and as it happens, a bit of Bollywood and sequins in this latest offering).
THE BLUE BAR has been a long time coming–I began writing it in 2019,  then got busy promoting YOU BENEATH YOUR SKIN, and then the world as we knew it came to an end.
The world perhaps looks the same but it has changed in a million discernible and not so discernible ways. Even amid this chaos, this has been a long-time dream come true–to have a book edited by an editor I trust, have an agent I adore, and a book out in the biggest publishing industry in the world.
Can’t ask friends to ‘buy my book’ but if you were going to pick it up anyway, consider pre-ordering it. It shows the publisher this is a book worth punting on, and that often makes or breaks a book.
If you’re in the UK or US or Australia, a FREE and QUICK way to offer support is to request it at your library–most allow you to do it online, and the form takes 2 minutes to fill. Library requests really help a book find its feet, especially for a US debut bipoc like me.
It can be done online for most libraries. All you have to do is google your library name and the phrase, ‘Suggest a Title’, together.
They’ll ask for the book details, which I’m pasting below in a handy list :
Title: THE BLUE BAR
Author: DAMYANTI BISWAS
ISBN: ‎ 1662503911
Publisher: Thomas & Mercer
Date of publication: 1 January, 2023
Formats: Paperback, eBook, audio
The pre-order campaign has fab gifts, 8 books by bestselling authors :

Hank Philippi Ryan: The First to Lie
What happens when an undercover reporter gets in too deep? And when a practiced liar has to face off with her own truth—how does she choose her true reality?
Who will be the first to lie?

Lisa Gardner: Before She Disappeared
Frankie Elkin is an average middle-aged woman, a recovering alcoholic with more regrets than belongings. But she spends her life doing what no one else will–searching for missing people the world has stopped looking for. A new case brings her to Mattapan, a Boston neighborhood with a rough reputation.
Resistance from the Boston PD and the victim’s wary family tells Frankie she’s on her own–and she soon learns she’s asking questions someone doesn’t want answered.

David Corbett: The Long-Lost Love Letters of Doc Holliday
Lisa Balamaro is an ambitious arts lawyer with a secret crush on her most intriguing client: former rodeo rider and reformed art forger, Tuck Mercer.
In his newfound role as an expert in Old West artifacts, Tuck gains possession of the supposedly destroyed correspondence between Doc Holliday and his cousin and childhood sweetheart, Mattie—who would become Sister Mary Melanie of the Sisters of Mercy.

Rob Samborn: The Prisoner of Paradise
Though Julia worries her husband suffers from a delusion, Nick is adamant the voice belongs to a woman from the 16th century—his soul mate from a previous life. He discovers a religious order that has developed a method of extracting people’s souls, which they imprison in Paradise. As infatuation with the past clouds his commitment to his present-day wife, Nick must right an age-old wrong—destroy the painting and liberate his soul mate. But freeing her would allow all the souls to be reborn.
The order will never let that happen.

Yasmin Angoe: Her Name is Knight
A clandestine international organization dedicated to the protection and advancement of the peoples and countries of Africa around the world. Her Name Is Knight is a propulsive character story and action thriller driven by retribution, passion, strength — and coming to terms with your own true self, regardless of what anyone calls you.

Jaime Lynn Hendricks: Finding Tessa
When Jace Montgomery comes home late from entertaining clients, he discovers that his wife Tessa is missing. There’s broken glass at the back door. Clumps of her hair. Blood. Jace maintains his innocence despite the mounting evidence against him, but when a coworker he’s accused of having an affair with also disappears and a search warrant turns up an illegal gun in Jace’s home, all signs point to him as the culprit. What is he really hiding?

Jess Lourey: Unspeakable Things
Inspired by a terrifying true story from the author’s hometown, a heart-pounding novel of suspense about a small Minnesota community where nothing is as quiet—or as safe—as it seems.One by one, local boys go missing. One by one, they return changed—violent, moody, and withdrawn. What happened to them becomes the stuff of shocking rumors. The accusations of who’s responsible grow just as wild, and dangerous town secrets start to surface.

Kristin Wright: The Darkest Flower
You’ll never believe the terrible things being said about the perfect president of the PTA.
Attempted murder? Inexplicable accident? Either way, a PTA mom struggled for her life in an elementary school cafeteria, poisoned by wolfsbane. Now all eyes are on the accused, the victim, and a woman hired to look deeper.
TO ENTER THE PRE-ORDER CAMPAIGN:
1. You can pre-order copies (with bookplates) at the following stores:
Webster Bookstore & Café
Murder by the Book
2. You can pre-order copies (without bookplates) at other outlets.
3. You can request THE BLUE BAR at the library, as above.
4. Then fill up this form (takes 2 minutes).
In the meanwhile, here’s the video trailer of THE BLUE BAR below. Wish me luck. Shit is beginning to get real.
Have you entered pre-order campaigns before? Have you already read an advance copy of THE BLUE BAR? Do you buy your books from Indie stores or the bigger outlets?

If you liked this post, you can receive posts in your inbox, or keep updated on my writing by clicking on any or all of the following buttons: