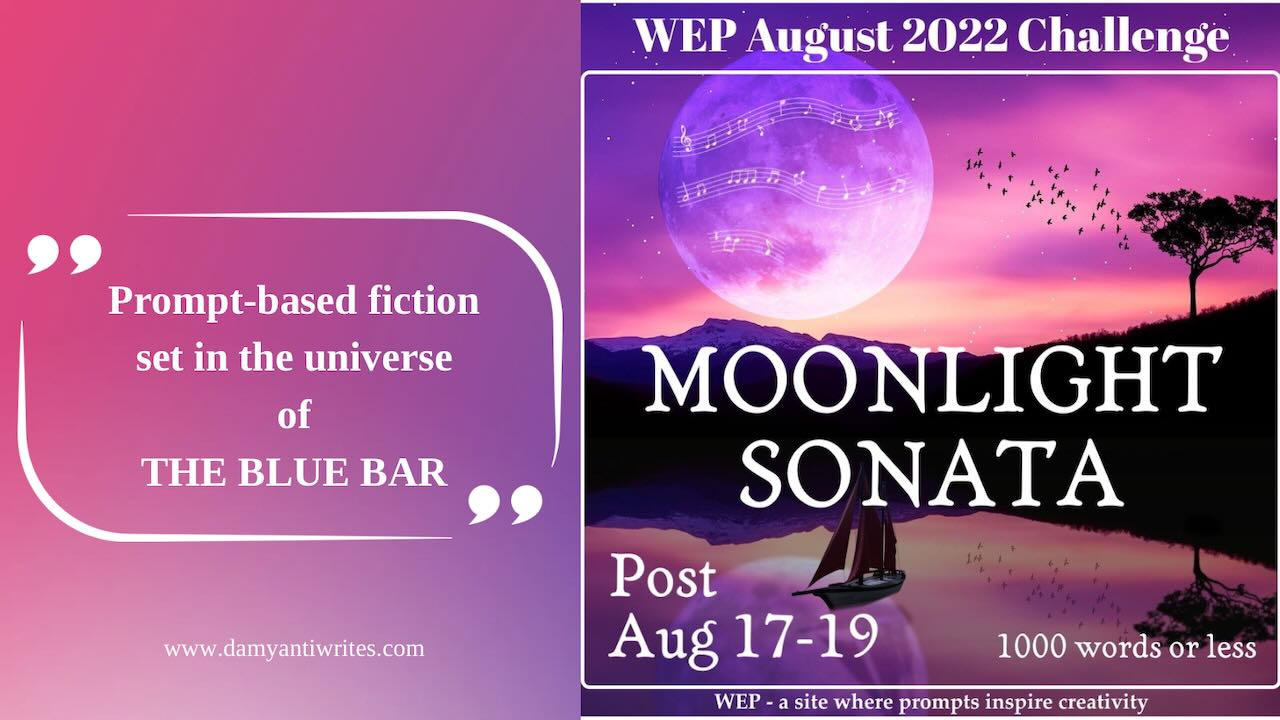 This edition of WEP Writing Challenge is a prompt fiction based on the song “Moonlight Sonata.”

As usual, I’ve used characters from my upcoming literary thriller, The Blue Bar. These snippets of prompt-fiction show aspects of the story only hinted at in the novel. When you read the book, you’ll recognize the characters, and the voices will (hopefully)  blend into the tapestry of the book.

——–So here’s my WEP entry, a prompt fiction flash piece I’ll feature only here on this site.—-

Numb with the molasses-slow hours at the police station, watching rain drip down the window glass that had not seen a cleaning rag in years, Nandini leaned back in her chair, sipping the glass of tea yet another constable had put before her. Her interviewee, an Inspector new to his post, was missing two hours after she was supposed to speak to him.

He will be here madam, the old constable had said, Arnav is never this late to a meeting. Not without good reason. Not unless someone is dying. Or at a hospital.

Nandini scribbled a note in her diary. Fascinating. An elderly constable who called Arnav Singh Rajput not by his title, as expected, nor the surname, which was not proper bur forgivable, but by his given name. Arnav. Ocean. Nandini looked up her earlier notes on the man. He used to be a constable. Rather unusual, such a rise in Mumbai police. Most constables stayed constables.

The scurrying made her laugh. Then smother her laughter. Nandini sat tight-lipped, as elderly constables dashed like truant schoolboys to their desks. Phones smothered, clicked off.

Tall, his mustache a shadow over his bow-shaped upper lip. Eyebrows curved, but lashed in a frown. As if to say, go on, out of my way. Expecting the path to clear. And finally, in a soft, polite voice in contrast to all that fear and scattering. Sorry, forgive me. Thank you for waiting. I’m Arnav. Inspector Arnav Singh Rajput.

Nandini sighs. Three months since that first day at the station. Arnav lay next to her. Sated. Asleep. How could this much time have passed and her none the wiser?

He stirs in slumber. Flings an arm about her middle. Soft snores. Such a large man, so unguarded in repose. She’s not given to giggles or she would have burst into one right now, her heart so filled with joy, with his pleas, his urgent, harsh whispers, their staccato breath, the rising movements, the sighs, firm hands on her bare thighs, his hair mussed under her fingers, light and hard in alternates like strokes on piano keys, and then the crash and fall. The floating away. Hushed calm.

Just as Nandini’s eyelids flutter close, letting the sweet darkness of sleep take her, he jerks away, terror in his voice. Thrashing. Forearm over her throat, hands grasping the sheets. Don’t go. Ta-ra. Ta’-ra.  Ta-ra’! Those two syllables like discordant final notes in a concert, plummeting into silence. A different one this time. Crushing, like the weight of his leg on her thigh, the arm on her throat now choking her.

Nandini shoves him off, but snatches him back when he’s about to topple off her bed.

The ocean. True to his name, he’s drawn to the skies. Not the moon, but stars. One in particular–the name itself a star. Nandini shushes him, cuddles him, her pillow damp with tears. He continues to mumble. Tara. Tara. Tara.

Do you read or write prompt-based fiction? Have you ever participated in the WEP? What do you think of Nandini, Arnav and Tara? Would you like to read their story?