Such a Quiet Place by Megan Miranda: #AToZChallenge #BookRecommendations

As we race to the end of the A to Z Blogging Challenge (how are we at S already?), I’m still writing about thrillers of all stripes, mysteries, and crime novels for 26 days in April, based on the letters of the alphabet. All posts linked here.

After Rock Paper Scissors By Alice Feeney, I bring you Such a Quiet Place by Megan Miranda.

Such a Quiet Place by Megan Miranda : Book Description

Hollow’s Edge used to be a quiet place. A private and idyllic neighborhood where neighbors dropped in on neighbors, celebrated graduation and holiday parties together, and looked out for one another. But then came the murder of Brandon and Fiona Truett. A year and a half later, Hollow’s Edge is simmering. The residents are trapped, unable to sell their homes, confronted daily by the empty Truett house, and suffocated by their trial testimonies that implicated one of their own. Ruby Fletcher. And now, Ruby’s back.

With her conviction overturned, Ruby waltzes right back to Hollow’s Edge, and into the home she once shared with Harper Nash. Harper, five years older, has always treated Ruby like a wayward younger sister. But now she’s terrified. What possible good could come of Ruby returning to the scene of the crime? And how can she possibly turn her away, when she knows Ruby has nowhere to go?

Within days, suspicion spreads like a virus across Hollow’s Edge. It’s increasingly clear that not everyone told the truth about the night of the Truett’s murders. And when Harper begins receiving threatening notes, she realizes she has to uncover the truth before someone else becomes the killer’s next victim.

Such a Quiet Place by Megan Miranda : Excerpt

I held my breath, held myself very still, listening closer. A shuffling in the hallway, like something was sliding along the wall. I spun from the kitchen counter, knife still in my hand, blade haphazardly pointed outward—

And there she was, in the entrance of my kitchen: Ruby Fletcher.

She was the one who said, “Surprise!” Who laughed as the knife fell from my grip, a glinting thing between us on the tiled floor, who delighted at my stunned expression. As if we didn’t all have cause to be on edge. As if we didn’t each fear someone sneaking into our home.

As if she didn’t know better.

Her smile stretched wider. “Harper,” she answered, all drawn out. The first thing I noticed were the low-heeled shoes dangling from her hand, like she really had been trying to sneak up on me.

The second thing I noticed was that she seemed to be wearing the same clothes she’d had on yesterday during the news conference—black pants and white sleeveless blouse, without a jacket now, and with the top button undone. Her dark blond hair was styled as it had been on TV but appeared flatter today. And it was shorter since I’d last seen her in person—just to her shoulders. Makeup smudges under her eyes, a glow to her cheeks, ears slightly pink from the heat.

It occurred to me she’d been out for twenty-four hours and hadn’t yet changed clothes.

There was luggage behind her in the hall—what I must’ve heard scraping against the beige walls—a brown leather duffel and a messenger-style briefcase that matched. With the suit, it was easy to imagine she was on her way to work.

“Where’ve you been?” I asked as she set her shoes down. Of all the things I could’ve said. But trying to account for Ruby’s time line was deeply ingrained, a habit that I’d found difficult to break.

She tipped her head back and laughed. “I missed you, too, Harper.” Deflecting, as always. It was almost noon, and she looked like she hadn’t gone to sleep yet. Maybe she’d been with the lawyer. Maybe she’d gone to see her dad. Maybe she’d tried somewhere else—anywhere else—before coming here. Maybe she’d wrung these last twenty-four hours of freedom for all they were worth.

About the author, Megan Miranda

Megan Miranda is the New York Times bestselling author of ALL THE MISSING GIRLS, THE PERFECT STRANGER, THE LAST HOUSE GUEST, which was a Reese Witherspoon Book Club selection, and THE GIRL FROM WIDOW HILLS. She has also written several books for young adults, including COME FIND ME, FRAGMENTS OF THE LOST, and THE SAFEST LIES.

Why pick up Such a Quiet Place by Megan Miranda

This novel has three things I love in my reads: an evocative atmosphere (the community where Harper lives), the characters (Harper, Ruby, and what we learn about everyone else) and voice (all in Harper’s POV, but very expertly done.).

Miranda sets the scene in the first half–tells us about the community that looks wonderful from the outside, but not so great on the inside, and about Ruby, murder suspect and undeniably a very layered individual. All of it pays off towards the end, so take the time to soak it all in.

I guessed some of the twists, but that didn’t spoil the fun for me at all. The narrative grows on you and you find yourself wondering about human nature, about the pressures of being part of a community and what people would do to blend in or keep others appeased.

Pick this up if you like a slow-burny tale, with plenty of intrigue and helpings of neighborhood drama. This was a great distraction during covid times, and I plan to look up other books from Miranda.

Have you read the thriller Such a Quiet Place by Megan Miranda? If yes, what did you think of it? What crime novels have you read lately ?

THE BLUE BAR is on a 25% discount for all pre-orders through 22nd APRIL, in case anyone wants to support the book and snag it at a reduced price at Barnes & Noble. 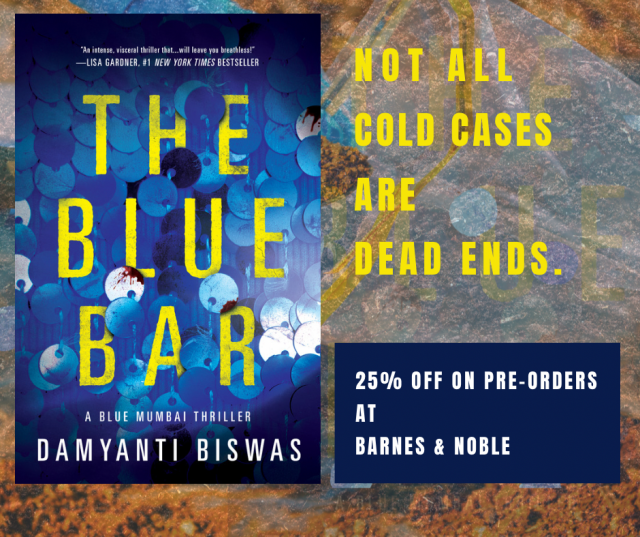 This is the last week, so get in on it before teh giveaway closes! Entries are simple: click the RAFFLECOPTER link above, and follow the instructions. It calls for a Goodreads add, a subscription request, and a follow on Instagram.