The Third Prompt of the Rule of Three 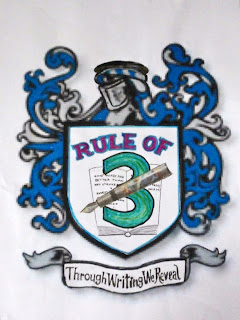 We’re in the second week of Rule of Three! Thanks go out to all the participants who posted such intriguing first and second episodes for their stories.

Time for the 3rd prompt of the Rule of Three:

Choose ONE OR MORE from the following:

The impending misfortune foreshadowed in the 1st prompt comes to pass, but one or more characters laugh at it.

Betrayal is in the air.

A long-kept secret is revealed.

Any genre and time period is okay for your story, but the setting must be Renaissance. (Change in setting will deduct points during judging rounds.)

Please mention the prompt you followed for the story. (Not following any of the prompts for the week would deduct points during judging rounds).
Other requests:

Put a button allowing folks to subscribe to your blog via email. It will help us as hosts/judges to keep track of all four of your posts.

Let people follow you on twitter via your blog. Guarantees more exposure for your writing and the blogfest through Stuart’s #REN3 Paper.li twitter newspaper.
Tweet your post, or any other posts you like, via the #REN3 hashtag and share them on FB and G+ if you’re on those platforms.
Any questions, tweet us up @StuStoryteller @damyantig @ficflash @JCMartin_author, or just drop us an email!
Looking forward to reading all your posts for the second episode of the Rule of Three!  Huge thanks to co-hosts Storyteller and author, Stuart Nager,  Flash Fiction Author Lisa Vooght, and  Fighter writer, J.C. Martin. All the best to all of us, hosts and participants alike!