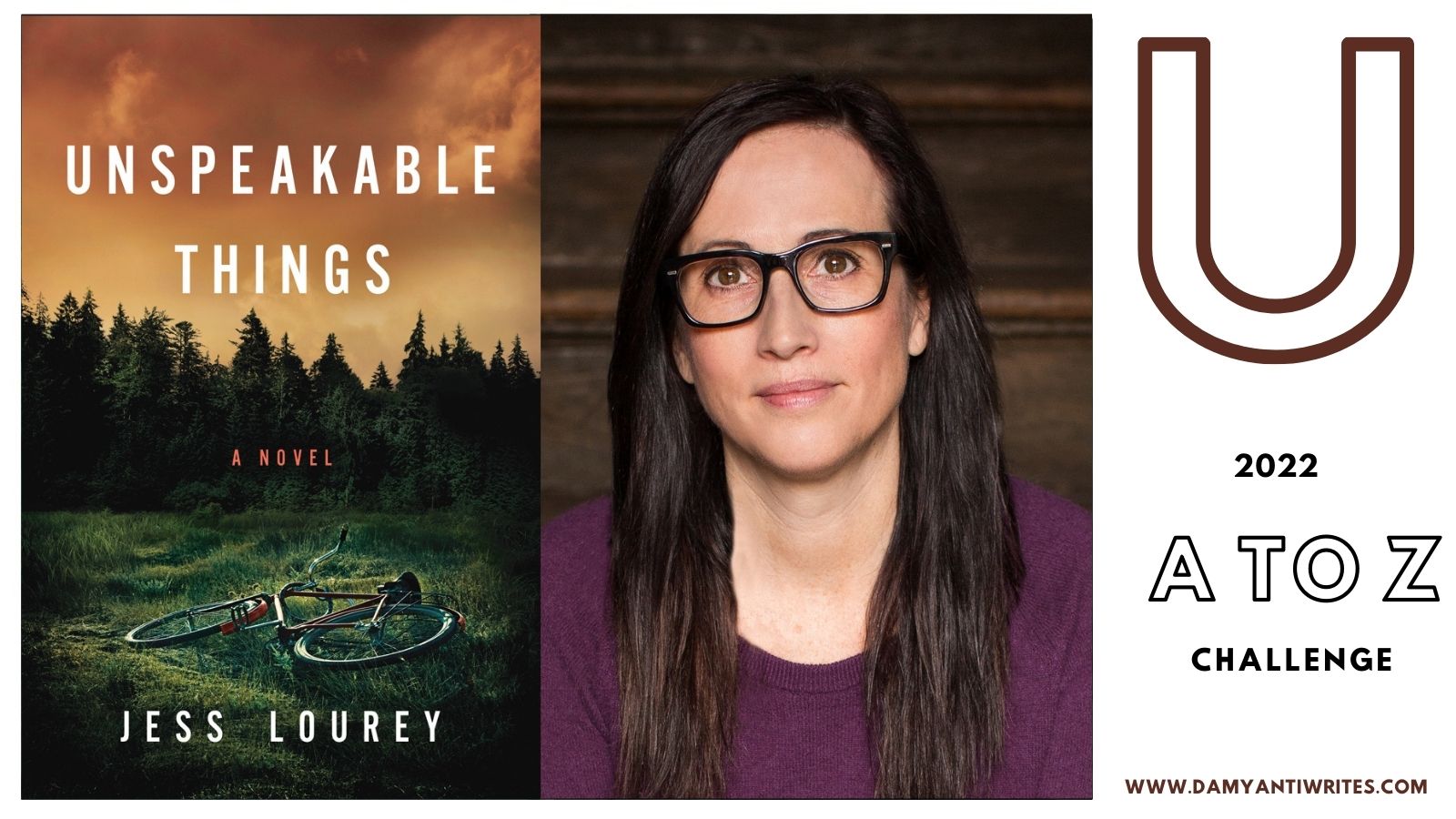 As the A to Z Blogging Challenge hums along towards its end, I’m still writing about thrillers of all stripes, mysteries, and crime novels for 26 days in April, based on the letters of the alphabet. All posts are linked here.

I’m also giving away a 50 USD Amazon Gift card, to support reading, and to help my next novel THE BLUE BAR along on its journey.

After These Women by Ivy Pochoda, I bring you Unspeakable Things by Jess Lourey.

Inspired by a terrifying true story from the author’s hometown, a heart-pounding novel of suspense about a small Minnesota community where nothing is as quiet—or as safe—as it seems.

Cassie McDowell’s life in 1980s Minnesota seems perfectly wholesome. She lives on a farm, loves school, and has a crush on the nicest boy in class. Yes, there are her parents’ strange parties and their parade of deviant guests, but she’s grown accustomed to them.

All that changes when someone comes hunting in Lilydale.

One by one, local boys go missing. One by one, they return changed—violent, moody, and withdrawn. What happened to them becomes the stuff of shocking rumors. The accusations of who’s responsible grow just as wild, and dangerous town secrets start to surface. Then Cassie’s own sister undergoes the dark change. If she is to survive, Cassie must find her way in an adult world where every sin is justified, and only the truth is unforgivable.

The lonely-scream smell of that dirt basement lived inside me.

Mostly it kept to a shadow corner of my brain, but the second I’d think Lilydale, it’d scuttle over and smother me. The smell was a predatory cave stink, the suffocating funk of a great somnolent monster that was all mouth and hunger. It had canning jars for teeth, a single string hanging off a light bulb its uvula. It waited placidly, eternally, for country kids to stumble down its backbone stairs.

It let us swing blindly for that uvula string.

Our fingers would brush against it.

The relief was candy and sun and silver dollars and the last good thing we felt before the beast swallowed us whole, digesting us for a thousand years.

But that’s not right.

My imagination, I’d been told, was quite a thing.

The basement wasn’t the monster.

And he wasn’t passive. He hunted.

I hadn’t returned to Lilydale since that evening. The police and then Mom had asked if I wanted anything from my bedroom, and I’d said no. I’d been thirteen, not stupid, though a lot of people confuse the two.

Now that his funeral had called me home, that cellar stink doubled back with a vengeance, settling like a fishhook way deep in my face where my nose met my brain. The smell crept into my sleep, even, convinced me that I was trapped in that gravedirt basement all over again. I’d thrash and yell, wake up my husband.

He’d hold me. He knew the story.

At least he thought he did.

I’d made it famous in my first novel, shared its inspiration on my cross-country book tour. Except somehow I’d never mentioned the necklace, not to anyone, not even Noah. Maybe that piece felt too precious.

Or maybe it just made me look dumb.

I could close my eyes and picture it. The chain would be considered too heavy now but was the height of fashion in 1983, gold, same metal as the paper airplane charm hanging off it.

I’d believed that airplane necklace was my ticket out of Lilydale.

I didn’t actually think I could fly it. Big duh, as we said back then. But the boy who wore the necklace? Gabriel? I was convinced he would change everything.

And I guess he did.

About the author, Jess Lourey

Jess Lourey writes about secrets. She is the bestselling Agatha, Anthony, and Lefty-nominated author of the critically-acclaimed Mira James mysteries, which have earned multiple starred reviews from Library Journal and Booklist, the latter calling her writing “a splendid mix of humor and suspense.”

Why pick up Unspeakable Things by Jess Lourey

Okay, so as the title suggests, this is dark, almost as dark as dark gets. Trigger warnings include child abuse. It is based on a real-life story. A little googling will tell you which one.

What drew me in with this book was 12-year-old Cassie’s voice, and it would not let go. You feel for her very strongly, and about the monsters she’s afraid of, the fear she feels in places where she should be most safe.

The characters are drawn so well, even those that are unpleasant. The telling is literary, not pace-driven, so this is not a thriller for you if you prefer a series of quick, successive twists. It deals with issues like racism, patriarchal sexism, and homophobia in the body of a thriller. I also liked the open-endedness of the conclusion. In case you need a more ‘conclusive’ ending, the epilogue was excised from the book and is available on the author website.

If riveting narration, dark and atmospheric tales in small-town settings, and complex coming-of-age tales are your jam, pick this one up. It will swallow up a day or two of your life, but it will be worthwhile.

Have you read the book Unspeakable Things by Jess Lourey? If yes, what did you think of it? What crime novels or thrillers have you read lately ?