Writing Wednesdays: Have You Found Your Voice? 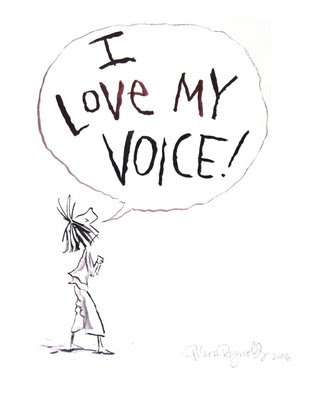 For all the writers out there, one of the criticisms that often comes back from an agent or an editor is a lack of voice, or a voice that is not strong enough: “You need to find your voice,” they say.It is just one of those things, quite abstract. Infinitely more difficult to fix than “passivity” or “run-on sentences”, for instance.

So what is a “voice”, exactly, and where/how do you find it?Here are two opening passages from two different novels:

“It was the middle of a bright, tropical afternoon that made good our escape from the bay. The vessel we sought lay with her main-topsail aback about a league from the land and was the only object that broke the broad expanse of the ocean.”
“Call me Ishamel. Some years ago—never mind how long precisely—having little or no money in my purse, and nothing particular to interest me on shore, I thought I would sail about a little and see the watery part of the world.”
The second one of course, is immediately recognisable. That is how Herman Melville begins Moby Dick. But the first is by Melville too.
It is from his first novel Oomo.When you read the two, the second one is stronger, more interesting, demanding of the reader’s attention. And that is the difference a strong voice can make. It is the way a writer speaks, whether through the narrator, or through the characters. It is a certain authority, not intrusive, but certainly not indiscernible.
From these examples, you could draw a conclusion that the second voice is more mature because the author has matured over time, and through his work. You would be right. A seasoned writer does have a more authoritative voice than a beginner–has also probably mastered the craft, and learnt to give different voices to all the different characters.
But for those beginner writers who would like to have a strong voice from the word go, all is not lost.
Here are a few do’s and don’ts to help you on your way to find your voice:
DON’T
-read writers with brilliant voices and emulate them to create your own. A little writing exercise in the voice of a write you admire is ok, an entire story or novel is not.
-try to impose style on your writing, so that you artificially generate tension, create a strong voice, but are unable to sustain it throughout your work.
-make the narrator’s voice so individual and distinctive that it overwhelms your story and characters, unless that is the idea behind your work.
DO
-write as much as you possibly can. The more you write, the easier it is to find your voice.
-be honest to who you are, write (as much as possible) what you know, draw from your own experiences in life.
-read writers with brilliant voices and analyse why the voices work.
-read some of your own work, written a month or two ago, so you can be objective. When you read your work, underline the bits that impress you. Read them aloud. These are the parts that give you the best idea what your voice is like at the moment. Now, take a different colored pen and underline the bits you do not like. Read these parts aloud and figure out why they seem worse than the parts you liked. Is it abstraction? Is it too much “tell” and very little “show”? Is it because the characters are not well fleshed out by your writing? Take these faults one by one and address them.
By doing the underlining and reading exercise, you would be mechanically feeding your unconscious, training it to be the most honest part of you, to be sensitive to your own natural voice.
Always remember that a voice is the expression of who you are as a person and an artist. The more you write, the stronger it will be. And in the meanwhile, you can always help it along using the tips given here.
Published authors, do weigh in with further tips in the comments. And to everyone on the quest, lots of good luck with finding your voice! Here’s a post by Emily R King on how to hone your voice.