Want to Stop the Whistleblower?

After  The Blood She Betrayed by Cheryse Durrant last week, here’s Stop the Whistleblower,  a thriller by Charles Deemer. He is a retired screenwriting professor with many publications and
productions. Stories In Overdrive, of which Stop the Whistleblower is
#1, are designed to be quick engaging reads for busy people, where story
trumps rhetoric.

Elevator pitch: Before Ray can blow the whistle on a dangerous sun tan pill, he is
slipped an overdose and turns into a black man. Now no one believes him
— and he even gets arrested for the disappearance of his own white
self. It’s David against Goliath in his struggle to reveal the truth. 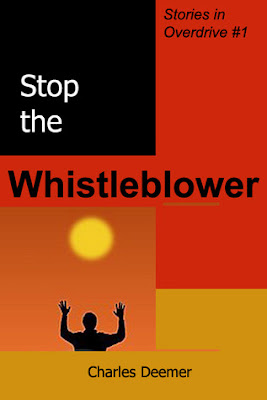 Teaser Excerpt:
The bed is empty.
The bathroom door is open. Sandy
is taking a shower.
Ray is on the divan, still
partially dressed. He stirs, rolls over – and shockingly: RAY IS
NOW BLACK. But he isn’t aware of this yet.
He stands up and stretches.
Sandy comes into the room, a towel
wrapped around her, and sees Ray – and immediately screams.
The towel drops, she turns and
races back into the bathroom. The lock clicks as she locks the door.
Ray is puzzled.
“Sandy?”
There’s no reply.
“Sandy,
what’s wrong?”
He turns and across the room
catches a glance of himself in a dresser mirror. He freezes.
He moves slowly toward the mirror,
hands going to his face, feeling himself, touching the change he sees
in himself.
In front of the mirror he stares
at his image with confusion and shock. He rubs his skin, hard,
fiercely, but nothing changes. He is still very black. He steps back.
He crosses the room to the bathroom door.
“Sandy, what
happened to me? Who was here last night? Answer me, goddamn it!”
Behind the closed door: “Ray?”
“Of course
it’s Ray! What happened to me?”
“You sound
different.”
“Open the
door.”
“I don’t
understand this.”
“Neither do
I. I’m going to give you your clothes. I’ll set them on the floor in
front of the door. Then I’m going to wait across the room so you can
get them. Get dressed and then we’ll talk. Will you do that?”
No reply.
“Sandy?”