What Books would You Suggest to an Emergent Reader? 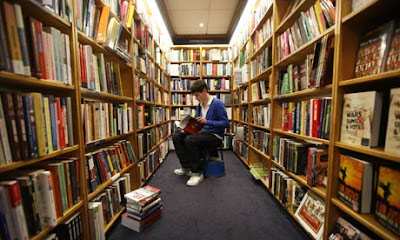 I’ve recently found myself looking for books for teens and adults which would help them “polish their English-language skills.”
I’ve always been an avid reader and though English is not my mother tongue, it is the language I’m most comfortable in–courtesy the books I’ve read since early childhood. I absorbed grammar, syntax and vocabulary through constant reading, and though that makes me a rather indifferent language teacher, it makes me a competent writer and an excellent reader of the language.
In my opinion, no amount of grammar schooling can replace reading when it comes to learning a language, and it seems other folk have similar opinions (and suggestions) :

The first novel that leapt to mind was Andre Dubus III’s “House of Sand and Fog,” because it’s about a well-educated immigrant from Iran forced to settle for a job as a convenience store clerk. But things don’t end well for Genob Sarhang Amir Behrani. Another novel about an immigrant, Jhumpa Lahiri’s “The Namesake,” has a more hopeful outcome. The writing in both books is accessible (in Ms. Lahiri’s case, it’s often beautiful).

I looked online for lists of books recommended by librarians and teachers for so-called emergent adult readers. These books are also sometimes known as “high-low,” meaning high-interest plots with lower levels of vocabulary. Many of the suggested books are short, which doesn’t always make sense to me. One of the most demanding books I’ve ever read was “The Red Badge of Courage,” whereas some of Stephen King’s door-stoppers seem ideal for reading practice. Another short book that often appears on these lists is John Steinbeck’s “The Pearl,” which seemed like a tough slog to me when I read it in school, although I ended up loving it. Also, the idea of “The Adventures of Huckleberry Finn” being a good book for emergent adult readers strikes me as ludicrous. Better one of Larry McMurtry’s Western hulks, Pat Conroy’s yarns or Herman Wouk’s sagas.

So that was Cynthia Cross in the Wall Street Journal with her suggestions.
What  books would You suggest for
a. teens
b. adults
who are trying to practice their reading skills and absorb new words through reading fiction?
(These don’t have to be classics or bestsellers— just books that are accessible to the new reader, yet contain plots engaging enough to hold the reader’s interest.)