Why do #Writers Drink?

Read this recent article in the Guardian, about writers and alcohol:

Does it help writers to drink? Do they drink any more heavily than
any other social group – doctors, lawyers, shop assistants or (see Mad Men) advertising executives? A famous drinker himself, Amis considers this question in his Memoirs,
and – comparing writers to actors – suggests “displaced stage fright as
a cause of literary alcoholism. A writer’s audience is and remains
invisible to him, but if he is any good he is acutely and continuously
aware of it, and never more so while it waits for him to come on, to
begin p.1. Alcohol not only makes you less self-critical, it reduces
fear.” According to Amis, a large glass can supply “that final burst of
energy at the end of the day” but should be avoided any earlier: “The
writer who writes his books on, rather than between, whisky is a lousy
writer. He is probably American anyway.”

Amis had little time for
American writers, which explains the prejudice behind that last remark.
But it’s true that modern American literature is strewn with examples of
alcoholic excess: Poe, Hemingway, Faulkner (“I usually write at night. I
always keep my whiskey within reach”), Hart Crane, Tennessee Williams, Truman Capote,
Dorothy Parker (“I’d rather have a bottle in front of me than a frontal
lobotomy”), Ring Lardner, Raymond Chandler, O Henry, Jack London,
Delmore Schwartz, F Scott Fitzgerald, (“Too much champagne is just right”), John Berryman, Jack Kerouac, Charles Bukowski, Anne Sexton, Patricia Highsmith – the list is long even without including those, such as Hunter S Thompson,
more renowned for their experiments with other substances (“I hate to
advocate drugs, alcohol, violence or insanity to anyone, but they’ve
always worked for me”). 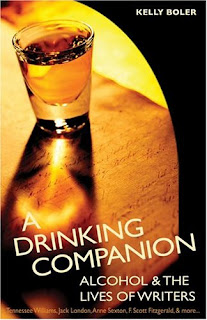 I’ve never found alcohol very helpful while writing, but I confess I gorge on chocolates and tea when I’m in writing distress. The blank page is terrifying (as is a page filled with crap that needs to be re-written) and I take what assistance I can get, only it isn’t alcohol. But alcohol and writers are obviously a popular mix, and someone has gone to the trouble of writing an entire book about it: A Drinking Companion. I’ll pick this up if I see it.

The article goes on to say:

Why do writers drink? Why does anyone drink? From boredom, loneliness,
habit, hedonism, lack of self-confidence; as stress relief or a
short-cut to euphoria; to bury the past, obliterate the present or
escape the future…… the words on the page are what matter. And most of them
get there despite the drinking, not because of it. “Drank like a fish,
wrote like an angel,” would make a pleasing epitaph. “Drank like a fish,
wrote like a fish” is more likely.

Do you need fortification before you can sit down and write a story, a blog post, an article, a novel? Does it ever take the form of alcohol?