Would You Read A Historical Horror? 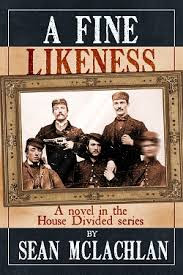 I’m not a hardcore horror fan, but I love historical settings. So I’m intrigued by A Fine Likeness, a historical horror by Sean McLachlan.

Elevator pitch: A Confederate guerrilla and a Union captain discover there’s something more dangerous in the woods than each other.

Teaser Excerpt:  The figurine looked like a two-headed eagle, its necks grotesquely
elongated from a bulbous and bloated body. Lean heads projected out to
curved beaks that ended in needle-sharp points, open in a pair of frozen
cries. It squatted on a heap of twisted human forms, claws digging into
naked backs.

The faces appeared mutilated, screaming in terror, and it
took a moment for Captain Addison to realize that all of them had two
faces. Some had a full set of features on either side of hideously
broadened heads, the space between them a sickly smear. Others had two
heads attached by the neck or an ear, as if the artist had caught them
in the process of splitting apart. The tortured souls on which the
monstrous eagle sat confirmed his guess. These had nearly two full
bodies each, sharing only the portion from the hip down, or a leg; in
one case all that connected an identical pair were their outstretched
fingertips as they looked into one another’s terrified eyes, mouths
rounded in mutual silent screams.

Something about the bird’s feathers struck him as strange.
Examining the minutely carved surface he realized the artist had carved
not feathers, not the natural plumage of a God-created bird, but a bed
of worms covering the eagle’s entire body except for its beak and
cruelly clutching claws. They seemed to writhe over its surface, coil
and entwine with one another, those on the bird’s underbelly reaching
down toward the victims beneath, tiny mouths open in anticipation of a
feast.

“The captain shuddered and looked away. What abomination did these guerrillas worship?