Interviewer: How much rewriting do you do?
Hemingway: It depends. I rewrote the ending of Farewell to Arms, the last page of it, thirty-nine times before I was satisfied.
Interviewer: Was there some technical problem there? What was it that had stumped you?
Hemingway: Getting the words right.

Thirty-nine revisions to get the words right? I couldn’t believe it.
I thought great writers had golden pens. As soon as they started writing, the words flowed and everything fell into place. Did Hemingway really need thirty-nine revisions of the final page just to get the words right? The answer is yes, and that happens to be the number one secret of great writers—rewriting.
The greatest writers are great, not only because they have a way with words and not only because they have great ideas, but more importantly, because they carefully craft their writing into a final draft that reads better than the first ever possibly could. 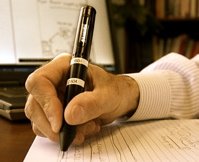 The above is an excerpt from a FABULOUS post by Joseph Putnam, which is highly recommended reading for all new writers.

The bolded out sentence is my emphasis. That was me about 6 years ago, when one day, my husband, a corporate honcho and a non-writer, broke it to me: no one gets it right at the first attempt, all writing is re-writing.

I’ve got the lesson down pat for short stories, and in some cases, rewritten a story about 25 times, before it went on to be pubbed in an anthology.

Now, 28000 words into the first draft of a novel, I need to re-learn that lesson, just let go and write. And then Re-write, Rinse, Repeat.

So, dear writers, what is the most number of times you’ve re-written a piece, a story, a novel?