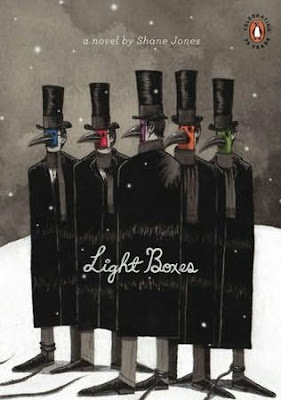 An extract from Shane Jones’ novel “Light Boxes” cheered up my morning today, thanks go to my friend Leon Wing for talking to me about this book at Seksan readings.

The last part of the piece was delightfully breezy, and had an escapist-yet-very-real fable-like quality.

Apparently, the internet has been going crazy over it. I want to get my hands on the book. And the story behind it is also nothing short of fairy-tale, which has only added to its appeal…. I obviously live in a cave or I’d have heard about it before!

Publisher Hamish Hamilton has this to say about the story behind Light Boxes:

In February 2009, a tiny independent publisher called Publishing Genius printed 600 copies of a strange, mysterious little book called Light Boxes – a sort of adult fairytale by a young NY-based writer called Shane Jones, about a town that’s waged a war on the month of February. It was the first book that Publishing Genius published, but by summer that year the blogosphere was spinning with excitement and they were already selling way more copies than they could manage to distribute. Soon, Penguin US had bought the rights to reprint it, Spike Jonze had optioned the film rights, and finally we’d managed to get our hands on it too. And were hooked. The otherworldly, allusive quality of this dreamy fable instantly set it apart and we had to publish it too. Now, the last few copies of the original run published by Publishing Genius are out of bounds unless you have a spare $400.00 to get hold of one on Amazon.com, but luckily we’ve just published our own edition so the Light Boxes story lives on in the shape of a little, Japanese-style jacketed paperback, which we hope makes the book as distinctive on the outside as it is on the inside.

I did need some cheering up, because of this little piece of news. Oh, well.