Writing about reading “The Reader” 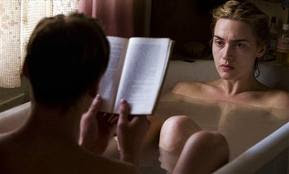 “The Reader” by Bernhard Schlink was made into a movie two years ago, and Kate Winslet won an Academy Award for her role in it, I guess so everything that can be said about it has possibly already been said.

It was an impulse buy at Borders last week, along with Island of Lost Girls.

I am still reading The Reader and am absolutely gobsmaked by the simplicity of its language. I will never be able to read the book in its German original, so I won’t know how the author originally intended the book. But the English version is spare, even sparse, and absolutely unapologetic about its lack of trimmings.

And the effect is nothing short of fantastic. The story, which I have not yet read till the end, has managed to hold my attention so far, as have the characters of the narrator Michael, and Hanna, who is later revealed to be a retired Auschwitz guard.

I’m looking forward to finishing the book, though I know it can’t end very well for Hanna.

I can’t get over how both Michael, the character, and I, the reader, feel so much for an essentially abusive woman.

Lots to learn there, and I think I would read the book a second time to observe exactly how Schlink does it.