A 101 guide to Writing Backstory 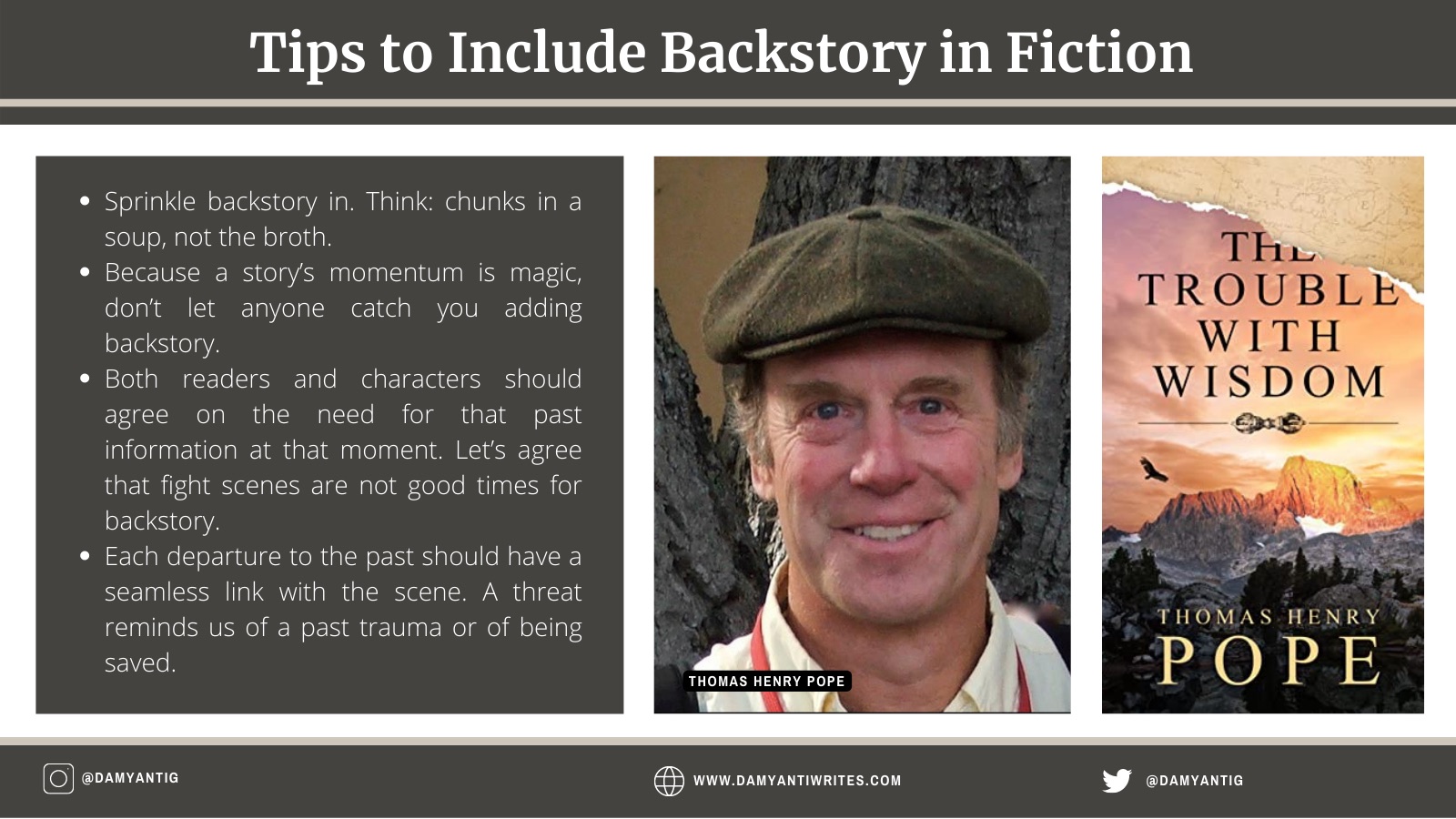 Backstory is behavior, David Corbett, one of my wonderful writing teachers, taught me.

While writing my first novel, You Beneath Your Skin, I found writing backstory quite the challenge. I wanted the reader to know everything about all the characters, immediately. While I hope I don’t make that rookie mistake any more, writing backstory remains one of my weaknesses–how much, when, and how still puzzles me when penning the first draft.

Which is why, when one of my wonderful author friends, Thomas Henry Pope, offered up a post on writing backstory, I was thrilled. His dystopic novel, The Trouble with Wisdom, drops soon.

This post is to celebrate the launch, as much as it is for me and other writers to learn more about writing backstory into our work without bringing the pace to a crashing halt.

Backstory: The Birthing Ground of Our Characters’ Motives

The thoughts, feelings, and actions of characters moving through their life’s challenges provide a rich palette for storytelling. If characters behave with constancy inside a smart plot, our readers will trust them (and our work). Each character’s behavior follows motives, which we authors take pains to draw up. In turn, those motives were formed from events and consequences in our characters’ pasts. When presented in a book, these histories are called backstory.

Because writing is linear—words on a page—it is a challenge to include past information without throttling the forward motion of our story. It’s best if we add it in ways that drive the story.

For insight, examine how you include backstory in each scene of your day.

Every writing aspect can reveal backstory. Use them all; make them art forms.

Writing Backstory: The Short and Long of It – Brushstrokes and Flashbacks

Brushstroke—a phrase or a sentence at the perfect time can cause earthquakes. When linked to the moment and relevant to the plot, brushstrokes have great power.

Flashback – a longer passage works best if it is central to the story.

[Example: In a pivotal first meeting one man says to another,,,]

“We know what happened to your father.”

The day after his mother had howled that his father would never be coming home, Finn, then six years old, found the pieces of his father’s photograph in the trash. In the early years when she slept, he would fit his father back together on his desk. Even now, the meticulously repaired image traveled with him in a laminated cover.

What if you think the reader needs a bunch of clarifying information? Reconfigure the scene or how the story gets there. Or put a character in a position of stress (draws readers) that demands he tell that information.

An Example of Being Heavy-handed, pulled from a bestselling thriller: “The FSB was today’s version of the KGB, which itself carried all the murderous past of the notorious NKVD under Stalin.”

A Parting shot: look for backstory in every passage you read.

———————-
Thomas Henry Pope is a journalist, actor, and songwriter. His boyhood travels behind the Iron Curtain exposed him to the failings of Materialism and laid the groundwork for Imperfect Burials. His novel The Trouble with Wisdom, unpacks a trans-continental quest by four intrepid souls in the post-apocalyptic world of 2055. Wilderness survival training, years of living off-the-grid, and growing food from seed he saved ground his insight into this dystopian existence. He has worked in Hollywood, written for HuffPost, traveled widely, and taught English to foreigners. He lives in Vermont.

As readers, have you ever been annoyed by backstory, or craved for it? As authors, do you find writing backstory tricky? Do you have questions for Thomas?