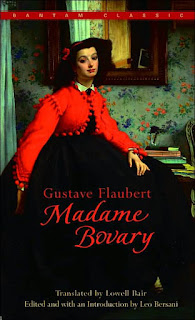 I was flipping through “Madame Bovary”, written by Gustave Flaubert, when something struck me about a particular dialog. Rodolphe, a confirmed cad and runner-after-women is trying to seduce the pretty and bored wife of a country doctor, Emma.

The venue is an agricultural fair, and I am struck by how Flaubert manages to tell us exactly what he thinks of Rodolphe through the contrasting background voices that intrude into Rodolphe’s seductive monologue:

“Thus we,” he said, “why did we come to know one another? What chance willed it? It was because across the infinite, like two streams that flow but to unite; our special bents of mind had driven us towards each other.”

And he seized her hand; she did not withdraw it.

“Just now, for example, when I went to your house.”

“Did I know I should accompany you?”

“A hundred times I wished to go; and I followed you–I remained.”

“And I shall remain to-night, to-morrow, all other days, all my life!”

“To Monsieur Bain of Givry-Saint-Martin for a merino ram!”

“And I shall carry away with me the remembrance of you. But you will forget me; I shall pass away like a shadow.”

I searched, then and searched some more, and figured out that this writing technique is called the ironic juxtaposition.

Use irony to hilarious effect by putting two contrary things together.

I am so kicked with the way Flaubert has used it, I am going to try and use it in one of my stories. I know this is no writing technique for a novice, but there is no harm in trying, is there?

Have you found other examples of such writing, where the author uses the contrast to such telling effect?