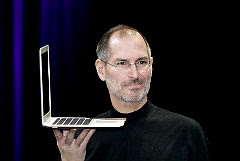 I was talking about it just the other day, and inwardly regretting getting my MacBook…..I so wanted an ultra-light laptop(woweeee, great for my back while I travel), which I could use happily anywhere without being terrified of virus attacks. Writing while on the move has been always a habit of necessity ever since I started on freelance, and a laptop like MacBook Air will make that SO stress-free:

Mr. Jobs took pride in demonstrating the MacBook Air, a three-pound notebook computer that will sell at a base price of $1,799. Mr. Jobs said that in order to reach his goal of making the industry’s thinnest computer, Apple’s designers made a series of trade-offs that the majority of laptop buyers may not appreciate. The computer uses a 1.8-inch disk drive, on which no more than 80 gigabytes of data can be stored. Memory is limited to a standard two gigabytes of RAM and its processor is slower than those of Apple’s other laptops. The design team jettisoned an optical disk storage device for playing DVDs. Mr. Jobs demonstrated a feature called Remote Disk that will make it possible to play the contents of a DVD via a wireless network from another Macintosh or Windows PC. Also, the MacBook Air’s battery is not removable.Responding to a question about the growing array of media, including digital photographs, movies and music, that now swell most users’ hard drives, Mr. Jobs said, “Maybe this isn’t the computer for you.”
But it is the computer for me, Mr. Jobs….my baby isn’t brimming over with media files, I am just filling my Macbook with my write-ups, and 80 GB is good enough for that, thank you very much!