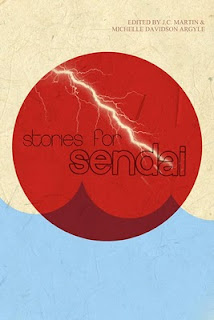 Stories for Sendai is a charity anthology by J.C. Martin and Michelle Davidson Argyle in support of the victims of the Japan earthquake and tsunami, and I’m happy to have my piece included in the final list.

This anthology deserves all the support it can get.

The piece I wrote was born of one sentence:

A dismissal letter was not the sort of gift Kartar Singh expected to receive on his fiftieth birthday.

Of course, as readers of my other blog Daily (w)rite would know, Kartar Singh was what I had named my late lamented betta fish, who was a brave warrior indeed. He was named after my neighbor, a really quarrelsome young man.

I just wrote the opening sentence ten times in ten different ways, and then let the second sentence follow from there. All I knew at that point was that the story would feature the devastating floods that hit Mumbai in 2005. I knew also about what would happen to Kartar Singh, but other than that, I pretty much dreamed my way through the story.

I wrote it, rewrote it, tore it apart, wrote it again, polished it, sent it out, and it got accepted. All in a week.

The point of all the rambling so far is this: Creativity, at least for me, is an uncertain thing.

At the end of the day, what works for me is struggling with writing day in and day out; writing on days I don’t feel like writing, am too exhausted to write, am too depressed to write, too busy to write.

Even the pieces that came relatively easier came because I practiced writing everyday, so that when the story wanted to tell itself, I had the means to take down the dictation.

I don’t know if I have talent, but I hope I shall have enough perseverance to make up for any lack (to an extent).

What about you? What is your writing process, and what works for you as a writer?

P.S: Here’s a post by writer-friend Karina, where she talks about the resonance of writing between writers and readers and how the writing process affects and is affected by it. If you’re looking for a post on the writing process, this is a very interesting, and imho, accurate take on the subject.