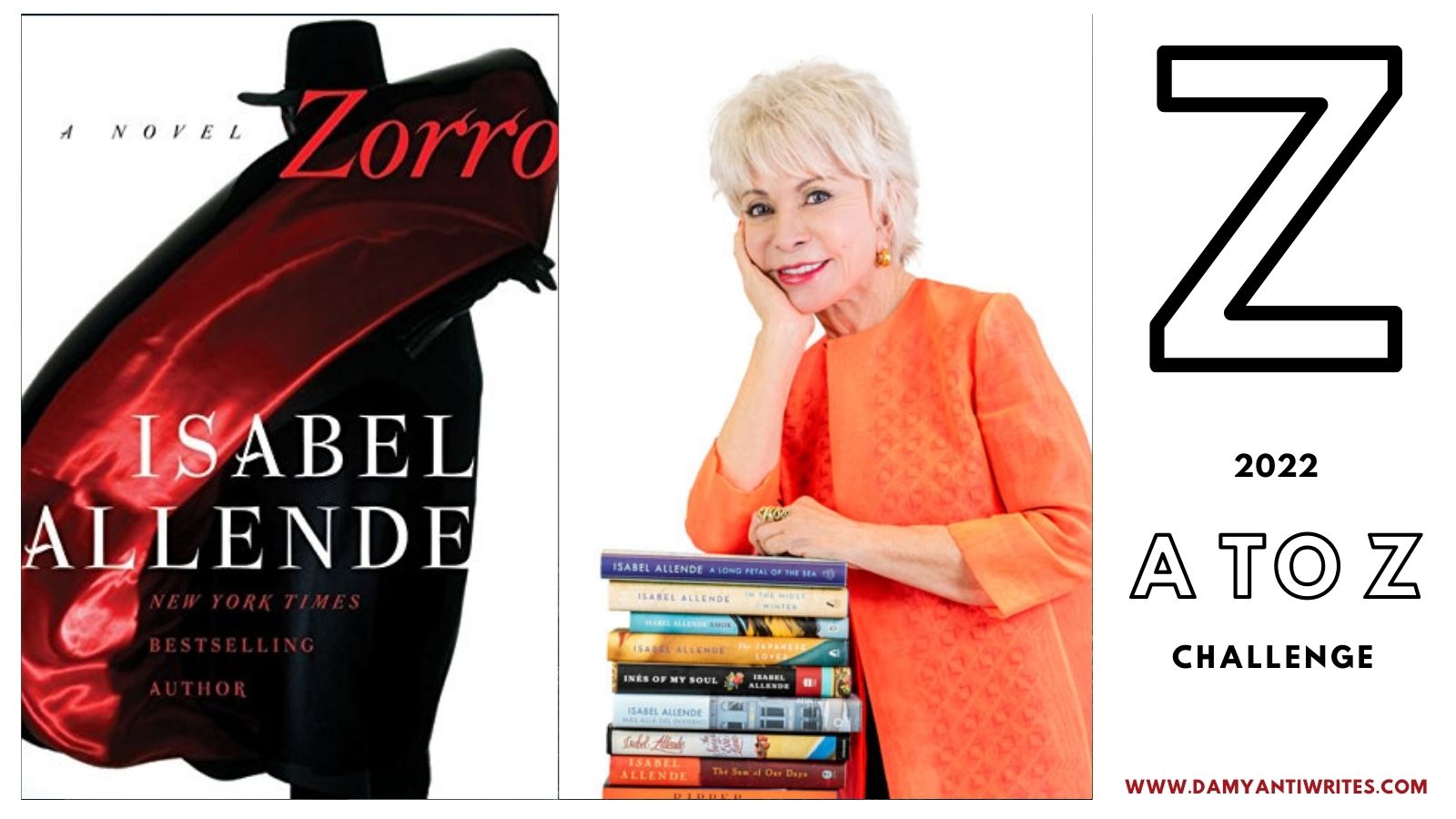 This is the LAST POST of the A to Z Blogging Challenge 2022, the 26th post in my series talking about thrillers of all stripes, mysteries, and crime novels for 26 days in April, based on the letters of the alphabet. All posts are linked here, and I’ll soon have a post that compiles all of them.

TODAY IS THE LAST DAY OF THIS GIVEAWAY, so scroll below to enter!

After You by Caroline Kepnes, I bring you Zorro by Isabel Allende.

Born in southern California late in the eighteenth century, Diego de la Vega is a child of two worlds. His father is an aristocratic Spanish military man turned landowner; his mother, a Shoshone warrior. At the age of sixteen, Diego is sent to Spain, a country chafing under the corruption of Napoleonic rule. He soon joins La Justicia, a secret underground resistance movement devoted to helping the powerless and the poor. Between the New World and the Old, the persona of Zorro is formed, a great hero is born, and the legend begins. After many adventures — duels at dawn, fierce battles with pirates at sea, and impossible rescues — Diego de la Vega, a.k.a. Zorro, returns to America to reclaim the hacienda on which he was raised and to seek justice for all who cannot fight for it themselves.

A few days later Captain Alejandro de la Vega galloped into the mission. He leaped from his horse, tore off his heavy uniform jacket, his neckerchief, and his hat, and thrust his head into the trough where women were rinsing their wash. His horse was covered with foam; it had carried its rider many leagues, along with all the gear of the Spanish dragoon: lance, sword, heavy leather shield, and carbine, plus saddle. De la Vega was accompanied by a couple of men and several packhorses loaded with supplies. Padre Mendoza rushed out to welcome the captain with open arms, but when he saw that he had brought only two trail-weary soldiers as depleted as their mounts, he could not disguise his frustration.

“I am sorry, Padre. I have no available soldiers other than these two good men,” the captain apologized as he wiped his face on his shirtsleeve. “The rest of the detachment stayed behind in Pueblo de los Angeles, which is also threatened by the uprisings. ”

“May God come to our aid, since Spain does not,” the priest grumbled.

“Do you know how many Indians will attack?”

“Not many here know how to count accurately, Captain, but according to my scouts it might be as many as five hundred.”

“That means no more than a hundred and fifty, Padre. We can defend ourselves. Who can we count on?” asked Alejandro de la Vega.

“On me, for one—I was a soldier before I was a priest—and on two other missionaries, who are young and brave. We have three soldiers who live here, assigned to the mission. We also have a few muskets and carbines, ammunition, two swords, and the gunpowder we use in the quarry. ”

“My son, let us be realistic. Most of the Indians will not fight against their own kind,” the missionary explained. “At most, I can count on a half dozen who were brought up here, and a few women who can help us load our weapons. I do not want to risk the lives of my neophytes, Captain—they’re like children. I look after them as if they were my own. ”

“Very well, Padre. Shoulders to the wheel, and may God help us. From what I see, the church is the strongest building in the mission. We will defend ourselves there,” said the captain.

For the next few days, no one rested in San Gabriel; even small children were set to work. Padre Mendoza, who was expert in reading the human soul, knew he could not trust the loyalty of the neophytes once they saw themselves surrounded by free Indians. He was disquieted when he caught a glimpse of a savage gleam in a worker’s eye and witnessed the unwilling compliance with his orders: the neophytes dropped stones, burst bags of sand, got tangled in the ropes, and overturned tubs of tar. Forced by circumstances, Padre Mendoza violated his own rule of compassion and, without a twinge of doubt, as punishment sentenced two Indians to the stocks and dealt out ten lashes to a third. Then he had the door to the single women’s lodge reinforced with heavy planks; it was sound as a prison, constructed so that the most daring could not get out to wander in the moonlight with their lovers. A solid, windowless building of thick adobe, it had the additional advantage that it could be bolted from outside with an iron bar and padlocks. That was where they locked up most of the male neophytes, shackled at the ankles to prevent them from collaborating with the enemy at the hour of battle.

“The Indians are afraid of us, Padre Mendoza. They think our magic is very powerful,” said Captain de la Vega, patting the butt of his carbine.

“Believe me, Captain, these people know what firearms are, all right, though as yet they haven’t discovered how they function. What the Indians truly fear is the cross of Christ,” the missionary replied, pointing to the altar.

About the author, Isabel Allende

Isabel Allende Llona is a Chilean-American novelist. Allende, who writes in the “magic realism” tradition, is considered one of the first successful women novelists in Latin America. She has written novels based in part on her own experiences, often focusing on the experiences of women, weaving myth and realism together.

Why pick up Zorro by Isabel Allende

Ok, so I’m cheating a little with this one. Zorro is not a crime novel, or maybe it is–because resistance to authority is against the law, and thus a crime.

I picked it because I love Allende, and even though this is not her best offering, it is certainly her most unusual. It is the backstory for the superhero Zorro, aka Don Diego de la Vega, whose 18th century adventures were serialized by McCulley from the 20’s to the 40’s.

I love how Allende breathes life into the character, and takes on the challenge of making something cartoon-ish and larger-than-life, quite lifelike. Allende is her lyrical and charming self with Zorro, showing off his cool, fashionable charisma, his beautiful horse–essentially retaining all the cliches, but making them work.

Pick it up if you’d like an escape read that never settles in one place, taking place in a range of of settings, each colourful and intricate. Real historical figures march on and off stage, a wide cast of characters and adventures and details keep you turning the pages. There’s tragedy and romance, but there’s also humor and heart, and I for one needed a dose of that after all the rather dark picks I’ve made so far for the A to Z.

This marks the end of the series, but hopefully you and I will continue our chat on Daily (w)rite pages, for months (and years?) to come.

Have you read the book Zorro by Isabel Allende? If yes, what did you think of it? What crime novels have you read lately ? 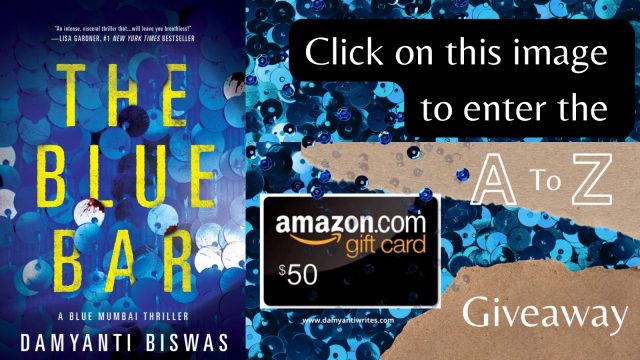 Today is the LAST DAY OF THIS GIVEAWAY to celebrate the challenge and get some support for THE BLUE BAR: