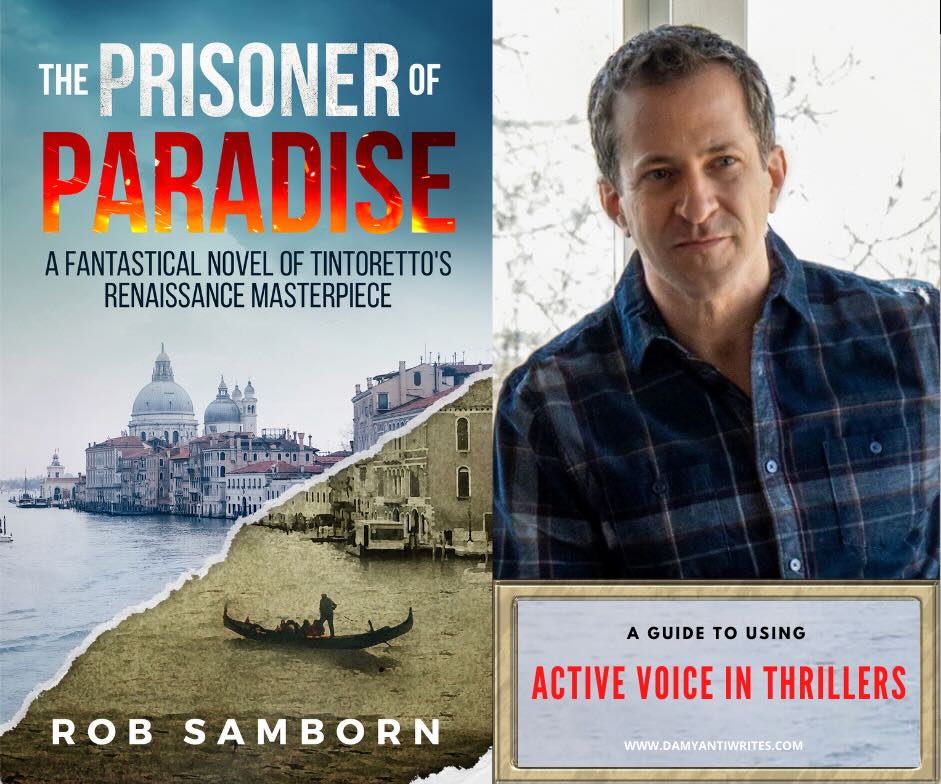 Thrillers were never the top of my reading list as a child or even as a growing adult. I could not stand the relentlessness of the thriller narrative, or that one or the other bad thing happened every few pages. Too harrowing for me, because my life was stressful enough without heart-stopping thrillers.

Years passed and as I started writing You Beneath Your Skin, I realized I had a thing for crimes–I wanted to use it as a way of examining society. And with each passing edit, the book came closer and closer to a thriller. The final product turned out to be not-quite-a-thriller. It was a debut, and it had its flaws. Pacing being the biggest one.

Over the years, I have hopefully improved in this regard because I’ve written another ‘thriller’ in The Blue Bar. Language-wise and with pacing, I still have much to learn, which is why I’m very pleased to welcome author Rob Samborn to Daiily (W)rite today, who is here with a guide to using active voice in thrillers. To see his advice in action, pick up his book,The Prisoner of Paradise! I’m reading it now, and it is good.

Ever notice how some thrillers read cinematically?

You can visualize the descriptions and action. You feel like you’re there with the characters. And if you don’t turn the page to find out what happens next… it might just kill you.

As a screenwriter-turned-novelist, I’ve had extensive training, education, and experience in cinematic writing. I’ve written nine feature screenplays (soon to be ten), five of which were optioned, I’ve been a script doctor on over four dozen projects, and I’ve had numerous writing assignments. My debut novel, The Prisoner of Paradise, is the first of a three-book series published by TouchPoint Press. I originally wrote this book as a script, which was optioned by a production company founded by DreamWorks execs.

Over the years, I’ve studied the art of cinematic writing in depth. There are certain techniques that create visually compelling writing that can be used in novel writing as much as they can be used in screenwriting.

Of course, there are many facets that contribute to compelling writing. Above all is character. If a reader doesn’t find a character engaging or believable, then all else flies out the proverbial window.

But once a reader commits to taking a journey with the characters, how do authors, especially thriller authors, engross readers so that “the book feels like a movie?” Authors like Dan Brown, Stephen King, Gillian Flynn, and Lee Child are masters of this craft.

There are multiple elements to cinematic writing, but the three most important are:

WRITING A CINEMATIC THRILLER: Use an active voice

Passive: John was punched by Mary.

However, even in an SVO construction, using ‘was’ with a gerund verb form (+ing) will make it passive:

There are many ways to make writing passive, but the most common uses ‘could + a sense verb,’ oftentimes combined with a gerund or OVS construction. To make it worse, an element of time is added (or worse than that, a past perfect tense).

I could see John was being punched by Mary when the doorbell rang.

Since we’re in first person, it’s implied that the narrator sees everything on the page. Therefore, using ‘could + a sense verb’ not only makes the writing passive, it’s redundant to the established perspective.

The use of ‘when’ further takes us out of the moment.

Unless you’re a witness in a trial, this type of writing will lull readers to sleep in a paragraph. Imagine a whole book stocked with them.

The active voice would be:

Now, before you jump down to the comments and say that’s simplistic writing, yes, it is. And you can’t have a full book of that, either. But it’s an active voice and there are ways of keeping an active voice with more interesting, varied writing.

Bricks shifted. A spray of ancient dust blitzed his lungs and coated his head.

Besides the active and varied sentence construction, notice how these sentences use choice, colorful words to help readers visualize the details of the situation.

This adage is another very common refrain. How do you show with words? How do you avoid telling?

Quite simply, strive for descriptive emotion.

Examples:
Telling: It was a humid day.

Showing: Thick air blanketed his body. Sweat beaded on his back.

Oftentimes, writing that tells is combined with a passive voice, such as:

John could feel it was a humid day.

When John left the house, he could feel it was a humid day.

Since we’re in John’s perspective, we can eliminate the use of ‘could’ and the sense verb entirely. In the context of the story, it would be implied that John left the house. To convert this sentence to showing, we can try:

Thick air blanketed his body beneath an overcast sky. Sweat beaded on his back.

Of course, this is not limited to the weather. In another example, rather than writing, “The noise got louder,” we can show and convey the feeling of sound with a simile:

The pounding intensified in volume and tempo, like a drummer on an ancient galley gearing up for ramming speed.

Thrillers need to drive the narrative forward. Using an active voice that conveys emotion will do that.

Of the three techniques, using mini cliffhangers is the easiest to incorporate. In screenwriting, you want to start a scene late and get out early.

Watch any movie or TV show and you’ll notice how clipped scenes are. This drives the narrative forward, regardless of genre, but especially with thrillers.

It’s no different with books. Here are some tips on how to end chapters and section breaks with mini cliffhangers:

Any time you can end a chapter or section early, you’ll tease the reader, making them crave information, and thus… create a page-turner.

Combine all three of these techniques and readers will say it’s a book that reads like a movie—one they won’t want to put down.

Readers: What thrillers do you love that read like movies?

Writers: What techniques do you use to incorporate cinematic writing?

Rob Samborn is the author of The Prisoner of Paradise, a dual-timeline thriller set in Venice, Italy, published by TouchPoint Press and the first of a series. His second book, The Painter of Paradise, is set for release on October 25, 2022. For more information about Rob and his work, please visit www.robsamborn.com.

Did you find this article on thriller writing useful? Do you use active voice in your writing? What novels have you read that you remember being cinematic? Have you read Rob Samborn’s The Prisoner of Paradise?

The cover for THE BLUE BAR will be officially revealed soon. One free and easy thing you can do to help its journey is to go click the WANT TO READ button on Goodreads. Pre-ordering will help, too, of course! Thanks to those of you who have already pre-ordered. Please hold on to your receipts, because there will be swag giveaways.