F for First, I thought it was a joke: atozchallenge 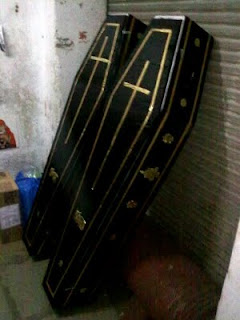 Today word prompt (The beginning of the story in bold) come from Melody-Ann Kaufmann  and the picture is from the collection by the amazing Rayna M Iyer.

I picked them because it seemed like a brave thing to do. I had no idea if I could write a story based on the prompts, but when has that stopped me from trying?

First, I thought it was a joke. A prank for April fools my lawyer-moving-up-the ladder roomie Dan had played me, in fond hopes of bettering the best in the business, the poor sod. He’d got a pair of coffins delivered to my door, black mahogany, embossed with gold crosses, with golden locks by the side.
Last year, he’d taken a bath at the fountain I’d rigged at the kitchen when he went to get me water, which had led to a drink or two and ended in bed. We’d stayed roomies though, passing each other butter and salt at the dining table, answering the door in welcome to the men and women who showed up in our lives , doing the laundry (except underwear) by turns, and arguing with the landlord over the plumbing. We joked, ignored the crackle between us when we passed too close in the kitchen or the corridor.
He’d promised to punk me this year, so the coffins didn’t faze me one bit. I swung open the main door, looked for a note stuck to either of the coffins, but instead found a golden key. For a moment I was tempted to leave the coffins outside. That would teach the whippersnapper.
When I’d hauled them in, one light and the other heavy, I already knew what one of them contained. So I opened the other. Poizin, the coffin-shaped box inside it said, To die for, with a skull painted in red. I opened it, and found two bottles of wine, both bearing the same name.
Come out, I said, opening the other coffin. As expected, Dan was in there.
But he didn’t shout Punked!
Instead, holding up what looked like at least two dozen near-wilted red roses in his hand, he kneeled , Marry me?
Much later, once we found ourselves in between the sheets in his room, glasses of rich red Poizin Zifandel in our hands, I asked, how did you know I’d say yes?