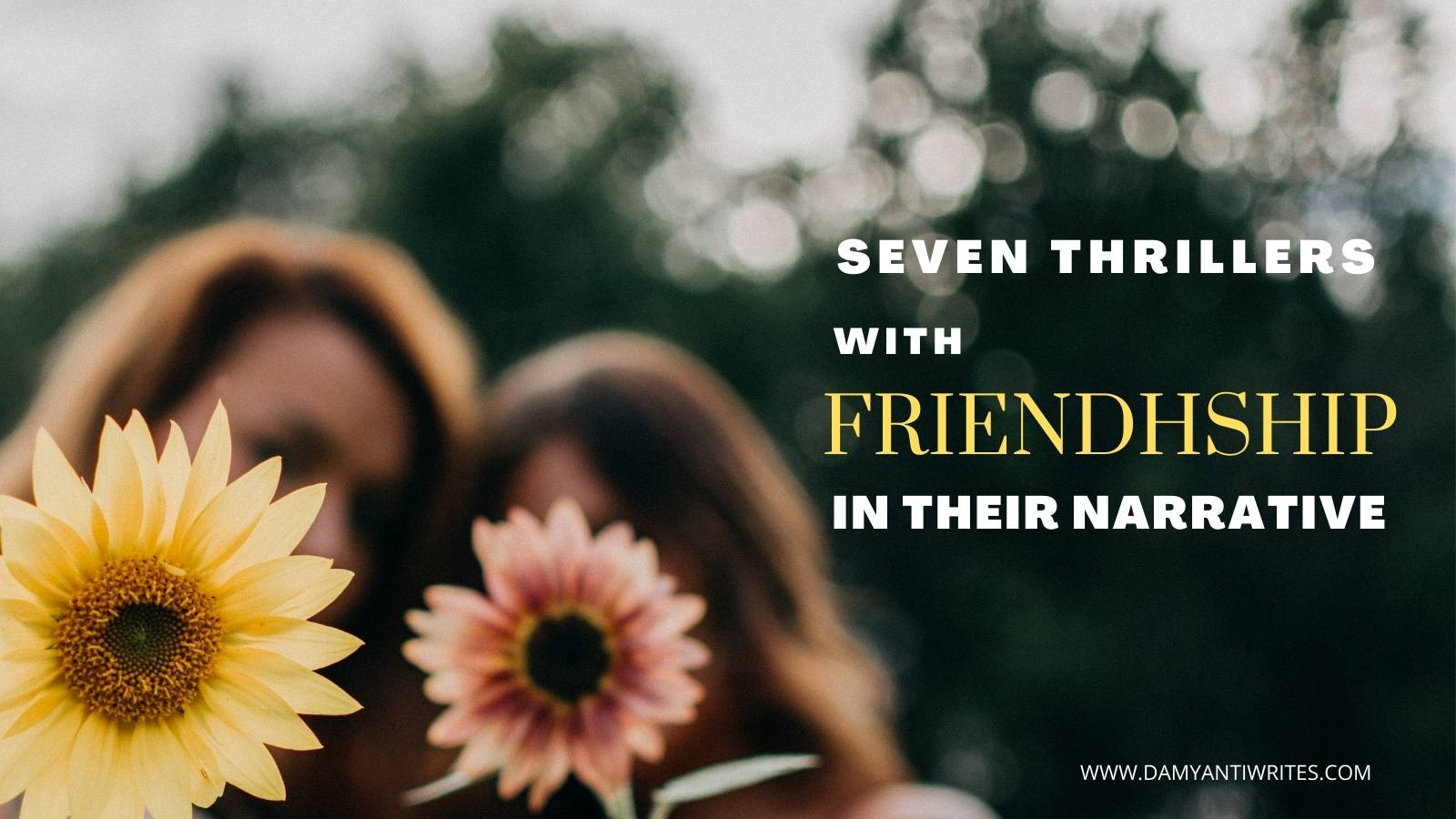 All About Friendship in Thrillers

Friendship can be an easy word or a difficult one, depending on the choices you make. Friends are the family you choose. A friend can be a home, a place of unconditional support, a listening ear, a counselor, a companion.

In romance, or contemporary novels, we mostly see the positive aspect of friendship. Friends are often sidekicks, or cheerleaders. They are quirky or cute or both, depending on the author’s plans for them.

In contrast, friendship in thrillers is often fraught. Thrillers are page-turners: they are about what goes wrong, and how badly. Authors must keep the tension high. So friendship in thrillers takes a darker turn–often, one or more of the friends is in danger, or dies. Sometimes, there’s betrayal. At others, a falling out or conflict.

The way friendship turns out in thrillers depends on the story the author is trying to tell. I’m fascinated by friendships because I’ve been blessed with good friends, but have also had a major falling out once in a while. The ‘what if’ question has led to further story ideas.

I’m going to speak about a few thrillers I’ve read that feature friendships, and then move on to my own writing.

My first literary thriller, You Beneath Your Skin, published by Simon & Schuster India, and my second, The Blue Bar, to be published by Thomas & Mercer in the USA, both feature friendships.

Friendship in Thrillers: THE LOST by Natasha Preston

“In the small town of Aurora, teens go missing all the time. But when one of Piper and Hazel’s classmates disappears, they become determined to find out the truth of what happened to her.

While investigating, they meet three handsome and rich grad students…who kidnap them. The girls are taken to a building in the middle of a privately-owned forest. The building isn’t just designed to keep them locked away—every room is a test in survival. And Piper and Hazel won’t give up without a fight.”

Piper is a resilient character in this thriller which is all about a bunch of teens,  kidnapped an tortured. The friendship between Piper and Hazel is put under massive strain in this story, and despite the less credible bits, it is a great study of how friends change in intense situations. Piper and Hazel act very differently when they suffer some pretty horrific situations.

Without spoiling the novel all I can say of the friends Piper makes, is that trust is the most important factor in friendships. These teens learn that lesson fairly early.

Friendship in Thrillers: WE WERE NEVER HERE by Andrea Bartz

“Emily is having the time of her life–she’s in the mountains of Chile with her best friend, Kristen, on their annual reunion trip, and the women are feeling closer than ever. But on the last night of their trip, Emily enters their hotel suite to find blood and broken glass on the floor. Kristen says the cute backpacker she’d been flirting with attacked her, and she had no choice but to kill him in self-defense. Even more shocking: The scene is horrifyingly similar to last year’s trip, when another backpacker wound up dead. Emily can’t believe it’s happened again–can lightning really strike twice?”

This twisty thriller is all about toxic friendship–two women get away with murder, not once but twice, but while the first time had seemed to Emily like her friend was a lifesaver, even though she helped cover up a murder, the second time gives her distinctly creepy vibes. Again, in this novel, as in the last, there’s the question of trust. Who really is your friend and who is not, and why? This was a Reese Witherspoon book club pick, and I could see why–Bartz keeps dishing out nerve-jangling twists. More importantly to me, though, this thriller was an insightful portrayal of a friendship gone horribly wrong.

Friendship in Thrillers: GIVE ME YOUR HAND by Megan Abbott

“Kit Owens harbored only modest ambitions for herself when the mysterious Diane Fleming appeared in her high school chemistry class. But Diane’s academic brilliance lit a fire in Kit, and the two developed an unlikely friendship. Until Diane shared a secret that changed everything between them.

More than a decade later, Kit thinks she’s put Diane behind her forever and she’s begun to fulfill the scientific dreams Diane awakened in her. But the past comes roaring back when she discovers that Diane is her competition for a position both women covet, taking part in groundbreaking new research led by their idol. Soon enough, the two former friends find themselves locked in a dangerous game of cat-and-mouse that threatens to destroy them both.”

Kit’s journey with Diane in this skilfully drawn portrait of a toxic friendship is one of Aboott’s best. I loved the intimate descriptions of insecurities and suffering that was the bedrock of this friendship. Through descriptions of their past together, and their tension-filled, perilous present, Abbott takes us deep into their psyche. There is no black and white here, only shades of grey, some of them very dark indeed.

Friendship in Thrillers: THE PERFECT FRIEND by Barbara Copperthwaite

“She’ll do anything for you…

My name is Alex, and my world has been shattered.

My husband has left me.

My children won’t speak to me.

My friend Carrie is the only person I have.

She’s the only one I can trust to keep all my secrets.

She’d never do anything to let me down.

This dark, gripping psychological thriller will have you holding your breath until the very last page. Fans of Behind Closed Doors, Sometimes I Lie, and The Girl on the Train will be captivated.”

As the title suggests, this is a thriller about one particularly convoluted friendship, which appears heartwarming at first glance. There’s honesty and vulnerability, there are weaknesses and secrets, and the friendship of these women is buffeted through it all. When there is too much love, and way too much expectation, we can expect things to go wrong, and they do, spectacularly. This is a different kind of toxicity than Bartz’s book above, or from Abbott’s, but it keeps getting uglier, the way you would expect from friendships in thrillers.

I have interviewed Barbara Copperthwaite on this site in case you need insights into her work, and how she maintains the tight-rope tension in her work.

“In a crowded residential suburb on the outskirts of Tokyo, four teenage girls indifferently wade their way through a hot, smoggy summer and endless “cram school” sessions meant to ensure entry into good colleges. There’s Toshi, the dependable one; Terauchi, the great student; Yuzan, the sad one, grieving over the death of her mother—and trying to hide her sexual orientation from her friends; and Kirarin, the sweet one, whose late nights and reckless behavior remain a secret from those around her. When Toshi’s next-door neighbor is found brutally murdered, the girls suspect the killer is the neighbor’s son, a high school boy they nickname Worm. But when he flees, taking Toshi’s bike and cell phone with him, the four girls get caught up in a tempest of dangers—dangers they never could have even imagined—that rises from within them as well as from the world around them.”

Friendship in this thriller is a surreal or perhaps hyper-real portraiture. Here are four teenage girls helping a teenage boy who killed his mother. This book is a strong commentary on consumerism and capitalism, and gets very intense in bits, but it is also a vivid picture of how teenage friendship works: the many insecurities, the blasé indifference to, or rebellion against authority, and the toxic yet vulnerable solidarity among friends.

Friendship in Thrillers: YOU BENEATH YOUR SKIN (my first novel)

“It’s a dark, smog-choked New Delhi winter. Indian American single mother Anjali Morgan juggles her job as a psychiatrist with caring for her autistic teenage son. She is in a long-standing affair with ambitious police commissioner Jatin Bhatt – an irresistible attraction that could destroy both their lives.

Across the city there is a crime spree: slum women found stuffed in trash bags, faces and bodies disfigured by acid. And as events spiral out of control Anjali is horrifyingly at the center of it all …”

Friendships in thrillers are complicated, as we have seen above, but in You Beneath Your Skin, friendship is not the focus of the novel. It has its own ups and downs, and share of betrayal, but the relationship between Anjali and her friend Maya is based on genuine affection and mutual respect. I am a huge fan of women helping each other–most of my reading consists of books by women–and I wanted to show how friendships can sometimes survive major upheavals. Anjali and Maya bond through loss and the challenges life has thrown their way, and when their friendship is sorely tried, they are able to find forgiveness and redemption.

Friendship in Fiction: THE BLUE BAR (my upcoming novel)

“On the dark streets of Mumbai, the paths of a missing dancer, a serial killer, and an inspector with a haunted past converge in an evocative thriller about lost love and murderous obsession.

After years of dancing in Mumbai’s bars, Tara Mondal was desperate for a new start. So when a client offered her a life-changing payout to indulge a harmless, if odd, fantasy, she accepted. The setup was simple: wear a blue-sequined saree, enter a crowded railway station, and escape from view in less than three minutes. It was the last time anyone saw Tara.”

The Blue Bar also features a friendship, this time between Arnav the Police Inspector and protagonist, and his friend and colleague, Hemant Shinde. This relationship doesn’t define the novel, but forms the basis of a major part of the plot. Since the book is set in Mumbai, and in the peripheries of Bollywood, it has dramatic overtones. Friendship is not all cosy vibes, especially not in a thriller, and I’ve kept this in mind while writing about Arnav’s friendship.

Do you read or write crime fiction? Have you read many thrillers, or thrillers about friendships? Have you ever had a friendship go wrong?

Two more days to go for THIS GIVEAWAY that includes The Blue Bar–it is easy to enter and win!

If you liked this post, you can receive posts in your inbox, or stay updated on my writing by clicking on any or all of the following buttons: