Revision Strategy: #WritingTips from an Author and Writing Mentor 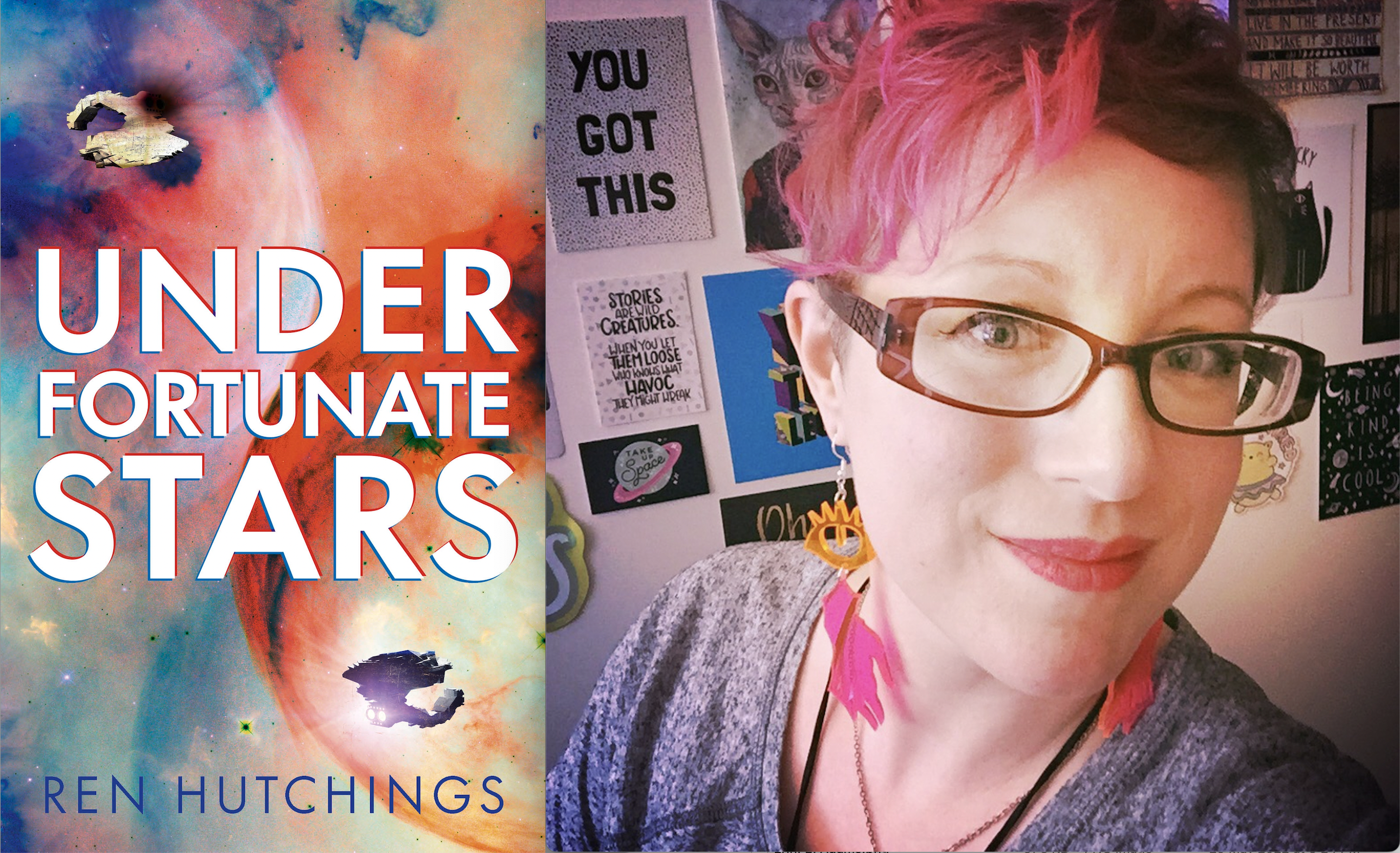 A good revision strategy is the most important part of my writing process because I write crazy first drafts. Even when I follow an outline, I end up adding all kinds of extraneous story elements, narrative diversions, red herring alleyways, convoluted character descriptions. My brain thinks in complex layers. To tear it all down and make it into a cohesive, propulsive and engaging story line, I need all the revision tools in my arsenal.

This is why it gives me great pleasure to introduce Ren Hutchings, author, writing mentor and very kind friend who explains how to make deep cuts and revise a complicated story without breaking your book. A speculative fiction writer and history grad, she’s spent most of the past decade working in game dev while also plotting twisty space novels.  She loves pop science, unexplained mysteries, 90s music, collecting outdated electronics, and pondering about alternate universes. Ren’s debut novel, UNDER FORTUNATE STARS, is out from Solaris in May 2022. You can find Ren online at renhutchings.com.

Take it away, Ren!

Are you an overwriter? Does your finished manuscript feel too long to query? Do you need to make deep cuts to hit the expected word count for your story’s genre? Editing down a monster of a first draft can be a daunting prospect, but it’s absolutely possible.

I’m a discovery writer, and I always write a lot more material for a story than I end up using in the final version. I’ve spoken to many writers about how the first draft of my debut novel came in at almost 200,000 words – and how I did a major revision to pare it down to 134k ahead of querying it.

Trimming down a long book by this much has a lot of challenges, especially if you’re working with a twisty or non-linear narrative, or if you have multiple points of view in your story. There are a lot of interconnected parts to keep track of, and even if you weren’t aiming to cut words, revising anything always feels like it risks bringing the whole structure down like a house of cards.

The revision strategy below specifically describes how to identify the scaffolding of your story and safely move it around – how to rearrange a complicated plot without breaking your book. So, whether you’re aiming to cut a ton of words or just revamping your story’s structure, you can use the following revision strategy. Apply the steps as a starting point for the kind of revision that takes your book down to the bones and rebuilds it.

Revision Strategy Step 1: Make a list of every scene, starting with the first act.

List every scene, starting a new scene heading whenever there’s a change of setting, whenever significant time passes, or whenever you switch POVs. Under each scene heading, you will be listing the essential points that the scene contributes to your manuscript.

Go through every scene carefully, and add a bullet point under the scene heading every time something HAPPENS or IS REVEALED. You’ll want to set a pretty strict definition of “happens” for this step. List only the things that are absolutely pivotal, things that the plot cannot ignore or progress without.

Examples of a HAPPENING:

You can use the same rules for reveals. A “reveal” can be something much smaller than a happening, but it’s still got to be a fact or a piece of information that is essential to the story; something without which you don’t think the story would work.

Examples of a REVEAL:

Narrowing down whether a particular point “counts” for the list or not can feel pretty difficult, because of course a story is made up of so much more than plot-essential moments and reveals – and those other parts of the story are vital, too! But remember, just because something doesn’t make the list doesn’t mean you’re going to delete it.

You’re identifying the key points holding the story up, so that when you come to shuffle things around, you don’t miss anything. You may end up writing new scenes around these points, or you might keep some scenes exactly as they are – but you do need to know which essential info is contained in each scene before you edit anything.

As you read through your scenes and make note of all the Happenings and Reveals, next you’ll be looking for CALLBACKS – anything in your story that depends on the reader already knowing or having seen one of the points on your list, either in the same scene or earlier in the book.

Having notes about these links to earlier plot points will be invaluable when you come to moving scenes around – you can check that all the Callbacks stay properly anchored to the points they depend on, and that you always give a reader the necessary info in the right order. Armed with that knowledge, you can experiment and move your story’s scaffolding around as much as you want without worrying about accidentally breaking connections.

Examples of notes for a CALLBACK:

If you follow this process, scene by scene, you should end up with a detailed list of everything that you absolutely cannot remove. You’ve now got a list of all the pieces on the table: everything without which the story cannot function. (You can color-code your Happenings, Reveals and Callbacks, too, if it helps to visualize it.)

With everything laid out in front of you, go through your list of points to assess how necessary each scene is. You might be very surprised at what you find. If a scene has zero Happenings, Reveals or Callbacks in it, you probably don’t need it at all. Whether or not you’re trying to make major cuts to word count, chopping this scene entirely is likely the way to go.

Look for scenes that only have a small handful of points in them. If there’s only one or two essential points in a scene, it’s probably a good candidate to be cut or combined with another scene – and you know exactly which points you need to relocate elsewhere.

Naturally, some scenes will focus more on quiet character development than big plot explosions. But those scenes should still be giving new insight to the reader about the characters and their feelings/desires, however small, so you should always have something in the Reveals list if a scene needs to be there.

Revision Strategy Step 5: Rewrite your first act, using the list of points as a guide

While revising my book, I rewrote a large chunk of my first act from scratch: I wrote new opening scenes, a new setup for some of the characters meeting, and a completely new intro to some worldbuilding elements. But I had my list of points to refer back to, even if the scenes moved around and changed order.

As each point found a home in the new draft, I marked it off from the list. At the end of this step, every plot-crucial point had either made its way back into the revised material, or was transferred into another document for inclusion in a later act.

Most importantly, because my story was multi-POV and non-linear, I really had to ensure none of the callback links were broken. These links were especially important for keeping continuity, and not ending up with fragments of knowledge or reveals that would confuse the reader because they hadn’t been given the necessary info yet.

When I finished this process for Act 1, I had already cut more than 20,000 words from my draft, and I had about one page of leftover bullet points that I still needed to move into Act 2. Those points didn’t end up being necessary to make Act 1 work, but they were still critical for the setup and delivery of later plot, so they moved along to a later point in the book.

Revision Strategy Step 6: Repeat for the rest of the book!

I always suggest working one act at a time if your book uses a clear act structure, or you can work on a few chapters at a time, grouping sections that cover one arc of the story. Going through your manuscript incrementally makes it much easier when you end up having to carry things over to a later section, and will keep the process from getting overwhelming. You can do multiple passes using the same method as well, if you end up needing to prune things down further or rearrange scenes again.

A related technique that I highly recommend using in tandem is Jenny Howe’s reverse outlining method, which helps to check for pacing and plot holes as you redraft. You can read about Jenny’s method in this blog post!

I hope these tips are helpful for you as you come to tackle a big revision. Good luck!

Writers, what is your experience with revision, and what is your revision strategy? Do your drafts ever need major revisions? How do you tackle them?