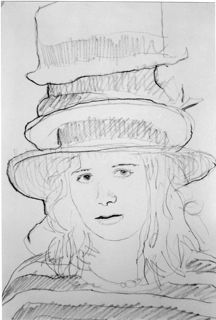 Rick Mobbs has put up picture prompts for me, and it is my privilege to be able to write something based on them—I’m starting off today with his sketch.

I’m not sure how this will turn out, because I’m writing it down as it comes to me. I do hope you don’t hate it too much, Rick, and thank you so much for the honour.

Meet Anna Williams and her hats, everybody.

Once you wear your hat you’ve gotta keep it on, they tell Anna, you have to become a legend because that is why you were born. Everyone in your family has done it. We married into it, Annie-girl, we bought it, traded it, bred it, so just you go ahead up on the stage and spit it out, and no matter what they’ll recognize it, because we wrote it into your chromosomes, baby, just go ahead, all right? Keep your hat on and you’ll be okay, they say, and give her a shove.

That was ten years ago and now she walks tall, a hard-headed girl, wearing many hats, a singer, songwriter, seductress, dancer, actress, diva, designer. A legend in the making, they say, we told you Anna-darling, just listen to us , they say, just keep your hat on and you’ll do well.

Sometimes though, she wears all of the hats together, and that’s when she has the most fun, though neither them nor anyone else knows it. To shrill whistles and hoarse cat-calls, under flashing strobe lights, surrounded by stale perfume, cigar smoke, and beer fumes, Anna purls her much-insured body the color of midnight, that otherwise appears on screen in flashes, covered by iron-clad contracts.

She wears a mask as she twirls around the cold, hard pole, and her hats–one hat upon the other– a red hat with tassels, an oriental hat with ostrich feathers, a fedora, a top-hat, a blue balaclava, a wretched beanie embroidered with pearls, never letting any of them fall as she moves.

The elderly men in loosened, delirious ties do not know what awesome return-on-investment the cash they drop at the bar brings them. Anna Williams in the flesh, all of it on display.

Anna breathes in her freedom as she raises her leg strapped to stilettoes, she smells her abandonment in the upturn of her arms and the hardening of her nipples, in the bracing of her stomach she finds the strength of her spirit.

I have kept my hats on, Mom, Dad, I’m okay, Anna mutters under her breath as she whirls, eyes flaming. Glued to her head by the power of her will, her hats tilt, sway, but do not fall. Because once you wear a hat, baby, you better keep it on.