Do You Read or Write Short Stories? #writing #IWSG 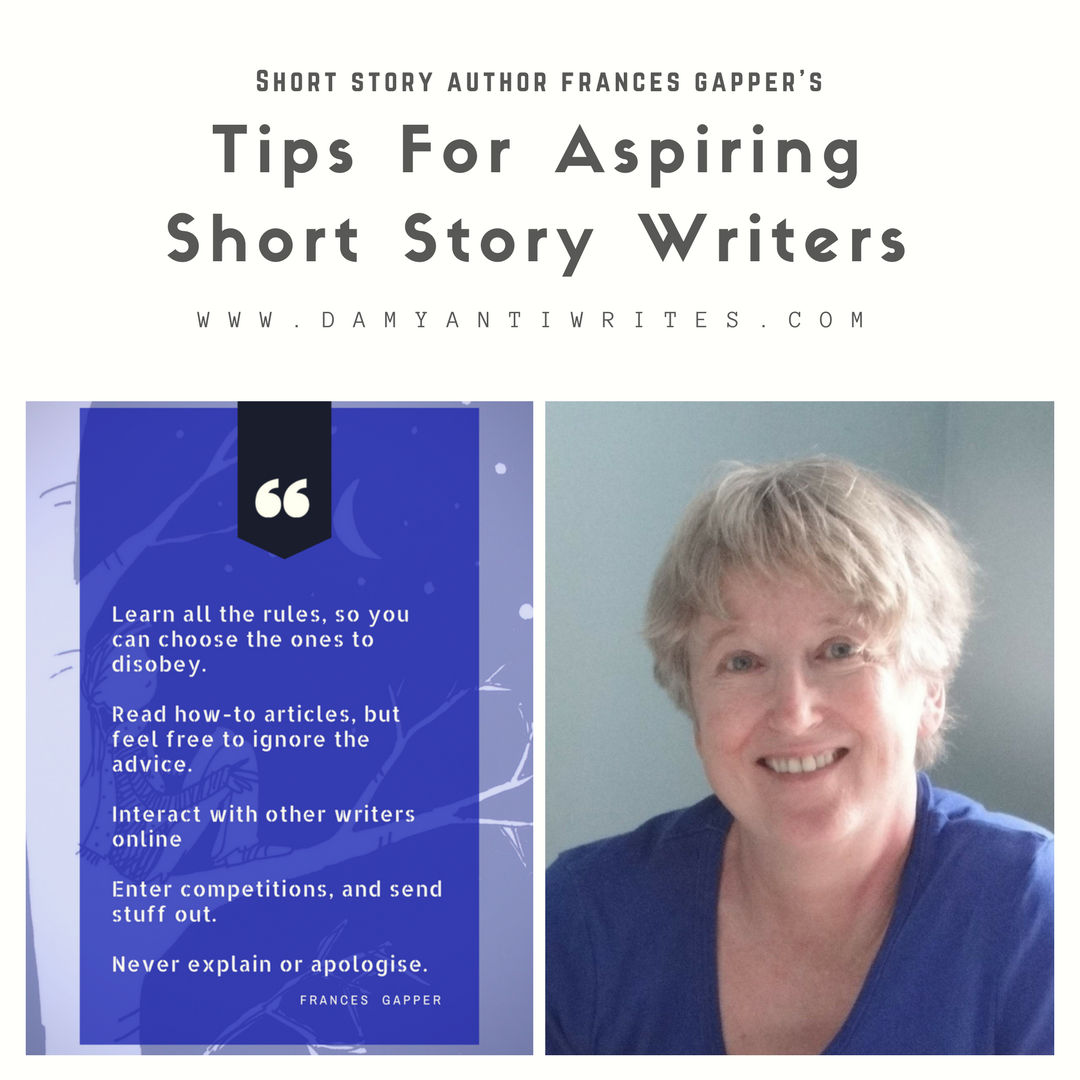 Here on Daily (w)rite, as part of the guest post series, it is my absolute pleasure today to welcome Frances Gapper, a brilliant, nuanced, and versatile author. Her latest collection of short stories, “In the Wild Wood” has blown me away, and I recommend it for lovers of quirky, unusual fiction with a touch of the surreal. She’s been widely published: you can read some of her work online in the Irish Literary Review and the London Magazine. 1. At what age did you start writing fiction? What prompted you?

I was lucky to attend a very good primary school, St Mary Magdalen’s in Mortlake, southwest London, UK. Mortlake: a death lake, but a good one to learn to swim in. Creativity of all sorts was encouraged and I wrote poems and stories. This would be from the age of five or so. I first tasted the delights of fame when an early poem of mine starting “The fish in our tank swim round and round / Round and round without a sound…” was stuck up by the school goldfish tank. I could quote the last line too, but I won’t because it was a bit weak and falsely jovial. Also I won first prize (five shillings) in a book review competition, no one else having bothered to enter. My friend Jane Eccles, whose beautiful drawing Night Tree is on my book cover, went to this school too.

2. What are your preoccupations as a writer? Which of your short stories/ collections would you recommend to a reader who has never come across your work?

My preoccupations as a writer – loss mainly, I guess. Loss in one form or another. I tend to assume all fiction concerns itself with loss and/or death, although I’m probably completely wrong about that. But certainly mine does. As for a recommendation of something to start with, I think ‘The Tiny Key’, a booklet of very short stories (bundled with two other booklets) published by Sylph Editions in 2009.

3. Which authors have been your biggest influences?

There are writers you love to read but whose work doesn’t influence your own writing (or at least you’re not conscious of it), others whose brilliance has a dimming effect on you. More rarely, an amazing writer comes along whose work refreshes and inspires you. It’s so for me with Stevie Smith, Ali Smith too. And all the writers listed below have influenced me in one way or another, as have very many others.

4. Could you name short story authors we should all check out?

Probably your readers will know all or most of these authors already, but here’s a short and eclectic list: Ali Smith, Grace Paley, Helen Oyeyemi, Stevie Smith, Sylvia Townsend Warner, Jackie Kay, Leonora Carrington, Chekhov, Thomas Hardy, D.H. Lawrence, Katherine Mansfield, Raymond Carver, William Trevor.
See too my essay on Robert Aickman: “Aickman thought the ghost story akin to poetry in its compression and intensity, and his work has been described as ‘English Eerie’ and ‘English Kafka’…” (Aickman’s motto ‘Never explain or apologize’ – which was also the motto of Sylvia Townsend Warner’s mother – is a good one for short story writers, I think.)

And my essay on Dorothy Edwards: “Hovering awkwardly on the fringe of the Bloomsbury Group, virtually penniless and dependent on a friend for accommodation, Dorothy Edwards lacked the two things Virginia Woolf considered vital for a woman writer of fiction: money, and secure private space…”

6. What tips would you give to those starting out on short stories?

I’m glad you asked me this question in August 2017, because I can reply truthfully that I write every morning. Until I’ve written at least 120 words, or a complete flash – that’s my rule for the time being. I used to get up very early in the mornings so as to write before going to work – one job, for instance, started at 7am, so I got up at 4, leaving the house at 6.15. Since I ‘retired’ I’ve had loads more time, but a great deal less self-discipline.

8. Could you share with us the inspiration behind some of the short stories in your latest collection ‘In the Wild Wood’?

The title story ‘In the Wild Wood’ was inspired by my mother’s dementia and my own experience of mental breakdown while I was living with her and trying to look after her. Inspired very directly, since much of it is plucked from a diary-notebook I kept during that terrible time in 2007/8. I didn’t dare reopen that book for several years, having no wish to step back into the maelstrom. But eventually I did, thanks to my partner Deryn’s encouragement – I’d given it to her to read when we first got together, having decided she might as well know the worst.

‘It Was’ is another story made up of mini-stories, but this one is much lighter. It sprang from a time when I was flirting and sort of falling in love (which I certainly shouldn’t have been doing) with a painter-decorator friend of mine. Everything between us remained just below the surface, bubbling up in fiction. I then fell out of contact with her – the breakdown swept everything away – but recently she sent me a lovely message about the book, this story in particular.

I think ‘The Poetry Course’ is the oldest story in ‘In the Wild Wood’. This one was inspired by a minor disappointment, my application to join a course in Advanced Fiction being turned down. So I became the dragon who didn’t get on the Arval course and a friend who boomed outraged sympathy down the phone became Aunt Julia. Frances Gapper‘s  Absent Kisses, her first story collection, was published by Diva Books in 2002 and The Tiny Key, a flash fiction chapbook, by Sylph Editions in 2009. Her most published story is ‘Pink and Blue’, which appeared first in Pretext 5, edited by Ali Smith and Julia Bell, then in Absent Kisses and then in ‘Let’s Call the Whole Thing Off: Love Quarrels from Anton Chekhov to ZZ Packer’, a Penguin anthology edited by Ali Smith, Sarah Wood and Kasia Boddy.  Her novel Saints and Adventurers was published by the Women’s Press in 1988 and a children’s novel, Jane and The Kenilwood Occurrences, by Faber in 1979. The latter featured in Paul Magrs’s 2014 list of ‘100 books for children that I think are great’.

This post was written for the IWSG. Thanks to Alex J. Cavanaugh for organizing and hosting the Insecure Writer’s Support Group (IWSG) every month! Go to the site to see the other participants. In this group we writers share tips, self-doubt, insecurities, and of course, discuss the act of writing. If you’re a writer and a blogger, go join rightaway! Co-hosts this month are:  Tyrean Martinson, Tara Tyler, Raimey Gallant, Beverly Stowe McClure.