View the Darkside: #scifi with T.A.Miles 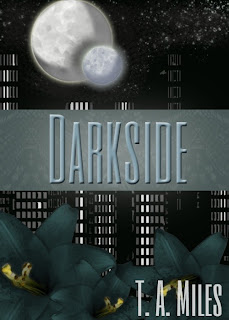 I’m not a hardcore science fiction fan, but would pick one up every once in a while– I like to mix up my reading quite a bit. For today’s Wednesday feature, I bring you Darkside, a Science Fiction Thriller by T. A. Miles, who runs the independent publishing house, Raventide Books, and is the author of nine books under that label.

Elevator pitch: Calen flees from his home on the eve of an unprecedented political
maneuver in Xandria, leaving a murder scene behind and setting into
motion a chain of events that could decide the fate of humankind on the
post-Earth world of Bhast.

Teaser Excerpt:  Footsteps reverberated throughout an abandoned
lobby.  The deep corners of the room were in shadow and the open floor
above existed in pitch darkness.  The only details provided to the six
men entering the derelict Elysium library were those cast in the soft
yellow glow of floor lamps standing between drab leather couches and a
desk lamp several paces beyond.  The overheads might not have worked,
but it seemed more likely that they had been left off deliberately.
Yoshiro kept his eyes ahead as he led his men into
the shadowed space.  Specifically, his focus was on the four figures
occupying various seats among the couches he and his men moved toward.
Already, deception was in play.  While the three men and one woman were
in plain view in what light the room offered, there were three others
yet hidden within the shadows elsewhere in the library, traces of their
emotional signature ebbing through the stillness onto the edges of
Yoshiro’s perception.  It didn’t surprise him to detect the others,
however, it did confirm the tone for what was to come.  A brief glance
over his shoulder let the men behind him know to stay alert.
“Ah, there you are, Yoshiro.”  The words were
delivered by one of the men in the seating area, the elder of them.  He
stood with a genial smile on his face.  “We’ve been waiting.”
—–
Buy Darkside from Amazon US and Amazon UK.