Would You Read this Contemporary Romance? 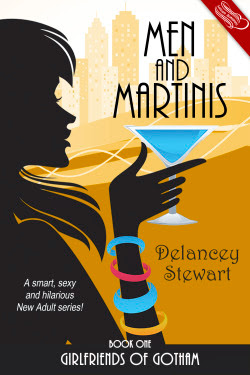 Men
and Martinis is the first release in Delancey Stewart’s series
“Girlfriends of Gotham” – a voyeuristic voyage through the lives of a
group of twenty-something girls who dance, date, and drink their way
through Manhattan during the days of the dot com boom.
Teaser Excerpt:
“Ladies!”
The bartender tried to get the attention of the stomping girls making their way
down her bar top, threatening to spill the drinks of less enthusiastic
customers as they danced. Unfortunately, their attentions had turned to one
another. They were locked together, Lulu’s knee between Candace’s thighs, and
they were making out furiously. Once I got over my initial shock, I hooted
along with half the bar. The men below them were delighted, holding out dollar
bills and yelling. Candace’s previously conquered finance guy appeared to
believe that his evening might be salvaged yet, as she disengaged herself from
Lulu and shook her hips, leaning down to catch the financier’s eye.
The hand
on my arm turned out to be the bouncer, who told Maggie and me in no uncertain
terms to stop dancing.
“What?”
I asked, incredulous. My voice was loud, the vodka in my bloodstream giving me
a volume I didn’t know I was capable of.
“No
dancing!” The bouncer repeated himself. “We don’t have a cabaret
license.”
“What
the hell?” Maggie yelled.
“What
is this, Footloose?” I said,
grinning at my own cleverness.
Maggie
elbowed me and we both laughed. The bouncer didn’t find the reference funny. He
was pulling our purses and sweaters off of our chairs and pushing them into our
faces.
“Get your
friends down and get out!” he yelled, his black T-shirt straining over his
huge arm as he pointed toward the door.
The
dancers had moved back to our end of the bar, still oblivious to the
bartender’s best efforts to get them down. I put my coat on as another man with
oversized arms began to reach for Candace, supporting himself on the back of a
barstool as he leaned out for her arm. I assumed he was a bar patron trying to
get in on the action between Lu and Candace.
“Back
off!” I shouted, throwing my body weight behind my hips and slamming
myself into his side. He had been perched precariously and clearly wasn’t
expecting a side attack, because he hit the floor hard, bringing the barstool
down with him. The crowd scattered. The noise attracted the attention of
Candace and Lulu, and within seconds they were climbing down off the bar, legs
flailing for purchase on any available surface—or lap—and customers were
quickly jumping away to avoid getting stepped on.
I watched
the guy I’d slammed scramble to get up off the floor. Maggie grabbed my arm and
pushed me toward the door. “You just body-checked a bouncer!” She was
half-laughing, half-crying.
“That
guy was a bouncer?” Suddenly it made sense. It also explained why the
first bouncer who’d shown us the exit was forcefully ejecting Candace and Lulu
as we watched from the sidewalk, pulling our sweaters tight against the growing
October chill and laughing.
“‘What
is this, Footloose?'” Maggie
screamed, laughing. We looped our arms together and the four of us staggered
down the sidewalk, cackling.
“Did
we just get kicked out of that bar?” Candace asked.
“Uh,
yeah,” Maggie assured her. “I think that when Natalie shoved the
bouncer to the floor it pretty much sealed the deal.”
“You
did what?” Candace stared at me, open admiration in her gaze.
“I didn’t
know he was a bouncer.” I smiled innocently.
“Oh
my God, that’s hilarious!” Lulu said.
We
wandered a bit, and then realized it was almost three and should probably call
it a night. After a round of hugs, we climbed into cabs and headed home.
I hoped
that the excitement of the evening had helped Candace lessen her white-knuckled
grip on Damon. It had sure been educational for me.
—
The book will be out on 3rd December, and I wish Delancey the very best with it. If you read romance, go pick up this book for a ride through an ‘an era when the up-and-comers in New York were partying like Studio 54 had never died.’