What has Your Experience of Reading and Writing Novels Been Like?

Here on Daily (w)rite, as part of the guest post series, it is my pleasure today to welcome interior designer, design lecturer, and author Adrienne Chinn of The Lost Letter from Morocco and The English Wife.

When I’m at home, my writing day pretty much follows the same pattern: Get up around 7:30, do yoga/exercises, shower, have breakfast (I eat out on my balcony in nice weather), putter in my garden for half an hour. Then I come in, set up my laptop on a cushion on my legs on my bed with scribbled notes around me, check emails, do random admin, play Jewel Legend for around 20 minutes, write a haiku or short poem that I post on Instagram (I started writing these about eight years ago as a writing exercise and they now have become part of my writing ritual), open up my Chapter Summary file, my Research & Notes file, and my novel in progress. It’s around 11:30 by now. I’ll re-read what I wrote the day before, review/research anything I need to for the chapter I’m writing, then I write until around 6pm. I aim to write between 1,000-1,250 words a day which is 4 or 5 pages double-spaced.

When I’m travelling, I’ll write wherever and whenever I can!

2 . How do your other roles in interior designing and running yoga retreats contribute to, or affect, your writing life?

They’re a great balance to my writing life. I’ve run my own interior design business for over twenty years, and now only take on one large project at a time (which can often last two years). I teach interior design one or two days a week at a design college in London during term times, which I love. Writing is such an introverted activity that standing up and speaking to a class of twenty students really energises me. I love public speaking and often speak about interior design at London Design Week and exhibitions. I normally also teach interior design in Beijing and Shanghai about six times a year, which I love (I’m a typical Sagittarian who always has a suitcase half-packed!). It’s brought me a lot of new experiences which may yet appear in a future novel.

I run a Marrakech Design & Yoga Retreat in Morocco for a week every autumn (I do the design side and a wonderful yoga teacher named Alice Bowmaker leads the yoga), where we stay in a lovely riad in the Marrakech medina owned by a California artist. I’ve been visiting Morocco for over thirteen years – my first book The Lost Letter From Morocco – was inspired by my travels around the country. Three years ago, I decided to share my love of Marrakech by creating this retreat. It’s fun and inspirational, and we always leave with new friendships and suitcases full of lovely handicrafts. I’m thinking I may develop a writing retreat in Morocco as well – watch this space!

Getting out and doing things that aren’t related to writing helps keep the writing fresh for me. I come back to it energised and ready to bring new inspiration to my work.

3 . What extent of research do you put into your writing, and what are the research pitfalls writers must watch out for?

It depends on the book I’m writing. I didn’t do a great deal of research for The Lost Letter From Morocco, because so much of it was inspired by the travel I’ve done and experiences I’ve had over the course of all the years I’ve been visiting. The English Wife was very different. I did a lot of online research throughout the writing process about World War II in Norwich, war brides, uniforms, food and daily life in England during WW2… because half the novel is set in Norwich during the war. I also visited my friend, WW2 author Melvyn Fickling, in Norwich in February 2019, and we explored possible locations in the city.

For the contemporary Newfoundland story, I did a lot of online research about the 38 international flights that were diverted to the airport in the small town of Gander, Newfoundland, though I already knew quite a lot about it. I was born in Grand Falls-Windsor, which is about 100km from Gander, and I have quite a few relatives living in the area. I’d heard all about the “plane people” shortly after it happened. Then, I spent a month in the spring of 2019 travelling around Newfoundland visiting relatives and researching locations and inspiration for Sophie’s story. I took a huge number of photographs, and referred to these as I created Tippy’s Tickle and the characters who inhabited it.

4. You use secrets as a device in your novels. How do you suggest new writers incorporate this while creating characters?

Secrets are wonderful! They help build suspense, especially if the reader knows something a character might not, or, if the reader is surprised by the reveal. I like to drip feed the secret(s) through the book, revealing a little every now and then as the reader learns new things about a character, until there’s the big payoff at the end.

I think it’s interesting for readers to be surprised by the characters as they read further into the book – I like characters to not be quite what they seem, or to have back stories which colour their behaviour. It keeps readers on their toes. A lot of this can be revealed in dialogue (especially not saying what they’re thinking), interior dialogue, looking at things they’ve hidden from others, reading letters/diaries, and dreams/fevers.

5. Could you recommend five historical romance novels that you liked?

Green Darkness by Anya Seton, Gone With the Wind by Margaret Mitchell, Cold Mountain by Charles Frazier, Possession by AS Byatt, Birdsong by Sebastian Faulks.

6. Do you outline your novels before writing them? What is your process of writing a novel?

Yes. First I buy a lot of coloured post-it notes and use a different colour for each main character. I scribble one line on each note about the key things that character does through the novel and stick them on a wall in my office. This may take a week.

Then I create a Characters document and drop in a picture of an actor/actress who I think personifies that character. If the character ages in the book (like Ellie in The English Wife), I drop in two pictures. I note the full name of each character, their birthday, where they went to school, what music/films/books they like, what they’re good at, what they’re not good at, what food they like… anything I can think of that helps me visualise them.

Once I’ve done this, I create relationship links: I’ll put a string of the photos together for people in a family, for instance; another pair of photos for the lovers; photos with people who are close friends, etc. I refer to this document a lot as I write to ensure I’m keeping things like age and physical descriptions straight.

After this, I create a Chapter Summary document. Here I write 3 or 4 sentences for each chapter where I’ll note who’s in it, when and where it takes place, and what had to happen in that chapter. I always ensure that the chapter either moves the action forward or reveals something about the character(s), or both.

The whole planning phase takes about a month to six weeks, working about 4-5 days a week, longer if I have other commitments. Then, I start writing! The Chapter Summary is a great map for the book, but my characters will sometimes lead me down another path, and I love it when that happens. I’ll go with it, and see where it takes me, without taking my eye off the end goal. Sometimes, whole new elements arise which enrich the story.

7.  What is the world and setting of your new book The English Wife like?

In the WW2 story, local Norwich girl, Ellie, meets Newfoundland soldier, Thomas, who is stationed with his regiment near Norwich, and this sets the action going. When architect Sophie decides to contact her estranged aunt Ellie when she finds herself stranded in Newfoundland after 9/11, she meets local biker, Sam Byrne, at the airport and ends up on the back of his motorbike en route to Tippy’s Tickle on the northern Newfoundland coast. The 2011 story picks up in Tippy’s Tickle, where the 2001 story left off, when Sophie is sent there by her boss to persuade the locals to sell up to a consortium of investors who want to build a huge “eco” resort there.

8.  What is that one thing you’d like readers to know about before they dive into The English Wife?

That you’re going to dive into two interesting, complicated love stories, and learn a lot about the fantastic island of Newfoundland — Ugly Sticks, Screech, Jam Jams and all! 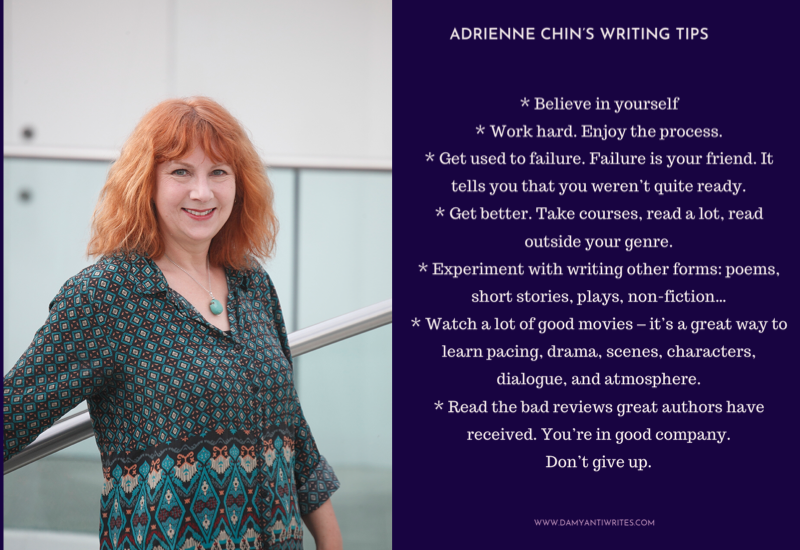 Adrienne Chinn was born in Grand Falls, Newfoundland, and grew up in Quebec, where she worked as a journalist. After moving to London, she worked as a film researcher before becoming an interior designer, design lecturer, and writer. When not at the computer she often can be found rummaging through flea markets or haggling in the Marrakech souk. Her second novel, The English Wife — a timeslip story set in World War II England and contemporary Newfoundland — is published in June 2020. Her debut novel, The Lost Letter from Morocco, was published in 2019. She is currently writing her third novel, the first of a 3-book series.

What has been your experience of writing novels? Does writing novels seem like a long and laborious, or exciting process to you? Do you have questions for Adrienne Chin? 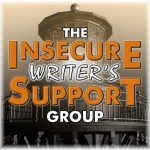 This post was written for IWSG: Thanks to Alex J. Cavanaugh for organizing and hosting the Insecure Writer’s Support Group (IWSG) every month!

Go to the site to see the other participants. In this group we writers share tips, self-doubt, insecurities, and of course, discuss the act of writing. If you’re a writer and a blogger, go join rightaway! The awesome co-hosts are Jenni Enzor, Beth Camp, Liesbet @ Roaming About, Tyrean Martinson and Sandra Cox.
IWSG question: “There have been many industry changes in the last decade, so what are some changes you would like to see happen in the next decade?”

Personally, I think the publishing industry has been suffering an upheaval ever since the emergence of Amazon, ebooks and self-publishing. Not all changes have been good, and not all have been bad, but the challenges for almost everyone in the industry have increased. Covid 19 is likely to push us further towards widespread transformation–but you know what they say–crisis brings opportunity. Maybe we’ll see more equitable distribution of profits to all stakeholders. Perhaps a rise of author cooperatives and small presses. Better representation of all backgrounds and perspectives.

My debut literary crime novel,”You Beneath Your Skin,” published by the fab team at Simon and Schuster IN, is making its way to TV screens via Endemol Shine.